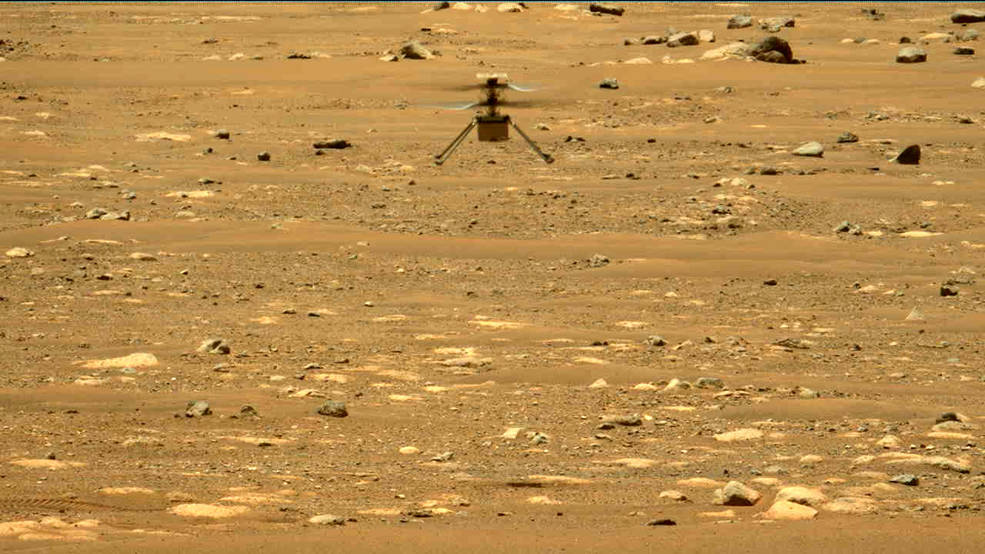 This time, Ingenuity rose to a height of five meters and remained in the air for almost a minute.

The first extraterrestrial helicopter “Ingenuity” made its second flight in the atmosphere of Mars. This time, the drone rose to a height of five meters, after which it flew off two meters to the side, and then returned to the starting point.

Ingenuity arrived on the Red Planet in February this year, and on April 19 made the first-ever flight in the atmosphere of Mars. This proved that aircraft are able to take off and land in a rarefied atmosphere, be resistant to light wind and low temperatures, as well as perform the simplest aerobatics in the form of turning around the vertical axis and take photographs of the terrain.

Unlike the first flight when it simply rose to 3 meters, stayed in the air for 30 seconds, and landed, Ingenuity’s second flight set new records in “Martian aviation”.

This time, the helicopter rose to 5 meters and again stayed briefly in the air. Then, the flight computer made it tilt five degrees, fly the distance of 2 meters and hold again. Subsequently, the helicopter was ordered to rotate so that its cameras could orient themselves in different directions and take photographs. All this took 51.9 seconds.

I remind readers that Ingenuity is the first aircraft heavier than air to fly a foreign planet (although not the first aircraft in the history of interplanetary astronautics in general – in the 1980s the Soviet Union studied the atmosphere of Venus with passively soaring balloons ).

Flying in the Martian atmosphere is difficult – its pressure is only 1% of that of the Earth’s atmosphere. After each flight, NASA accumulates new data that allows experts to verify them with ground-based models and simulations. This will help plan future helicopter expeditions.

I would also like to remind you that Ingenuity was a risky project and there was no guarantee that the first two flights would be successful. Even now, there is no guarantee that the next ones would be successful. In the coming days, more test take-offs will be conducted, which will become more and more complex. During some of them, fatal damage may occur and the helicopter may crash. But let’s hope that this conclusion is not reached.

In a few days, the third flight will take place, this time the departure distance from the starting point will be 20 meters. After the test program is completed, the Perseverance rover will leave the site of the helicopter, which will forever remain on the surface of Mars.

The scientific world has high hopes for the upcoming exploration of Perseverance. It is the first advanced mission of its kind to Mars sent to search for ancient signs of microbial life. While this goal may fail, the rover will undoubtedly make dozens of other significant discoveries in the next few years.