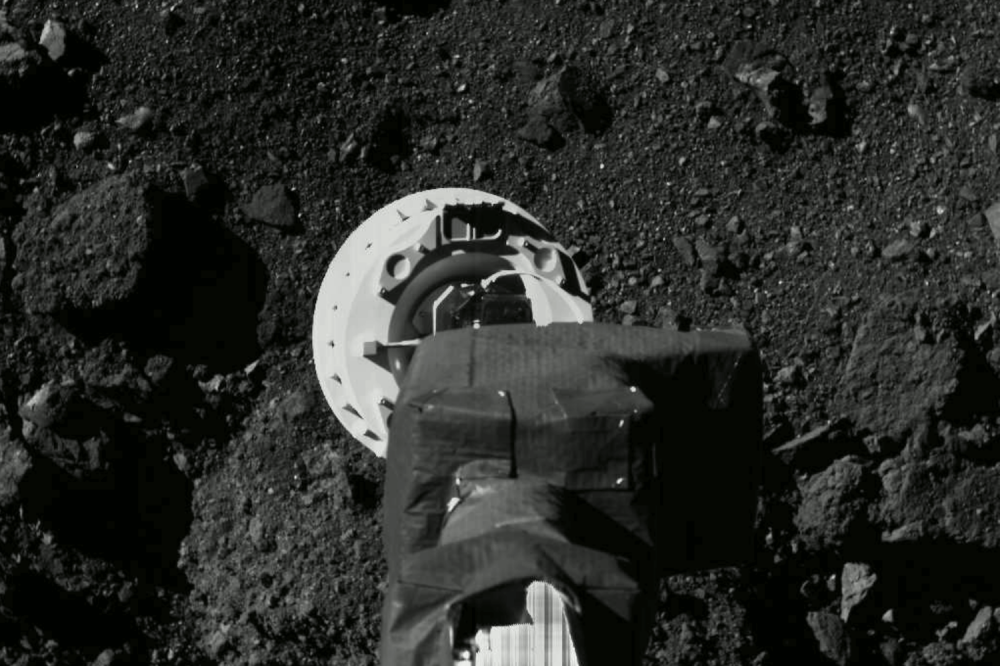 In a historical achievement, a NASA spacecraft landed on the surface of an asteroid located around 324 million kilometers away and collected material from the asteroid's surface, which is expected to be delivered back to Earth in 2023.

NASA has achieved yet another fascinating historical milestone as the OSIRIS-REx mission managed to successfully land on the surface of asteroid Bennu, collect surface materials from the asteroid, and return to space and orbit around the space rock. This marks the first time a NASA spacecraft has achieved something like it and speaks miles of what humankind is capable of doing.

The next phase of the mission is for OSIRIS-REx to head back to Earth and deliver the surface samples to scientists on Earth. The journey will be long, and the spacecraft is expected to reach Earth in a little over two years.

Bennu is an ancient asteroid–officially designated 101995 Bennu–located some 3234 million kilometers away from Earth. Its name comes from the ancient Egyptian mythological bird associated with the Sun, creation, and rebirth.

Bennu— a carbonaceous asteroid Apollo type asteroid–offers scientists a window into the early days of our solar system; the asteroid is thought to have taken shapes billion of years ago and existed during a time when the solar system was very different than how it is today.

Its contents–soil samples–can offer scientists an unprecedented look into the early days of the solar system and perhaps even answer how life was “seeded” onto our planet and what planet formation was like in the early days of our star system.

In other words, Bennu is like an ancient time capsule, and the OSIRIS-REx mission was the tool used by scientists to open it, and now all it takes is to deliver the message back to Earth, where scientists will try their best to “read it.”

However, whether the TAG (Touch-and-go) event gathered enough of the message remains to be seen.

Missio specialists will now proceed and order the spacecraft to begin stowing the precious primordial cargo to begin its journey back to Earth in March 2021.

How the sampling event took place

It extended the shoulder, then the elbow, then the wrist of its 3.35-meter sampling arm, known as the Touch-and-Go Sample Acquisition Mechanism (TAGSAM), and pierced through Bennu as it descended approximately 805 meters to the surface.

After a four-hour descent, to an altitude of approximately 125 meters, the spacecraft executed the “Checkpoint” ignition, the first of two maneuvers to allow it to accurately target the sample collection site, known as “Nightingale,” NASA has revealed.

Some 10 minutes later, the spacecraft fired its thrusters, reaching the second “Matchpoint” phase; ignition slowed its descent and aligned it with the asteroid’s rotation at the time of contact.

It then continued a treacherous 11-minute journey past a rock the size of a two-story building, nicknamed “Mount Doom,” to land in the designated spot in a crater in Bennu’s northern hemisphere. The Nightingale site is one of the few relatively clear spots on this unexpectedly rock-covered space rock about the size of a small parking lot. There, the spacecraft had at its disposal fine material, which was easily collectible by the TAGSAM instrument.

“This was an incredible feat – and today we’ve advanced both science and engineering and our prospects for future missions to study these mysterious ancient storytellers of the solar system,” revealed Thomas Zurbuchen, associate administrator for NASA’s Science Mission Directorate.

While this is certainly a fascinating achievement for the US space agency in 2019, this was achieved by the Japanese Hayabusa2 mission.

The spacecraft surveyed asteroid Ryugu for more than a year. It then proceeded to “bomb” the asteroid with a projectile and landed on its surface to collect samples that the projectile had previously revealed. Hayabusa2 is expected to reach Earth in December 2020, delivering the samples it gathered to scientists on Earth.