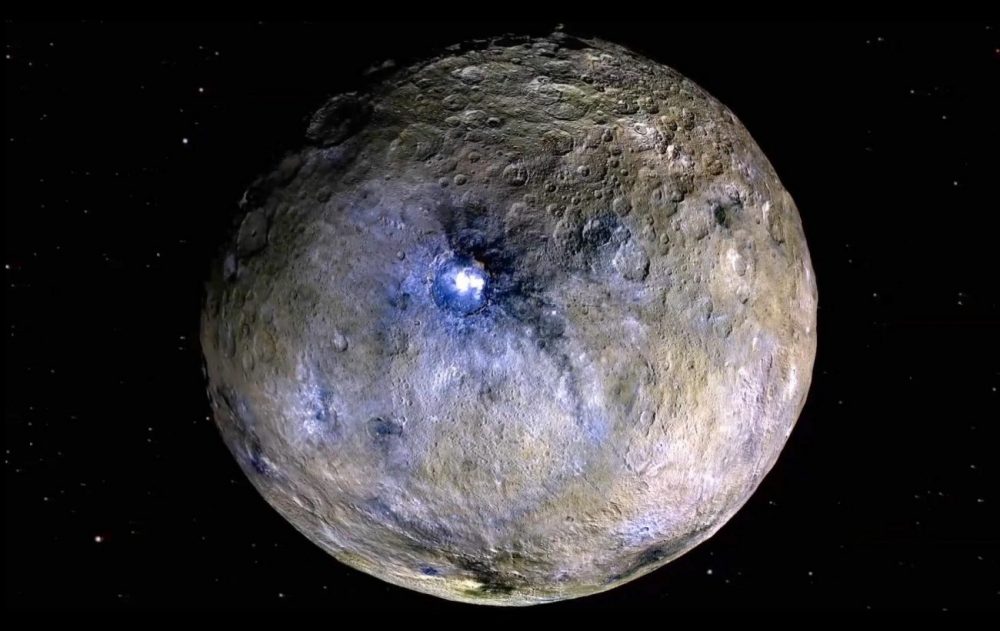 "Long believed to be a primitive body, Ceres is now an ocean world with deep brines at a regional and potentially global scale..."

Located between Mars and Jupiter’s orbit, this mysterious world has been the subject of many headlines in recent years – from strange lights to pyramidal mountains on its surface.

Data obtained from NASA’s Dawn spacecraft have revealed water in a liquid state under its surface.

Even though initial data pointed out that Ceres was a primitive body, the newly gathered data suggest Ceres is an oceanic world with deep regional brines. Possibly global scales, the researchers have revealed.

At around 600 miles in diameter, Ceres is less than three times as far from Earth as the Sun.

The data obtained by the Ceres flyby offers new clues about the potential habitability of planets and moons in our solar system and those in distant star systems.

The Dawn spacecraft obtained the data, which orbited the dwarf planet between 2015 and 2018, collecting scientific data until it ran out of fuel.

At the end of its operational life, the spacecraft has spent more than 11 years in space and explored Vesta and Ceres, two ancient time capsules from the solar system’s earliest chapters.

But before the spacecraft failed to communicate with Earth, it flew over Ceres’s surface, focusing on a region called Occator Crater, a 20-million-year-old characteristic of the Dwarf planet that was the source of a strange glow in early close-up images of the alien world.

Analysis of its data eventually showed that Ceres might have been geologically active in the recent past. However, it also adds further mysteries to a cosmic body already enshrouded in enigmas. The new data suggests that different conditions, including ice volcanoes, formed various bright parts of Ceres’ surface.

The results of the data are discussed in seven articles published today in Nature.

According to the authors of one of the studies, Carol Raymond of the California Institute of Technology, a large brine reservoir, an aqueous solution saturated with salt, is likely hidden under the Occator crater.

In another article, Maria Cristina De Sanctis from the Italian National Institute of Astrophysics and her colleagues point out the presence of hydrated sodium chloride in the central and larger bright area of the same crater.

These salts usually dry out quickly, suggesting that new brine is being pushed across the surface. This is strange.

According to the researchers, these results reveal that there is water in a liquid state below the surface of the dwarf planet and that Ceres is a kind of oceanic world, similar in many ways to the moons of planets Saturn and Jupiter,

The material found is essential in astrobiology since we know that these minerals are critical to the emergence of life.

Finally, the recent data also indicate that the crater’s mounds and hills would have formed after water flows – created by the original impact – froze.

Such behavior has only been seen before on Earth and Mars, but Ceres’ discovery suggests the phenomenon is far more widespread than initially thought.

The more we understand our solar system and its functions, the more able we will be to explore distant solar systems in search of Earth-like planets.

We have already found more than 4,466 (confirmed — August 17, 2021) exoplanets in the galaxy, and thousands more await confirmation. So it is very likely that just as there are Gas Giants and rocky planets, there are also dwarf planets in distant star systems.

If those in our solar system have minerals essential for the emergence of life, we can assume that if there are exo-dwarf-planets in distant star systems, they have similar materials.

Discovering and exploring the solar system’s planets, moons, and dwarf planets is of great importance if we are better at understanding the chances of life elsewhere in the cosmos.