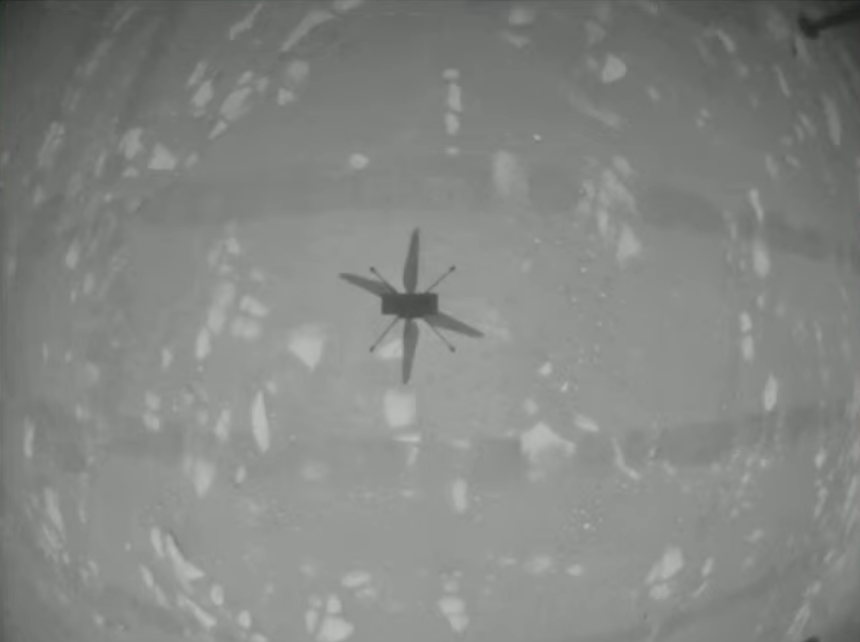 It's official - NASA's Ingenuity helicopter made its first successful flight on Mars!

The first extraterrestrial helicopter, Ingenuity, successfully completed the first-ever flight in the atmosphere of Mars. The helicopter was able to rise up to a height of three meters and held out there for several tens of seconds. The results of this incredible achievement were broadcasted on Youtube less than an hour ago.

Ingenuity was delivered to Mars together with NASA’s new Perseverance rover in February. Its test flight was originally scheduled for earlier in April but was postponed due to problems with the control system which led to the failure of the test for strong spinning of the propellers.

In the course of further work, engineers decided not to completely update the software of the drone but to adjust it. This led to the successful spinning of the propellers up to 2400 rpm on the second attempt. After this, NASA gave permission for the official test flight.

Late last night, NASA sent the official commands to the Ingenuity helicopter for the first-ever flight on Mars. The risks were great. The chances of failure – even greater. NASA gave no guarantees for success and despite this, Ingenuity succeeded!

Early on April 19, the helicopter made its first flight on Mars, taking off to a height of three meters, where it hovered for about 40 seconds total. Confirmation in the form of telemetry data and an image of the drone’s shadow taken by the navigation camera, as well as images from the rover, came to Earth 4 hours later.

Thus, the engineers confirmed that the helicopter is indeed capable of flying in the difficult atmosphere of the Red Planet, and the backup plan to update the flight control program has been canceled.

It is expected that for the rest of the month, the drone will conduct several more short flights, which will help to understand the features of the use of drones in the exploration of Mars or Titan.

Now, the helicopter will be given a few days of rest during which it will be recharged completely. There is a lot of data to be analyzed before the flight control team will send it to its next flight.

As scientists explained, Ingenuity will need at least four days before it can fly again. The plan is to schedule several short flights before experts attempt longer and more complicated routes. And once Ingenuity’s mission ends, Perseverance will finally begin its own scientific mission which is the search for ancient microbial life on Mars.

With this achievement, NASA once again proves to the world that the agency has no competition in space exploration.