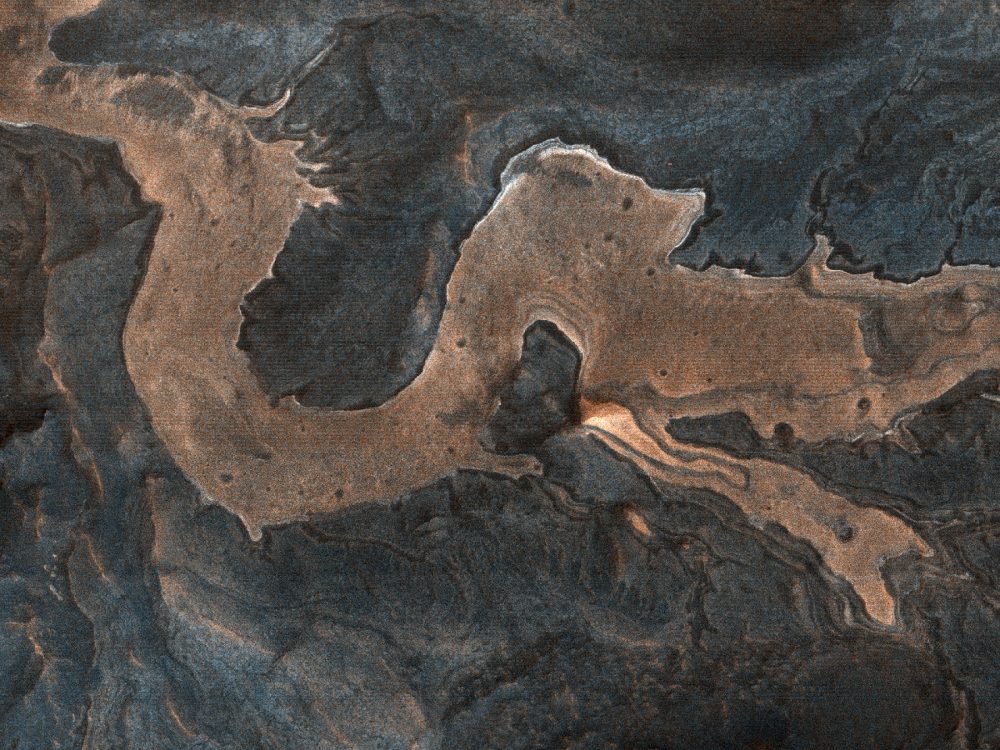 The image was taken by the MRO spacecraft and shows a curious region on Mars which looks like a massive dragon. What we are actually seeing here is the Melas Chasma region of Mars, once thought to have been the place of a massive Martian lake.

NASA has revealed a stunning image of the Martian surface snapped by its Mars Reconnaissance Orbiter. The spacecraft photographed a region on Mars that loos like a carved dragon on the red planet’s surface using its HiRISE camera.

Earth’s neighboring planet, Mars, continues to ignite our imagination thanks to a new batch of images beamed back from spacecraft orbiting Mars. The Mars Reconnoissance Orbiter used its HiRISE camera (University of Arizona) to take new pictures of the Martian surface, revealing striking new surface features on Mars. The MRO has been orbiting Mars and collecting unprecedented information about the planet since 2006. In addition to the science it does, the MRO has provided some of the most amazing images we’ve ever seen from Mars.

Writing on Twitter, MRO’s HiRISE account wrote: “We rotated this image of light-toned blocky material in southwestern Melas Chasma because from this perspective, it resembles a fabled Chinese dragon.”

The image of the curious surface feature was snapped by the spacecraft orbiting the red planet at an altitude of 160 miles above Mars.

Although the curious feature on the surface is quite exciting and resembles the shape of a “dragon,” it wasn’t the first time NASA spotted it. NASA first spotted the curious Martian dragon in 2007, but the dragon isn’t immediately obvious due to the rotation and angle of which the image was taken.

A Dragon (Canyon) on Mars

We rotated this image of light-toned blocky material in southwestern Melas Chasma because from this perspective, it resembles a fabled Chinese dragon.

The Martian dragon image is actually Mars’ Melas Chasma canyon, which appears in the reddish color in the image. According to planetologists, this oddly-shaped Martian canyon is probably cutting through an ancient lake bed on Mars.

As revealed by scientists from the University of Arizona in charge of the HiRISE instrument, “along the floor of Melas Chasma is an unusual blocky deposit composed of light-toned blocks in a darker matrix. The HiRISE image high resolution reveals layers only a few meters thick in some of the light-toned blocks. The blocks vary in size, but most fall between 100 to 500 meters in diameter.”

“Small valleys can be seen along the wall rock to the south. The wall rock is a mixture of two geologic units that differ mainly in their reflectance. The light-toned unit appears to be thinner and only exposed in localized spots.”

The Martian canyon cuts through layered deposits of what scientists believed to be sediments from an ancient lake that resulted from the runoff of the valley networks located to the west. The region is thought to have been covered in abundant water, evidence of which is the discovery of hydrated sulfates by the MRO. Scientific analysis suggests that the lake at Melas Chasma had fluctuating levels throughout the Martian year.

This is not the first time that NASA has spied unusual shapes on the Martian surface. Back in 2018, the spacecraft spotted what seemed to be an “Alien Pac-Man” on the surface of Mars.

Furthermore, the spacecraft also spotted a dune on Mars that looked eerily like the “Star Trek Starfleet insignia.”