Rapa Nui (commonly known as Easter Island) is home to some of the most enigmatic and fascinating ancient statues on the surface of the planet: the Moai.

These stone monoliths have guarded the landscape of the island for hundreds of years, bearing within them a message from the past.

Now, new research sheds light on the quarries where most of these massive statues were created and their ancestral function.

To understand more about the Moai, Anne Van Tilburg, the director of the Easter Island Statues Project who has been investigating the monoliths for thirty years, created a team with geoarchaeologist and soil specialist Sarah Sherwood. Van Tilburg, in cooperation with members of the local community, manages the first legally permitted archaeological excavations of Moai in Rano Raraku since 1955

These two experts set out on a long journey that lasted around five years during which they studied the sculptures and soil at Rano Rarakua volcanic crater and the origin of 95 percent of the more than 1,000 Moai Statues of the island, even though it makes up less than one percent of the total area of Easter Island.

However, the soil at Rano Raraku is more than just rock, according to researches, it is there where the richest land on the island is located, and the ancient inhabitants knew how to take advantage of it.

One of the Moai that was studied by the experts was Moaia Statue RR-0001-156, one of only three monoliths whose body was adorned in the ancient past with a dense set of petroglyphs which are believed to represent different tattoos.

The researchers, who have published the results in the Journal of Archaeological Science, conducted extensive tests of the quarry floor that showed evidence of foods such as bananas, taro, and sweet potatoes.

The analysis of these remains has shown that, in addition to serving as a quarry and place to carve statues, the Rano Raraku volcano was also a productive agricultural area that was used by the inhabitants of the island in the distant past.

Its southern and eastern interior slopes confirm the existence of crops dating back to a time between the fourteenth to the nineteenth centuries.

During that period, land use changed throughout the island and its inhabitants worked hard to increase the productivity of a soil that was less fertile.

As revealed in a statement, “Coupled with a fresh-water source in the quarry, it appears the practice of quarrying itself helped boost soil fertility and food production in the immediate surroundings, she said. The soils in the quarry are rich in clay created by the weathering of lapilli tuff (the local bedrock) as the workers quarried into deeper rock and sculpted the Moai.”

Further analysis suggests that the entire Easter Island community believed that the statues were capable of producing that agricultural fertility, so the ruling class ordered many of them to be erected.

In other words, the new study has discovered that the Moai statues were most likely carved at Rapa Nui to serve as fertility omens, although the direct quarrying of the statues boosted soil fertility and production.

“There were really high levels of things that I never would have thought would be there, such as calcium and phosphorous. The soil chemistry showed high levels of elements that are key to plant growth and essential for high yields. Everywhere else on the island the soil was being quickly worn out, eroding, being leeched of elements that feed plants, but in the quarry, with its constant new influx of small fragments of the bedrock generated by the quarrying process, there is a perfect feedback system of water, natural fertilizer, and nutrients,” Sherwood revealed in a statement.

The researchers further noted that the indigenous people at Easter Island were very intuitive about what kind of plants to grow, and knew that planting multiple crops in the same area would maintain soil fertility.

Nearly 400 Rapa Nui monoliths remain in their quarries and many of them remained buried in the soil. 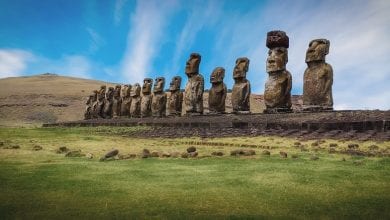 Chile Wants the U.K to Return a Mysterious Moai Statue, Stolen 150 Years Ago