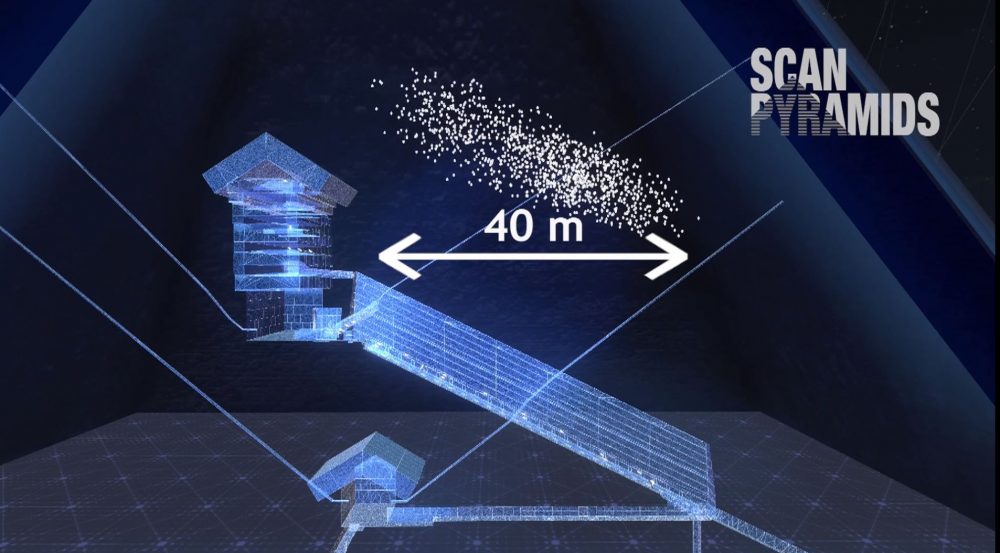 New scans revealed unprecedented details about the internal structure of the Great Pyramid of Giza. The so-called Big Void inside the Pyramid is now measured at 40 meters in length. Its contents remain a profound mystery.

Two years ago, a group of scientists from around the world used revolutionary technology to study the Great Pyramid of Giza in unprecedented detail. Experts were hoping to discover new details that may lead to our better understanding of how the pyramid was built and its purpose. The group of scientists scanned the pyramid looking for previously unknown chambers.

Although we have still not discovered what tools and technologies its ancient builders used, we have found that the pyramid is far more mysterious than we’ve ever imagined, hidden within its chambers and rooms that we thought never existed.

The Scan Pyramid project began in October of 2015. The project has seen experts from France, Japan, and Egypt participate in one of the largest studies of the pyramid ever attempted.

ScanPyramids, as the project is called, is a cross-disciplinary multinational archeological mission that uses state-of-the-art, non-destructive methods to scan various monuments for hidden cavities, chambers, or structures. This is achieved by using infra-red thermography and muons tomography.

Muon tomography essentially uses cosmic ray muons to produce three-dimensional images of volumes using information stored in the Coulomb scattering of the muons. Muons can penetrate much more deeply than x-rays, reason why experts use muon tomography to image through much thicker material than x-ray based tomography.

In other words, muon radiography will help detect differences in density inside the Pyramid providing experts with an internal image of the ancient monument.

Two years after the historic discovery made by ScanPyramids, researchers have now revealed a new video announcing that the large void within the Great Pyramid of Giza has been confirmed by a series of new scans taken from different points inside the pyramid, including scans made from the so-called relieving chambers that are located just above the so-called King’s Chamber.

Three different methods of muography were used, each independent of the other, and each was corroborated by in-depth computer simulations.

First, Nagoya University used plates containing a chemical film sensitive to muons. Another Japanese team from the KEK Institute transported and reassembled a very sophisticated device–piece by piece–inside the Queen’s Chamber; it was an electronic instrument that uses different technologies to detect the muons.

The third group of researchers from France installed equipment outside of the pyramid. They installed “telescopes” fitted with gas detectors and pointed them towards the pyramid.

In 2016, the devices from the ScanPyramids project revealed the existence of a cavity situated behind the chevrons of the north face, but without being able to determine its exact architectural shape.

In 2017, 2018, and 2019, new plates were placed on the descending corridors and the niches of the so-called Al-Mamun tunnel. All of the scans reconfirmed the existence of the cavity, located between 17 and 23 meters above ground level. This corridor is at least 5 meters long. It is horizontal and probably slopes upwards. Where it leads remains a mystery.

However, experts were able to rule out the theory of the corridor leading down, parallel to the descending corridor.

The new video also offers fresh data confirming the results first published in 2017. Perhaps the greatest discovery was the existence of the so-called void.

The Mysterious void is located just above the Grand Gallery, no more than 15 meters above it. Its minimum length has been reestimated thanks to the new scans to 40 meters in one single section. Its slope, however, remains debatable.

The new scans saw experts install new devices inside the Grand Gallery to observe the “Big Void” from several angles. Nagoya University placed several devices along the Grand Gallery. Other devices were installed in the King’s Chamber and the relieving chambers above it.

Unsurprisingly, the Big Void was again observed from these new measuring points, confirming and refining the results published in 2017.

The devices placed above the King’s Chamber inside the Pyramid revealed new clues about the structure. The researchers have revealed that their latest scans revealed no anomalies present between the arches, the relieving chamber, and the pyramid’s summit.

In 2018, the ScanPyramids scientists moved their devices into the unfinished underground chamber of the Great Pyramid to understand the parts of the pyramid located above the underground chamber. This new muon data capture is ongoing, and experts hope to reveal new clues about the pyramid.

The ScanPyramid project will continue, and new data will most likely be revealed later in 2021.