A British Astrologer claims that the French seer predicted the fire of Notre Dame in his book Les Prophéties.

Every now and then, when certain tragedies occur leaving mankind in shock and awe, people go ahead and look for clues and evidence from the past, that may have ‘warned us from’ certain events.

Michel de Nostredame, commonly referred to as Nostradamus was a French astrologer, physician and alleged reputed seer, who is perhaps best known for his book Les Prophéties, a collection of 942 poetic quatrains the French writer penned down. Published in 1555, Les Propheties eventually became a popular source for predictions of future events.

Eventually, and thanks to translations (or perhaps mistranslations of his work) Nostradamus attracted a large number of supporters, who, along with much of the popular press and countless smaller blogs, credit him with having accurately predicted many major world events.

The terrible Notre Dame Fire in Paris on Monday 15th April at 5.50pm local time was predicted by Nostradamus, the astrologer who also saw The Great Fire of London. Why is Julian Assange and Wikileaks woven into the story, though? –wrote Adams on her blog.

But is it really Nostradamus who foresaw the terrible fire of the Cathedral?

Or is it possible that sometimes people make use of certain events and try to forcibly connect them to verses written by Nostradamus, or other alleged seers?

Adams presents us with the following verse, claiming that it clearly predicts the fire.

But Adams also copies a tweet posted by French President Emmanuel Macron, saying that it has a lot to do with the fire, Nostradamus, and how everything was written in the stars.

Adams writes in her blog:

“This (the above) is the original prediction by Nostradamus in French and English, with astrology clues which point to Monday 15th, April 2019. What is astonishing is his use of the word ’emotions’ which is the exact word used on Twitter by French President Emmanuel Macron to describe France’s response.”

Why is it astonishing that the President used the word emotions? Well, because you need a ‘kicker work’ like that to make the prophecy work.

She goes on to explain that, “President Macron’s first name – Emmanuel – which refers to God – appears in the second line that Nostradamus wrote in the past.”

This is where everything is just forcibly woven.

Opportunely, the astrologer who interprets and attributes the writings by Nostradamus her way, draws parallels between the word “emotions” and the above statement posted on Twitter by the French president; “…Following a long century, evil will return France and Italy, what emotions will you undergo?”

Subsequently, Adams offers us an astrological chart for April 15, 2019, where she tries to fit the events, with the position of the planets and the zodiacal signs above Notre Dame on the day of the fire.

She believes that more than 500 years ago, Nostradamus left us astrological clues relating to the terrible events that nearly saw Notre-Dame disappear from history.

The above is when you tie Nostradamus’ writings with astrology. But you got to make a connection, right? If there is none, let’s make one, and tie up as much as you can, that’s at least what Adams did there.

Anyway, Jessica Adams doesn’t venture into what Nostradamus wrote, which by the way has nothing to do with the fire, as I’ll show in just a while, but she speaks of Italy, mentions Pedophilia-related scandals, and condemns Cardinals pf the Catholic Church.

So, what exactly does that have to do with a tragic event that nearly burned down a historic building? According to Adams, it has much to do, as she explains:

“The fire collapsed the cathedral just weeks after Cardinal Pell, Australia’s most senior Catholic, was found guilty of sex abuse charges against boys within the church. Evil did return. The ‘long century’ is really interesting here, because this is of course the Millennium and we are now at the year 2019.”

Beyond the speculations made by Adams, the mentioned quatrain written by Nostradamus does not correspond to the Notre Dame fire, but to another historical fact.

As you can read for yourself in the book “The Complete Prophecies of Nostradamus“, the quatrain used by Adams so forcibly actually refers to Louis XIV and the War of Spanish Succession in 1702.

On that date “there was a conjunction between Jupiter and Saturn in the constellation of Aries.”

The prophet predicted the agitated and extensive century that followed, which culminated in France invading Italy in 1802 and Napoleon proclaiming himself king of it in 1805.

“Louis XIV’s War of the Spanish Succession was underway in 1702, the year of conjunction between Jupiter and Saturn in Aries. Nostradamus foretells the long century of upheaval that ensued, culminating in France invading Italy in 1802, following which Napoleon saw himself declared President of the Italian Republic.”

Here’s the page of the book where we can clearly see what that specific quatrain refers to: 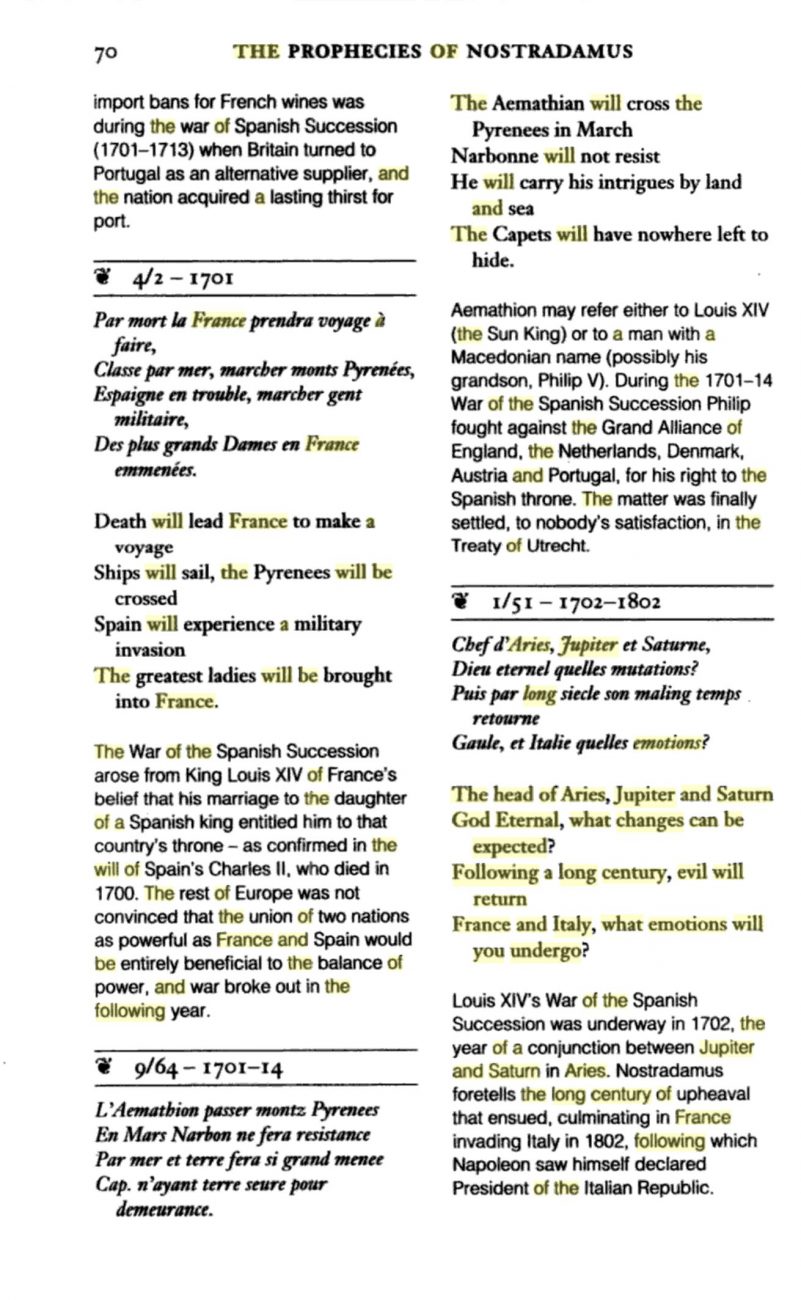 So, rest assured, Nostradamus did not predict Notre Dame burning down, and Jessica Adams’ blog post is nothing more than a blogger connecting and interpreting certain events as she wanted to. Had she not presented the ‘revelation’ as she did, there would be nothing there for her to grab on, and she would not have been able to throw out there a ‘fascinating,’ yet erroneous theory.