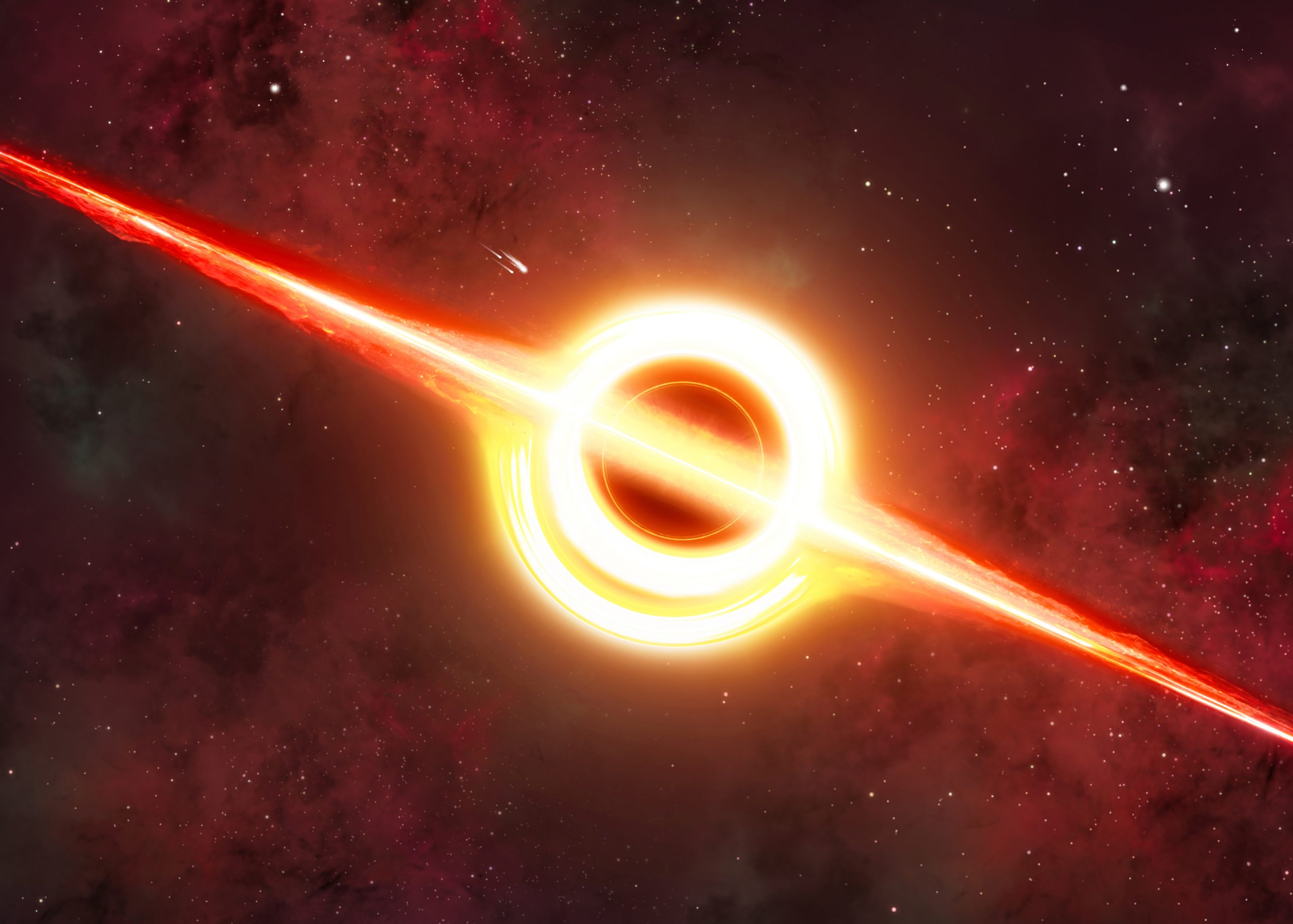 A far away galaxy has astronomers scratching their heads after they gathered odd data that could hint at a massive black hole merger about to take place.

In the most distant outreaches of space, in a galaxy far away from Earth, an impending cosmic collision might be about to occur. Based on weird data astronomers have gathered from a galaxy located a staggering billion light-years away, they suggest we could be about to witness a spectacular astronomical event.

An apparent binary black hole with a combined mass of about 200 million Suns might lurk at the center of SDSS J1430+2303, according to light changes from the galaxy’s center.

It is often the case that “imminent” can last for entire lifetimes in cosmic terms. Fortunately, and as revealed by Science Alert, astronomers predict that colossal black holes will merge within three years if the signal is indeed the result of them.

The best part of the entire story is that this may be our best shot yet to see two supermassive black holes collide.

But before we get all excited and start pointing our most sophisticated telescopes in that direction, we need to make sure that this is what is indeed happening at the center of the very-distant galaxy. This is why scientists will continue monitoring the odd-looking galaxy for its strange lighting changes in hopes of verifying that a behemoth black hole merger will indeed take place in J1429+2303.

And while this is certainly exciting news for astronomy, this would not be the first time we would witness such a spectacular cosmic event. In fact, the first detection of colliding black holes can be traced back to 2015.

Astronomy entered a bold new era after this cosmic merger. Gravitational waves sent by these massive events have led to many more detections since then. In nearly all of those mergers, there has been a binary pair of black holes with masses comparable to those of individual stars. The reason behind this is very good, say scientists.

Nevertheless, observing a merger of supermassive black holes would be pretty awesome. Did you know that astronomers estimate there are 40 billion billions black holes in the universe?

Anyhow, scientists expect a massive outburst of light across the spectrum, even without a detector capable of sensing low-frequency gravitational waves.

So much information packed into that outburst could help us understand how these events unfold. The formation of supermassive black holes isn’t entirely understood, but binary mergers may be one mechanism.

In the centers of these post-merger galaxies, supermassive black holes are observed orbiting each other in mutual, decaying orbits, not just colliding with pairs of galaxies or groups of galaxies. Based on oscillations in the light emitted by the galactic centers, an orbit can be inferred.

Thus, we are back at J1430+2303. An astronomical team led by Ning Jiang published a paper on arXiv earlier this year detailing some unusual behavior. The time between oscillations in the galactic nucleus became shorter and shorter over three years, from a year to only a month.

Although J1430+2303 appears to be a black hole binary, it’s unclear if it is. J1430+2303’s heart may be affected by something other than the variability in the galaxy’s heart since galaxies’ centers throw out signals that are difficult to interpret.

Astronomers used X-rays to investigate the matter. As part of a team led by Liming Dou at Guangzhou University in China, high-energy signatures that are expected to be observed in a close supermassive black hole binary on a decaying orbit have been identified using data from X-ray observatories over a period of 200 days.

Two instruments achieved a 99.96 percent confidence level to detect the X-ray emission of the galaxy as well as a type of emission associated with iron falling onto a black hole. Although the emission can be associated with binary supermassive black holes, the team could not measure the characteristics of a black hole binary. This would confirm the existence of a binary black hole.

There was no conclusive conclusion to be drawn from radio observations published in July. J1430+2303 still remains a mystery to us. At the galaxy’s center, something very strange appears to be occurring. Nonetheless, and based on the data we have gathered so far, scientists say that it is extremely likely that we are indeed about to witness a massive cosmic merge of two supermassive black holes.

If this is not the case, we are sure that scientists will get to the bottom of whatever is going on at the center of this distant galaxy. There is a paper available on the pre-print server arXiv that has been accepted for publication in Astronomy & Astrophysics.