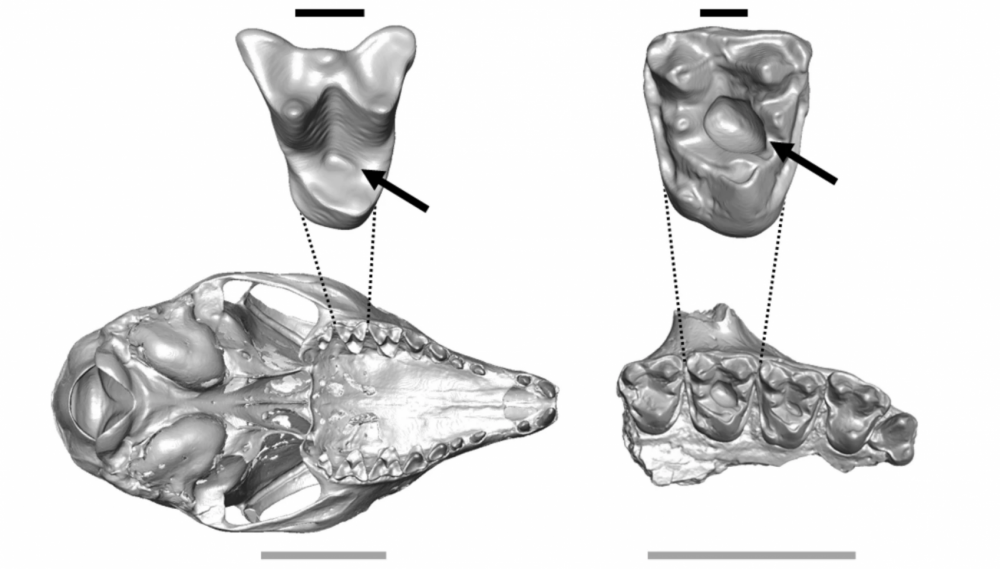 No one has previously estimated the prevalence of tooth decay in fossil species.

Canadian paleontologists have discovered the oldest cavities in mammals. After analyzing the remains of 1,030 primitive primates known as Microsyops latidens, from about 54 million years old, the researchers found that 7.48 percent of them suffered from dental problems. Moreover, the proportion of individuals with caries changed over time. So, in one of the periods, it reached 17.24 percent, which may indicate a temporary transition to a diet high in fruit.

Most people have experienced dental caries at least once in their lives. Our ancestors also suffered from it. Since the main factor that increases the risk of caries is considered to be the consumption of significant amounts of carbohydrates, specialists have the opportunity to reconstruct the diet of ancient people based on the condition of their teeth.

A similar technique is suitable for other mammalian species, including those long extinct. However, finds of non-human tooth fossils with signs of caries are quite rare and limited to a few extinct species of bears, artiodactyls, and primates, including early Homo. The earliest of them belong to the Middle Miocene.

Paleontologists Keegan R. Selig and Mary T. Silcox of the University of Toronto have decided to learn more about the prevalence of tooth decay in ancient mammals. They focused on the primitive primate Microsyops latidens. This small representative of the Plesiadapiformes group lived in western North America in the early Eocene, about 54 million years ago. It is believed to have weighed approximately 670 grams, was arboreal, and omnivorous, although it was based on fruits and leaves.

A large number of samples

Experts regularly find fragments of jaws and, less often, individual teeth of M. latidens in fossil sediments of the Bighorn River basin in the US state of Wyoming (however, little is known about the structure of the skeleton of this species). This gave Selig and Silcox the opportunity to study how often these primates suffered from tooth decay using a larger number of samples.

For their work, scientists have selected fossil samples belonging to 1,030 individuals of M. latidens. The sampling time range covered 544 thousand years and the oldest cavities were about 54 million years old.

Selig and Silcox carefully examined the fossil teeth for signs of cavities and analyzed them using microcomputer tomography. Scientists were interested in such signs as rounded lesions in enamel and dentin, areas with increased dentin density, as well as lesions in hard-to-reach places where the animal could not reach with the tongue.

In total, the researchers were able to identify dental cavities in 77 individuals, which is 7.48 percent of the sample. For comparison, among modern chimpanzees and bonobos (Pan), eight percent of individuals suffer from tooth decay, and among tamarins ( Saguinus ) – 9.3 percent. All M. latidens teeth affected by caries were premolar and molars; however, the authors admit that canines and incisors were poorly represented in the sample.

In addition, in all cases, caries developed on the chewing surface of the teeth and never between the teeth. In contrast to modern nonhuman primates, in which caries occurs mainly on worn-off or chipped areas of the teeth, M. latidens all cases of caries were primary, that is, they appeared on a healthy tooth surface.

The proportion of M. latidens with damaged teeth changes with the transition from one layer of deposits to another. In the layer located 505-524 meters relative to the bottom of the section, it reaches its maximum: 17.24 percent. According to the authors, during the time period that corresponds to this stratum, M. latidens included more fruits in their diet, which had a negative effect on their dental health.

Temporary shift in the diet

This idea is consistent with the results of another, as yet unpublished team study on this type of teeth. In the course of it, experts found in a layer located 525-544 meters relative to the bottom of the section, which corresponds to a later period of time, several samples of teeth of an atypical shape and suggested that they indicate a temporary shift in the diet towards higher consumption of fruits, probably caused by climatic conditions. The share of individuals suffering from caries in this layer was also above average and amounted to 12.5 percent.

Apparently, at first, primates switched to a diet with a higher content of fruits, which led to an increase in the incidence of caries (which is reflected in the layer located 505-524 meters from the bottom of the incision), and after some time the morphology of their teeth also changed ( this is noticeable from the finds in the layer located 525-544 meters relative to the bottom of the section). However, with the exception of this shift, which lasted ten to twenty thousand years, the overall diet of M. latidens remained relatively stable for millennia.

Selig and Silcox note that they were able not only to detect the oldest cavities in mammals but also for the first time in the history of paleontology to estimate the prevalence of this disease among a whole species. The researchers hope that the results of their work will help to learn more about the diet and lifestyle of long-extinct animals.