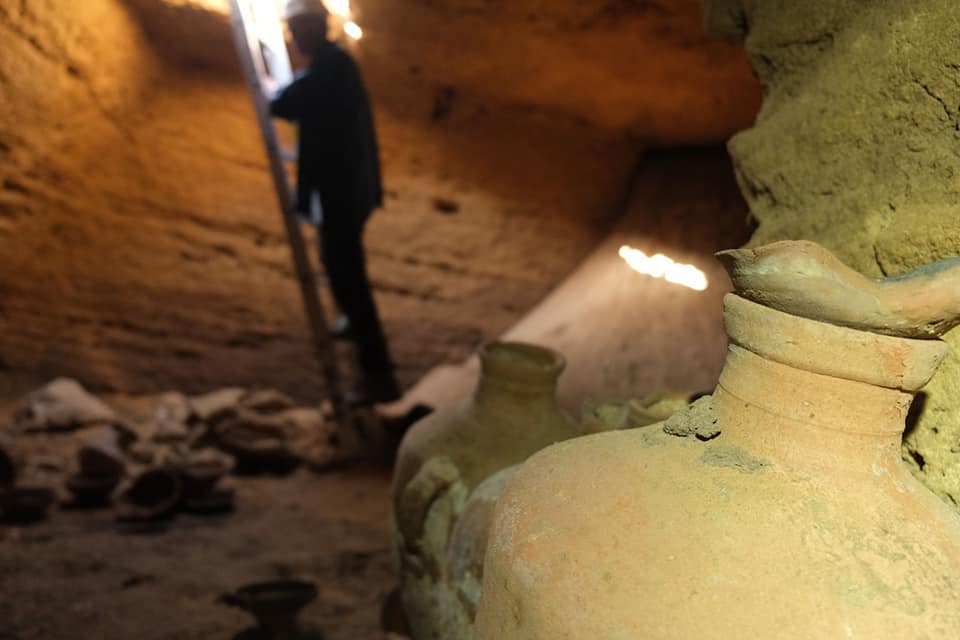 Researchers have made a "once-in-a-lifetime" discovery after encountering a cave filled with artifacts dating back to the reign of Ramesses the Great.

Ancient Egyptian artifacts and pottery found in a burial cave dating to the time of Pharaoh Rameses II have been described as a “once-in-a-lifetime discovery” by Israeli archaeologists. The discovery, as many others in the past, was made by chance. It was a mechanical digger working in Palmahim national park that struck the roof of the structure, exposing the spacious, square cave, which archaeologists explored with ladders.

To their surprise, they had quite a view; untouched artifacts dating back to the region of one of the most powerful Pharaohs in the history of ancient Egypt.

Posted on Facebook, an Israeli antiquities authority video shows archaeologists looking at pottery vessels in all shapes, sizes, and forms that date back to the reign of the ancient Egyptian king who died in 1213 BC, utterly astonished.

The burial offerings were found untouched about 3,300 years after they were buried. They accompanied the deceased on their journey to the afterlife. Two rectangular plots in the cave’s corner also contained a relatively intact skeleton.

Eli Yannai, a Bronze Age expert at the IAA, said the cave might provide a complete picture of Late Bronze Age funerary customs, specifically at the time of the rule of Ramesses the Great. Yannai described the discovery as an “extremely rare… once-in-a-lifetime discovery”, pointing out that the cave had remained sealed until recently.

Located in Canaan, a region that roughly encompasses modern-day Israel and the Palestinian territories, the findings date back almost two thousand years to the reign of Rameses II.

He built cities, temples, and monuments during the early part of his reign. His main base for his Syrian campaigns was the Nile Delta city of Pi-Ramesses, which he established as his new capital. During his expeditions into the Levant, he reasserted Egyptian control over the Canaan and Phoenician regions.

“Lively trading activity was taking place along the coast,” Yannai said in a statement issued by the IAA based on the provenance of the pottery vessels: Cyprus, Lebanon, northern Syria, Gaza, and Jaffa.

An archaeologist with the Israeli Archaeological Association, David Gelman, speculated on the identity of the skeletons in the cave, located on a popular beach in central Israel.

It seems likely that these people were warriors or maybe they were guards on ships when they were buried, because of the fact that their weapons were found with them,” he said. Gelman said the cave, regardless of its inhabitants, was an incredible find.

As rare as burial caves are, finding an untouched one that dates back 3,300 years is rare as well,” he said. There are intact pottery vessels, intact weapons, intact bronze vessels, and intact burials just as they were originally – like something out of an Indiana Jones movie.”

As a result, the cave was re-sealed and is under guard while an excavation plan is being developed, according to the IAA. There were “a few items” looted from it during the short period from its discovery to its closure, the statement noted.