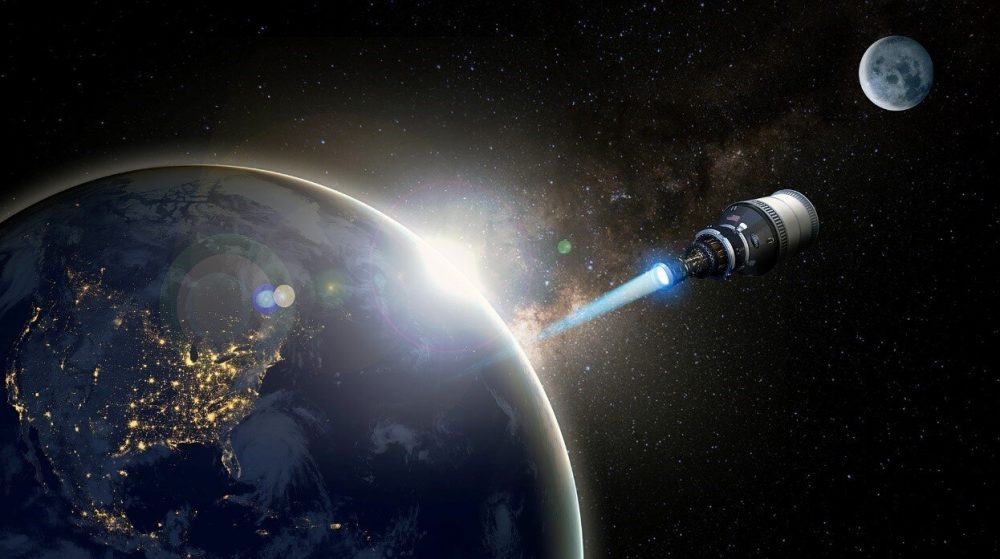 In 2020, the Defense Advanced Research Projects Agency (DARPA) launched the DRACO program. Its goal is to develop a thermal nuclear engine that could be used for flights in space.

In the 60s and 70s of the last century, the United States and the Soviet Union were desperate to create a nuclear engine. And they even developed several prototypes. The most famous of these is the joint program of NASA and the US Atomic Energy Commission – NERVA, and the Soviet program to develop nuclear engine RD-0410.

However, none of the devices created have ever been used for space flights. Why? There are several reasons for this which we will discuss in the following lines. What’s important is that the Pentagon is now pushing forward to the creation of such a system for space travel.

Everything you need to know about nuclear engines

First, let’s take a look at how a nuclear-thermal engine works. The thrust that such a device develops comes from using a nuclear fission reactor to heat low molecular weight fuel. It is proposed to use hydrogen in this capacity. With rapid heating, hydrogen atoms receive a colossal amount of kinetic energy and are ejected at a very high speed, creating jet thrust. It’s simple.

The use of a propulsion system of this type offers tremendous advantages over conventional rocket engines. Since it demonstrates high efficiency. The nuclear engine is capable of producing specific impulses (Isp) above 800 seconds. By comparison, conventional chemical thrust typically provides an Isp of 300 to 450 seconds. The difference is obvious.

As for the disadvantages, the most important of them is the emission of radioactive material through the nozzle. Although it ceases to be a problem if the engine is started in space. You also need to consider the generated radiation, which can affect both electronics and living things. You can also note the poor ratio of the developed thrust to the own weight of the product. And the high price to pay for a nuclear engine.

From the pros, you can add that an unactivated nuclear engine is not radioactive.

But perhaps the main drawback of nuclear heat engines is that their efficiency, while high, is not particularly impressive. Especially when compared to other promising propulsion systems. (For example, the ion propulsion system can easily deliver 2000 to 5000 Isp seconds. Although the thrust provided by these types of engines is usually meager).

This fact became the reason that space agencies and organizations sympathetic to them considered that difficulties would definitely arise with the introduction of such an engine. And its disadvantages don’t outweigh its advantages.

In 2020, the Defense Advanced Research Projects Agency (DARPA) launched the DRACO program. Its goal is to develop a thermal nuclear engine that could be used for flights in space.

On April 9, 2021, DARPA awarded a $22 million contract with General Atomics to develop a compact nuclear reactor that can be used in a nuclear engine.

The specific gravity of this device should be similar to that of a conventional chemical engine. But Isp should be two to five times higher.

General Atomics has a year and a half to design a suitable reactor for the first phase program. The reactor should be of the HALEU type ( High-Assay Low-Enriched Uranium ), that is, it will contain 20% uranium-235.

Presumably, a solid core will be used in the final design. Same as the one used in 1960s programs. But not a liquid or gas core. Yes, using them can, in principle, significantly improve engine efficiency. However, it will greatly complicate the design.

DARPA later announced contracts for the development of the DRACO program ship. According to the information released, Lockheed Martin received $ 2.9 million and Blue Origin received $ 2.5 million.

Both companies will start developing their concept ships after General Atomics completes the design of the reactor.

However, it is quite obvious that this money is not enough to create a spacecraft on which a thermal nuclear engine will be installed. Most likely, we are talking only about the preliminary design stage.

As discussed at the beginning of this article, nuclear engines are not dangerous when launched into orbit in a shutdown state. But after launch, everything changes. And you need to be very careful not to get them into the Earth’s atmosphere.

The DRACO program is not the only US initiative to revive nuclear heat engines. NASA also has its own program. Its goal is also to develop a nuclear engine. And NASA even signed a $9.4 million contract with BWX Technologies to determine the overall design parameters for the new nuclear engine’s reactor.