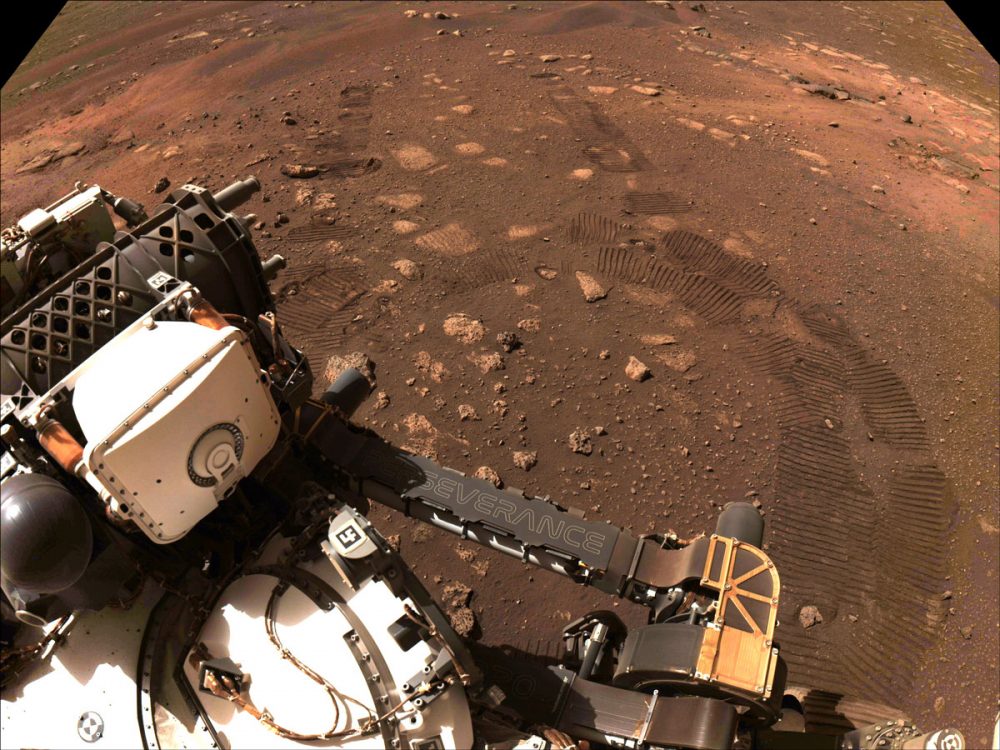 Perseverance will soon begin traveling towards its main scientific target.

A couple of days ago on the 14th day after the successful landing on Mars, Perseverance made its first drive on the surface!

Space enthusiasts learned about the important achievement immediately when NASA uploaded several raw images on the NASA website. I remind readers that the US space agency is one of the few in the world where raw images from interplanetary missions are uploaded immediately after their arrival on Earth. This way we can learn what is happening even before a special press conference is organized.

Let me remind you that NASA’s Perseverance rover, launched on July 30, 2020, landed on the surface of Mars on February 18 in the vicinity of the Jezero crater. All systems and equipment will be tested in the coming months. In the future, the rover will have to collect samples of Martian soil.

In addition, NASA also sent a helicopter to Mars called Ingenuity. In a few weeks’ time, it will attempt its first flight which will allow us to understand the potential of rotorcraft outside of Earth.

The first trip of the six-wheeled rover lasted 33 minutes. During this time, the rover drove six and a half meters: first, it covered about four meters, then turned 150 degrees to the left and drove back another two and a half meters.

Before driving, the rover checked the steering and wiggled the wheels. Footage of the first movements of the rover was posted on the official Twitter of the mission.

A quick test of my steering, and things are looking good as I get ready to roll. My team and I are keen to get moving. One step at a time. pic.twitter.com/XSYfT158AQ

As noted by NASA engineer Anais Zarifian, the rover’s first trip went “incredibly well.” According to her, the rover showed itself better than during the tests on Earth. She called the first trip “a huge milestone” for the Perseverance mission.

Over the next several weeks, the rover will make small trips in search of a suitable place to launch the helicopter and return to its original parking area.

In the future, when the preparatory work is completed and “Perseverance” begins to perform scientific tasks, it will regularly drive more than 200 meters per day. In the next two years, he will have to travel about 15 kilometers to several rock formations in search of evidence of life on the planet.

"Our first drive went incredibly well. […] You can see the wheel tracks that we left on Mars. I don't think I've ever been happier to see wheel tracks, and I've seen a lot of them." — @NASAJPL's Anais Zarifian describes a milestone for @NASAPersevere. pic.twitter.com/gewrGoLsRa

NASA has been releasing new batches of images from Mars every day since Perseverance landed last month. No previous mission has been as interactive nor as publicly available as Perseverance and there are already nearly 8000 images in less than three weeks.

A few days ago, we received a magnificent panorama mosaic, composed of 79 individual images taken by Perseverance’s Mastcam. The shots were taken four days after the landing and show us a complete 360-degree view of the surroundings as seen from the landing spot.

This is a nearly-raw version of the images, only calibrated to a certain degree to show us a near-accurate color composition to what we would see if we were on Mars.

You can see the entire Perseverance image gallery on the official website of the mission HERE and the entire 360-degree panorama image HERE.

Now that Perseverance has made its first drive on the surface of Mars, we can soon expect to see images from its explorations.