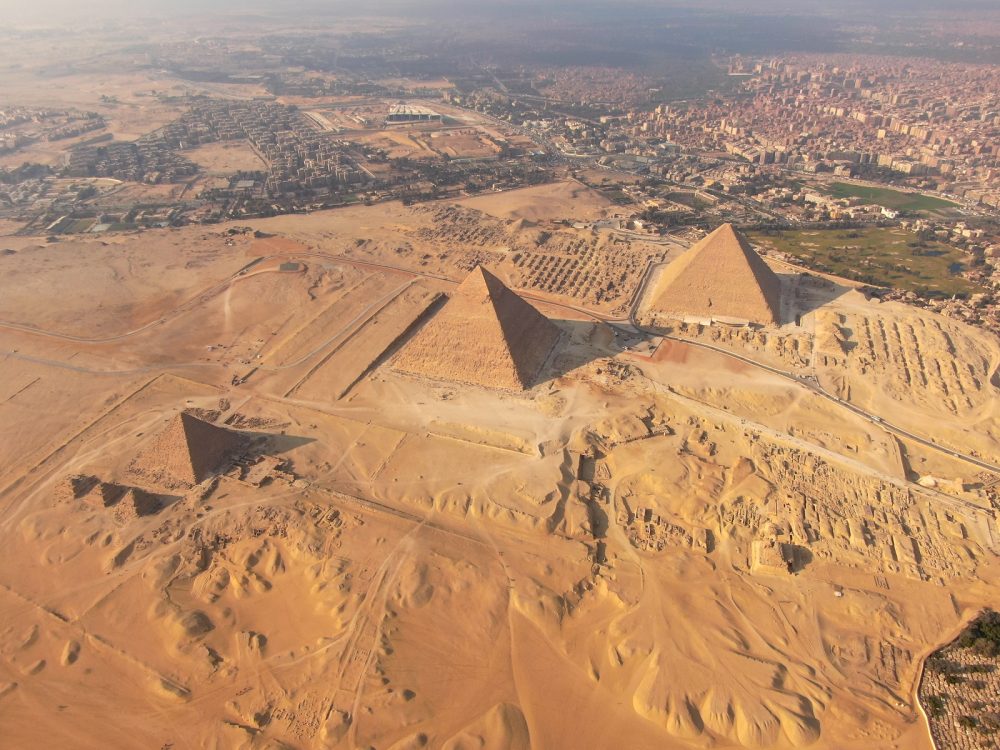 Why did ancient cultures build so many pyramids in ancient times?

For thousands of years, ancient civilizations built monuments we would come to call pyramids in modern times. Since time immemorial has mankind been left awestruck by these majestic ancient buildings.

Their exact purpose, however, remains disputed and conflicting evidence exists about the purpose of these massive, ancient structures.

In Egypt, eight provincial pyramids were built for reasons that remain unclear to scholars:

These pyramids came not long after the Step pyramid was built.

At least in Egypt, Djoser’s pyramid was the first. Never before Djoser did any ruler even come up with the idea of building a pyramid, although at the time of the construction of the Step Pyramid, pyramids were already being built in other parts of the world like the Americas.

In Egypt, Djoser innovated. And his innovation is greatly due to the ideas that were brought forth by his royal vizier and architect Imhotep. Had Djoser not chosen Imhotep as his architect and commissioned him with building a monument at Saqqara, we can’t possibly imagine what the monument would have looked like.

Thankfully, Imhotep had refreshing ideas that were recognized by Djoser.

But although the Step Pyramid at Saqqara was refreshingly innovative, it draws precedents from antiquity and classic ancient Egyptian culture.

The Kings of Egypt who ruled Egypt before Djoser would build their royal forms in the form of mastabas made of mudbrick and other easily accessible materials. Although the ancient Egyptians had used stone in their buildings before Imhotep, the Step Pyramid was the first great free-standing monument that was built of stone, and a superstructure built entirely of stone blocks.

The mastabas of predynastic Egypt are believed to have transferred many architectural elements to the later pyramid of Djoser. In fact, Imhotep started of Djoser’s pyramid as a square mastaba.

Mastabas were constructed in ancient Egypt right until the beginning of the Third Dynasty when Egypt changed forever. With the arrival of King Djoser, many new developments came to Egypt, and architectural changes were the most notorious.

Despite the fact that King Djoser followed tradition and built a massive mastaba of mud-brick at the royal necropolis of Abydos, he turned to Saqqara for reasons that remain unclear and began the building project that would forever warp ancient Egyptian history.

Many scholars have argued that the Step Pyramid advanced from an initial square mastaba to the final six-step pyramid we see today. As perceived by Jean-Phillippe Lauer, the main excavator of the pyramid complex, there were six stages during which the Step Pyramid was completed: M1, M2, M3, P1, P1′, and P2. If this theory is accurate, it means that the royal architect transformed the structure on the go, adding and changing elements as time passed by. It could also mean that inadvertently, he built a pyramid reaching for the sky.

As the builders of the Step Pyramid began transforming the square mastaba into the Step Pyramid, they built a crude core of irregular stones, and a fine limestone casing as well as a layer of packing in between. This building method is similar to the one used in the constructions of ancient mastabas, but this time there was one disreputable difference: the architects decided to quit horizontal beds and began constructing in accretions that leaned inwards.

It is usually acknowledged that Djoser’s Step pyramid represents crystal clear mastaba elements that were warped and transformed by Imhotep, eventually resulting in a structure that had never before been built in ancient Egypt. This could easily mean that the initial plan of Imhotep was not building the monument we see today, but a kind of elevated mastaba.

Of course, this can’t be confirmed or even denied as there isn’t one single ancient text that speaks of how, why and exactly when the ancient Step pyramid of Djoser was built. Since there are no plans, projections or blueprints of the Step Pyramid, we don’t really know that Imhotep and the builders envisioned the structure to look like, before laying down its initial foundations.

What we do know, however, based on the various archeological excavations throughout Egypt is that the Pharaohs that succeeded Djoser had a really tough time mimicking Djoser’s pyramid complex. In fact, it wasn’t until Sneferu that a worthy pyramid was built in Egypt.

King Sneferu was the founding pharaoh of the Fourth Dynasty of Egypt during the Old Kingdom.  The most well-known monuments from Sneferu’s reign are the three pyramids built in Dahshur: the Bent Pyramid, the Red Pyramid and Meidum (the Meidum pyramid).

Under Sneferu’s reign, pyramid building methods were once again revolutionized, and his major pyramids would eventually lay down the necessary foundations for the construction of the Great Pyramid of Giza.

Sneferu is actually the greatest Pyramid builder in the history of ancient Egypt. Although he did not build the largest pyramid of ancient Egypt, he is responsible for building the first smooth-sided pyramid. Sneferu also perfected the angle at which a pyramid would be built.

The first pyramid of Sneferu is the ruined structure standing today at Meidum. This monument, which was initially built as a step pyramid, was ancient Egypt’s first attempt at building a smooth-sided pyramid. This construction project failed but would provide important clues for the construction of Snefer’s Bent Pyramid.

The Bent Pyramid at Dahshur attests to a massive architectural innovation. The pyramid’s angle of inclination was changed from its initial 55 degrees to the 43-degree inclination we clearly see today. It is not clear whether or not the Bent pyramid was initially designed like this, but it is very likely that the structure was modified during construction due to unstable accretion layers.

The Bent Pyramid would then provide the necessary details for the construction of Egypt’s first successful smooth-sided pyramid, the Red Pyramid at Dahshur. This massive structure was built with a total volume of 1,694,000 cubic meters (59,823,045 cu ft). It was the largest and tales pyramid built in Egypt until the completion of the Great Pyramid of Giza.

The Red Pyramid is ancient Egypt’s third-largest pyramid, surpassed only by Khufu’s and Khafre’s Pyramid. Most Egyptologists argue that the design of the Red Pyramid is a direct outcome of the engineering problems experienced during the construction process of both the Bent pyramid and the one at Meidum.

Whatever the case, the pyramid that succeeded Sneferu’s Red Pyramid was the greatest of them all. The Great Pyramid of Giza marked the zenith of ancient Egyptian Pyramids, establishing itself as the tallest structure on the planet, a title it would hold for around 3,800 years.

Ancient Egyptian pyramids are unique, not only because of their design elements, but because of the materials used in their construction, and the precision by which they were built.

The First Pyramid and its origin. It is generally agreed that the first pyramid of Egypt is its most fascinating one. It may not be the greatest in terms of volume, or tallest one built, but it marks a clear change in ancient Egyptian architecture. In terms of size, the Step pyramid may not be the biggest, but it features an underground complex that was never again built in the thousands of years of ancient Egyptian pyramid building. The Step pyramid is also unique because it is believed to have started off as a square mastaba which was eventually evolved into a kind of stepped mastaba, giving it its step-pyramid shape. The core of the pyramid was built with a crude core of rough stones that were eventually cased with fine limestone with packing in between.

Short legacy of step pyramids. Although the Step Pyramid of Djoser was a revolutionary, first of its kind, future pyramid building in ancient Egypt went through a rough face. After Djoser’s reign, a number of Pharaohs attempted to replicate the building constructed by Djoser but with little luck.

It wasn’t until Sneferu that Egypt saw the birth of a new kind of pyramid. Sneferu’s pyramids alone contain more than 3.5 million cu. meters of stone. All the other pyramids of ancient Egyptians kings combined contain only 41 percent of the total mass of the pyramids of Sneferu, his son Khufu and his grandson Khafre.

A Pyramid unlike any other. After Sneferu, Khufu came to the throne of ancient Egypt. Just as his father, Khufu revolutionized ancient Egyptian pyramids in ways that may have been as unimaginable to previous generations. A young Khufu would go on to commission a pyramid that would turn out to be the largest ancient Egypt has ever seen, and the most precise structure on Earth.

As noted by Lehner, the base of the Great Pyramid of Giza is level to within just 2.1 centimeters; the average deviation of the sides from the cardinal direction is 3’6” of arc; the greatest difference in the length of the sides of the Great Pyramid is 4.4 centimeters. The exact purpose behind such a striking precision remains largely unexplained. Khufu would also go to build the only eight-sided pyramid of ancient Egypt. Pyramids that followed weren’t nearly as sophisticated as the Great Pyramid. During the First Intermediate Period pyramid building in Egypt nearly ceased. During the Eighteenth Dynasty, ancient Egypt saw the construction of the last royal Pyramid.