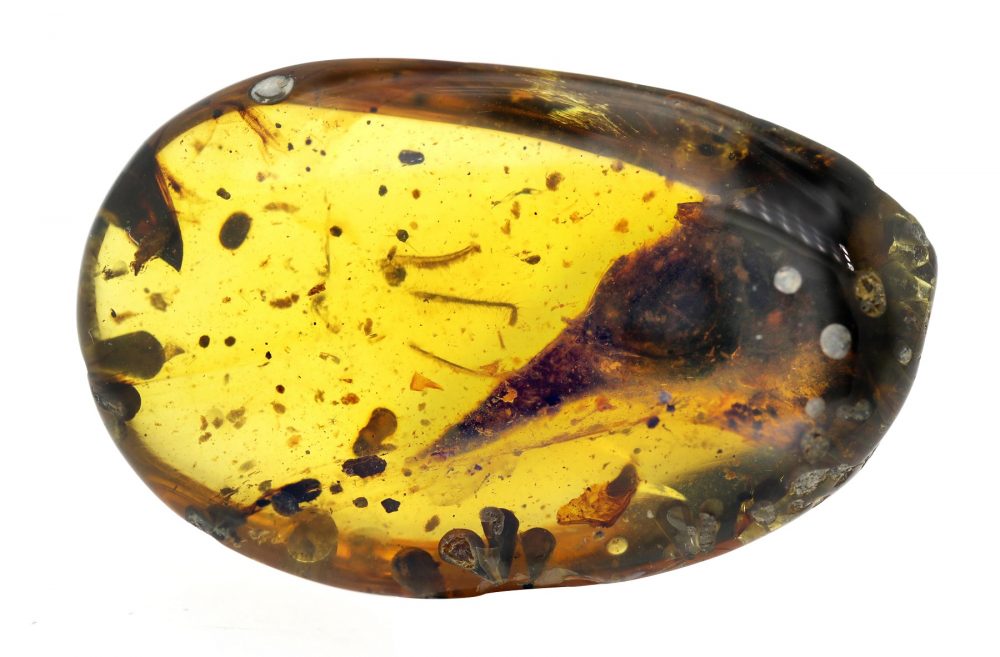 Scientists say that it could be the smallest Mesozoic dinosaur recorded to date.

It’s not every day that you get to find a dinosaur’s fossil, right? While these chances are slim, even less are the chances that you will find one preserved in Ambar.

So, what are the odds of actually coming across a 100 million-year-old dinosaur, one that’s preserved in amber?

As it turns out, someone actually found it.

The well-preserved dino was found in northern Myanmar and is one of the smallest dinosaur species ever discovered.

Such is its state of preservation that it has over a hundred sharp teeth that are clearly distinguishable, as well as its unique reptilian eyes.

Some 100 million years ago, a small dinosaur that preceded modern birds became trapped in a tree’s resin which eventually hardened and turned into amber, preserving the specimen for history.

Its skull measures just 7.1mm in length, indicating that it was similar to the bee hummingbird, the smallest living bird in the world, weighing just 2 grams.

According to the researchers, this new species could be the smallest Mesozoic dinosaur recorded to date. It has been called Oculudentavis khaungraae, a name that reflects its striking and unique characteristics.

The skull shows a unique fusion pattern between different bone elements and is dominated by a large lizard-like eye socket.

The eye socket has a narrow opening and only lets in a small amount of light, indicating that the dinosaur had daytime habits.

The researchers argue that despite its diminutive size, Oculudentavis wasn’t shy at all, as evidenced by its large number of sharp teeth, which suggest that it was quite a predator.

Unlike modern birds of similar size, it probably fed on small arthropods or invertebrates, which have no teeth and feed on nectar for sustenance.

A bird with predator’s teeth

With a weight estimated to be just 2 grams (0.07 ounces), which is similar to the weight of two-dollar bills, the predator bird-like dinosaur was fitted with predator-like sharp teeth.

In fact, analysis of the species suggests that the ancient dinosaur had more teeth than any other Mesozoic [dinosaur-age] bird that we know of.

Surprisingly, the researchers also found that the dinosaur even had teeth in the back of its jaw, just beneath its eye, a characteristic that tells experts that the creature could open its mouth really wide.

Despite this, it likely fed off relatively small meals because it was so tiny.

Although this is one of the best-preserved species of its kind, scientists have revealed that bivalves bore into the amber damaging parts of the skull. Luckily, most of the creature’s skulls remain well preserved, which has allowed scientists to study its unique anatomy with the help of specialized scans.

One of the most striking features of the species are its teeth and their position.

As explained by Jingmai O’Connor, a senior professor of vertebrate paleontology at the Chinese Academy of Sciences, “the teeth are fused into the skull, which is highly unusual for a dinosaur, including birds.”

Further characteristics revealed by experts suggest that, given the inner diameter of the eye socket, the creature had small pupils, which suggest it hunted during the day.

However, since its eyes were located on the sides of the skull, it indicates the creature had minimal binocular vision, which may have hampered its ability to hunt.

You can’t hunt what you can’t see, right?

The discovery, which has already been described by experts as “truly astonishing,” offers important clues about the evolution of birds. This specific specimen provides a fascinating look into the miniaturization of early species that lived on Earth around one hundred million years ago.

The study detailing the unique characteristics of the bird-like dinosaur are published in Nature.