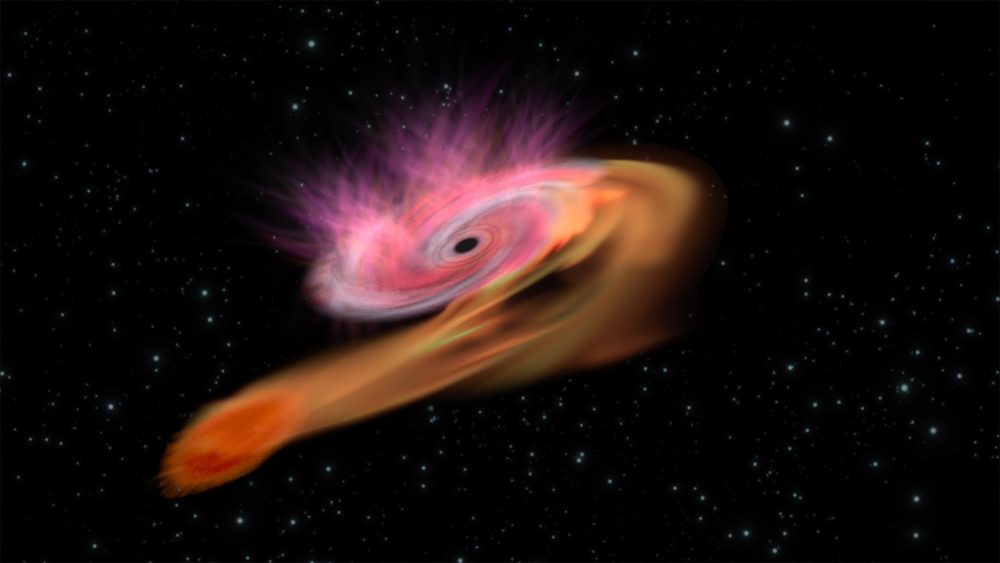 This phenomenon occurs when a star flies close enough to a black hole for tidal forces to destroy it.

The Spektr-RG Space Observatory has helped astronomers see the early stages of the tidal disruption of a star by a supermassive black hole in a distant galaxy. The light from the source traveled to the Earth for 2.5 billion years and further observations will help determine the mass of the supermassive black hole and the rate of accretion of matter onto it. The discovery was reported on the website of the Space Research Institute of the Russian Academy of Sciences.

What is a tidal disruption and how did astronomers capture this phenomenon?

1. The events of the tidal disruption of stars are of great interest to astrophysicists since they make it possible to understand the mechanisms of accretion of matter onto black holes and the abundance of compact objects of this type in galaxies.

2. They occur when a star flies close enough to a black hole for tidal forces to destroy it, causing some of the star’s material to be thrown away and some to form an accretion disk around the black hole.

3. At the same time, scientists are trying to observe the earliest stages of such events, since this allows the creation of a more complete picture of what is happening.

5. Its spectrum can be described by a black body model with a temperature of 50 electron volts and a radiation flux of 3.8 × 10 -13 erg per second per square centimeter.

6. Thanks to subsequent observations using the Keck Observatory’s optical telescope, it was possible to determine that scientists recorded an event of tidal disruption of a star by a supermassive black hole, which occurred in a galaxy with a redshift of z = 0.199. This means that the light from the source took 2.5 billion years to reach the Earth.

7. In addition, the observations of the ground-based ATLAS system showed that the activity of the source in the optical range began 1-2 weeks after the registration of X-rays, which means that scientists are seeing the early stages of the destruction of the star.

8. According to eROSITA and the Swift Space Ultraviolet Telescope, it turned out that an accretion disk had formed around the black hole, with a luminosity close to Eddington’s luminosity (at which the force of gravitational attraction is balanced by the radiation pressure).

9. Further multiwavelength observations of SRGe J131014.2 + 444315 are expected to measure the mass of the supermassive black hole and the accretion rate.

10. Spectr-RG has been conducting scientific observations since October 2019 and is creating detailed maps of the sky in the soft and hard X-ray ranges with record sensitivity. It is equipped with two telescopes: the Russian wide-angle ART-XC and the German eROSITA, which are installed on the Russian Navigator platform. According to the plan, “Spectr-RG” should work for about 6.5 years in space.

• Press Center IKI RAS. (n.d.). SRG / eROSITA saw the beginning of the tidal destruction of a star by a supermassive black hole. 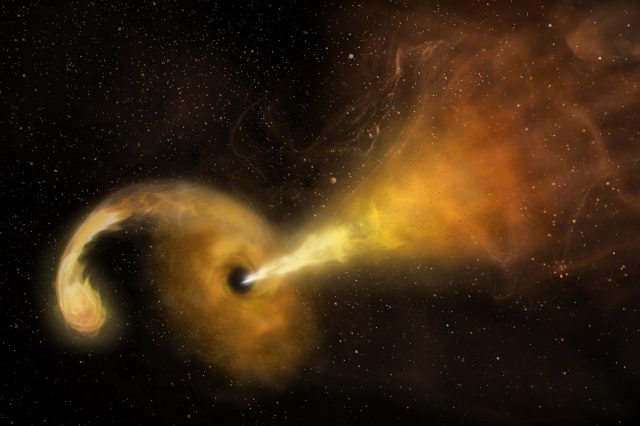