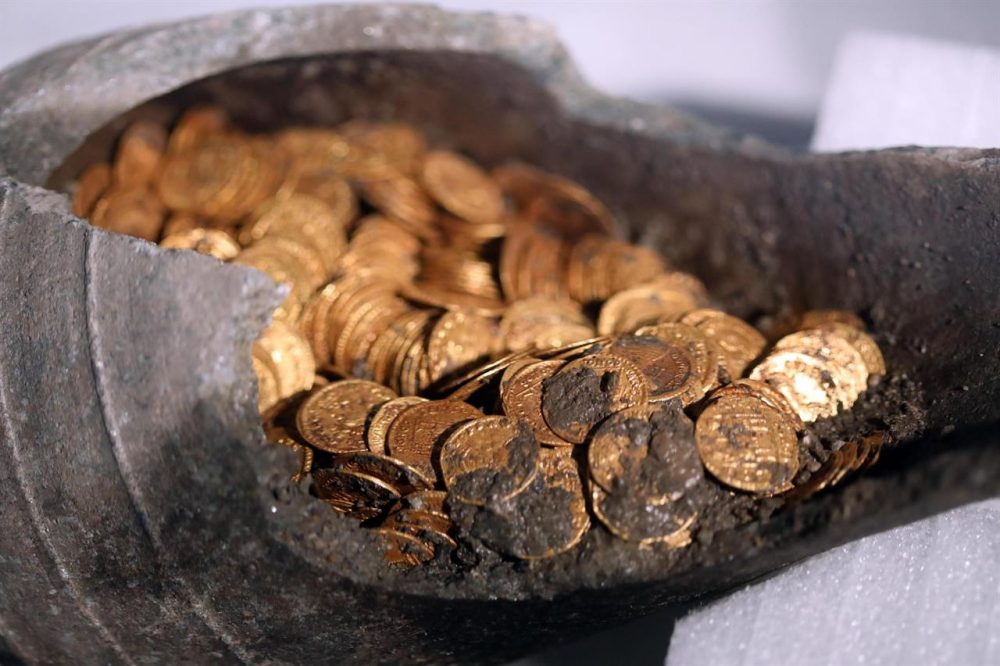 An ancient Roman coin treasure was unearthed by complete chance during the renovations of an old Italian theatre.

How does an ancient Roman golden coin treasure remain hidden for centuries never to be found even during the construction of an Italian theatre 150 years ago? Only in 2018, archaeologists hit the absolute jackpot when they stumbled upon an amphora full of pure gold coins during renovations of the basement area of this exact theatre. How significant exactly is this find?

The Cressoni Theatre in Como, Italy, was constructed in the 1870s and served as a theater and later a cinema. However, it has permanently closed in 1997 and had stood in peace for about two decades until it was purchased by a private company. The original plan for it was to be renovated and transformed into luxury residences until an unexpected find put the work on hold in 2018.

An ancient Roman amphora, now dated to approximately 474 AD, was unearthed during the renovation process. Experts were not expecting the soapstone jar to be filled with coins. After all, this type of jugs with handles was normally used to store wine and olive oil.

The Roman coins were in pristine condition as they were well-protected in the sealed amphora which is another reason why this find is so significant. In most cases, ancient coins come in terrible condition that requires countless hours of laboratory work.

Currently, they are being analyzed and restored in Milan, and not much information has been released as of yet. Early opinions on the discovery suggested that the coins could be worth millions of dollars.

Provenance and significance of the coins

Experts have mixed opinions on the provenance of the coins. Based on the engravings, they at least know the approximate period but why their owner hid them in the jar, remains an absolute mystery.

When they were discovered, archaeologists noted that the Roman coins were stacked in a striking resemblance to the method used in banks nowadays. This hinted to the theory that they may not have been privately owned. After all, banks existed in the Roman Empire in some way or another.

Another version suggests that they were purposefully stacked in rolls and sealed in the amphora. If we accept dating before 500 AD, it could mean that the owner may have needed to protect his treasures from invaders. After all, the region around Como was highly affected by the invasions of the Goths and Vandals which played a vital role in the collapse of the Roman Empire. There are many reasons to believe that the owner buried the Roman coins to protect them but never came back. And just like that, it took more than 1500 years and a great deal of chance for someone to unearth them.

As for the engravings on the coin, they include portrayals of Emperors Honorius, Leon I, Antonio, Libio Severo, and Valentinian III. These engravings hinted at the approximate dating of the Roman coins.

Logically, if these images are to be confirmed, historians will get a much better idea of how these few emperors actually looked like, correcting all previous assumptions.