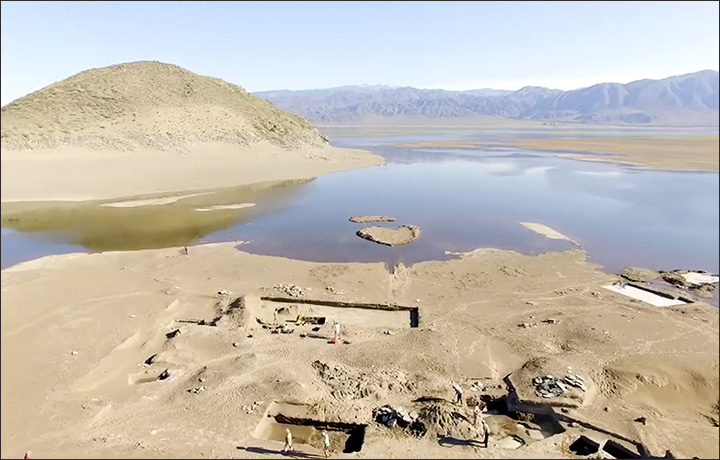 ‘Atlantis’ has risen from the depths of a large made-made lake in Siberia, and experts are in a hurry to excavate and catalog the site as soon as possible before water levels return to their normal.

Archeologists have unearthed what they are calling ‘Russia’s Atlantis‘ after a vast man-made lake has retreated, allowing them to excavate the remnants of civilizations dating back to the Bronze Age and the Ere of Genghis Khan.

The discovery was made in the Tuva Republic in Siberia. There, on an island in the reservoir at Ala-Tey, archeologists have discovered as many as 110 burials.

Water levels have now retreated, but by early July, it is believed the water will return and rise, covering the graves in water up to 15 meters deep. It freezes in winter until it warms up and retreats again for a short period of time next summer.

Archeologists excavating the site have uncovered both ancient human remains as well as a number of artifacts dating back to long lost civilizations from the Bronze age, as well as to the era of Genghis Khan.

This precious archeological site, which emerges and sinks each year, is located at the bottom of the so-called Sayan Sea, an artificial reservoir created upstream of the Sayano-Shushenskaya Dam, Russia’s biggest power plant, reports the Siberian Times.

A race against the water

Scientists can excavate the archaeological site from around mid-May to the end of June, as water threatens to forever destroy the intricate burials, and threatens the graves hidden beneath the water on the reservoir’s bed.

“This site is a scientific sensation,” revealed Dr. Marina Kilunovskaya a researcher at the St. Petersburg Institute of Material History Culture, who leads the Tuva Archeological Expedition.

“We are incredibly lucky to have found these graves of rich Hun nomads that were not disturbed by robbers. We discovered 110 burials at the Ala-Tey burial site, which is usually 15 meters underwater.”

“Another site which was made at what is now the Sayan Seashore is getting quickly destroyed by crumbling soil. It is called Terezin, and there we found 32 graves,” Kilunovskaya added.

Last year, archeologists managed to excavate a sensational burial of a 2,000-year-old mummified ‘sleeping beauty’, which was laid to rest in a stone grave.

The artificial sea helped discover the grave, as the water washed off thick layers of soil, leaving the rectangle-shaped stone structure out in the open.

But despite this, the artificial sea is expected to one day wipe out all traces of the ancient site and its treasures