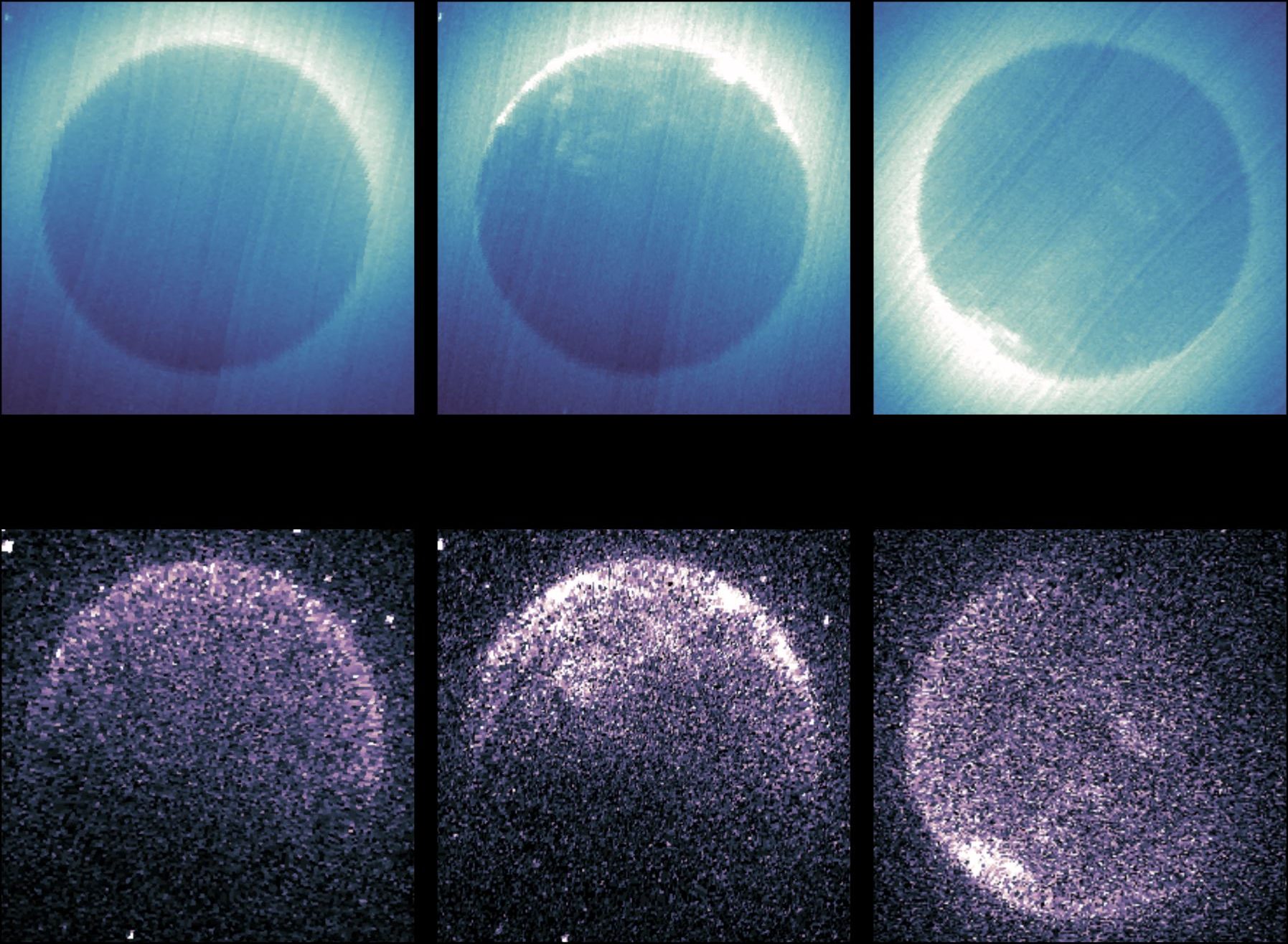 Observations by two spacecraft orbiting Mars have revealed a stunning new kind of aurora on the red planet.

NASA’s MAVEN mission observed dynamic proton aurora events on Mars in collaboration with the UAE’s Emirates Mars Mission (EMM). With EMM’s in-situ plasma observations and MAVEN’s remote auroral observations, we can gain a deeper understanding of the Martian atmosphere. As a result of recent data exchanges between the two missions, this collaboration has been made possible, highlighting the value of multi-point space observations.

The EMM study identified fine-scale structures in proton aurora that spanned Mars’ entire dayside. MAVEN discovered proton auroras in 2018, which are auroras formed when the solar wind, composed of charged particles from the Sun, interacts with the upper atmosphere. These proton auroras typically appear smooth and evenly distributed across the hemisphere as viewed by MAVEN and Mars Express (the European Space Agency). A highly dynamic and variable proton aurora, however, was observed by EMM. Charged particles from Mars are flooded directly into the atmosphere during turbulent conditions on the red planet, producing these “patchy proton auroras.”

“EMM’s observations indicated that the aurora had been so widespread and disorganized that Mars’ plasma environment must have been seriously disturbed, so much so that the solar wind was impacting the upper atmosphere directly wherever we observed auroral emission,” said Mike Chaffin, the lead author of the study and a MAVEN and EMM scientist at the University of Colorado Boulder. “By combining EMM auroral observations with MAVEN measurements of the auroral plasma environment, we can confirm this hypothesis and determine that what we were seeing was essentially a map of where the solar wind was raining down onto the planet.”

Due to the bow shock and magnetic fields surrounding the planet, the solar wind is normally redirected away from Mars’ upper atmosphere. As a result, the patchy proton aurora observations offer insight into rare circumstances when Mars and the solar wind interact chaotically. It is unknown how these conditions will affect the Martian atmosphere, but observations from the EMM and MAVEN will provide insight into these enigmatic conditions.

Scientists have been able to determine the drivers behind the patchy proton aurora thanks to data sharing between MAVEN and EMM. EMUS is an instrument aboard EMM that measures the composition of the atmosphere of Mars and the rate of atmospheric escape to space. Among MAVEN’s plasma instruments are the Magnetometer (MAG), Solar Wind Ion Analyzer (SWIA), and Suprathermal and Thermal Ion Composition (STATIC).

Shannon Curry, the principal investigator at UC Berkeley’s Space Sciences Laboratory, said EMM’s global observations of the upper atmosphere are crucial for MAVEN’s science. The advantages of international scientific collaboration are highlighted as a result of simultaneous observations of atmospheric dynamics and evolution.

Hessa Al Matroushi, the EMM’s Science Lead, agreed. In order to put these new EMM observations into a broader context, the use of MAVEN data has been crucial, she said. Our research is pushing the limits of knowledge, not just about Mars but about the interaction of planets with the solar wind.”

Earth and heliophysics research already benefits from multi-vantage-point measurements. A half dozen Mars orbiters are presently undertaking science observations. Since the southern hemisphere is experiencing summer, which is when proton auroras are most active, multivantage-point observations will be crucial for learning how these events arise. With two spacecraft observing the same region simultaneously, EMM and MAVEN demonstrate the value of discovery-level science about the Martian atmosphere.