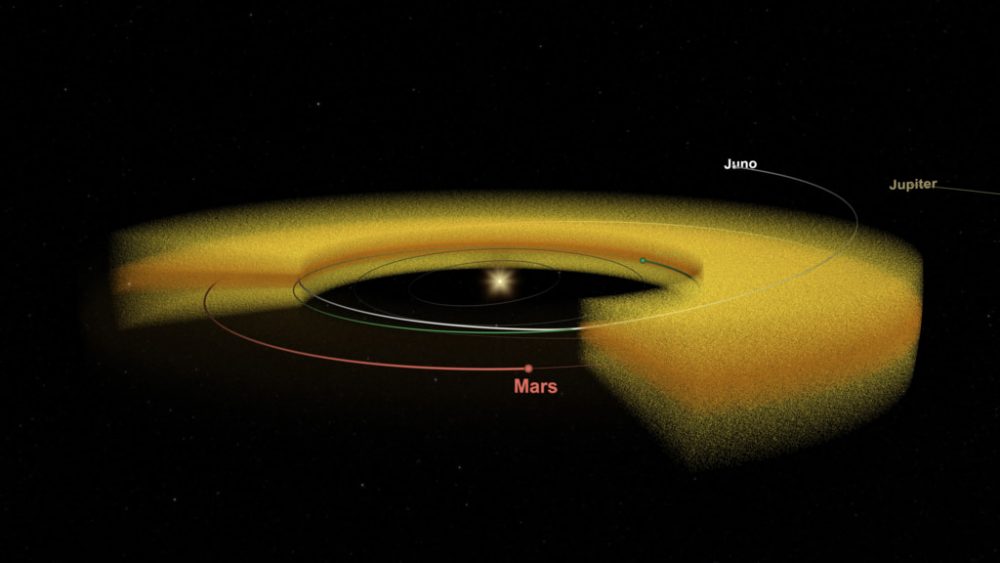 Astronomers believe Mars may be the source of the interplanetary dust we see from Earth.

Astronomers were able to estimate the distribution of interplanetary dust between the orbits of the Earth and Jupiter thanks to the interplanetary station “Juno”. It turned out that two groups of dust can be distinguished, and the primary source of dust particles can be associated with Mars and its satellites.

The space between the planets in our star system is filled with objects of all sizes, orbiting the Sun: from dwarf planets and asteroids to tiny particles. Dust particles less than a micrometer in size are gradually pushed out of the solar system by the pressure of sunlight, while larger particles can drift towards the star due to the Poynting-Robertson effect.

Clouds of interplanetary dust particles are observed in reflected sunlight (zodiacal light) and in the infrared range, in addition, dust samples can be collected in the upper layers of the Earth’s atmosphere or in near-Earth orbit, but the nature of interplanetary dust and its distribution is still poorly understood.

A group of planetary scientists led by John Leif Jørgensen from the Technical University of Denmark has published the results of the analysis of images that were received by one of the star sensors of the interplanetary station “Juno” during its flight from Earth to Jupiter.

The camera was tuned not only to track the stars but also to search for asteroids, which resulted in many pictures of bright tracks. It is assumed that these were small particles (ranging in size from 0.1 to 1 millimeter), knocked out from the surface of the solar panels of the spacecraft by dust particles moving at a speed of 5 to 15 kilometers per second, and have sizes from 1 to 100 micrometers.

Thus, scientists were able to study the distribution of interplanetary dust particles associated with the zodiacal light along the trajectory of the apparatus, which lay within 0.88-2.25 astronomical units from the Sun.

It is assumed that the second group is created due to the Kozai mechanism from particles of the primary group, while the main source of dust is still difficult to determine, a certain contribution can be made by both Mars itself and its satellites.

Particles from the secondary group can subsequently move both in the direction of the Earth and to the main asteroid belt. The quantitative density of interplanetary dust particles observed near the plane of the ecliptic can reach 8 × 10 –13  particles per cubic meter of space.

The researchers note that the results of the work will help not only test the theories of the origin and evolution of interplanetary dust but also develop new materials for the elements of spacecraft that can better resist erosion due to collisions with dust grains, as well as help in plotting the flight paths of future interplanetary stations.