The possibility that there is a supermassive unknown planet, nicknamed planet Nine, at the edge of the solar system, is greater than 90%, say experts.

The new estimates are based on studies that followed after it was claimed such a planet existed, in 2014.

As explained by experts, Evidence of a big, unseen world in the extreme outer solar system continues to mount. Take the recent discovery of the distant dwarf planet 2015 TG387, known as “The Goblin.”

“Planet Nine really is still the only viable explanation for all the things we observe,” says Konstantin Batygin, a theoretical astrophysicist at the California Institute of Technology (Caltech), one of the leading scientists searching for the hypothetical new world of the solar system.

Batygin pegged the probability of the world’s existence at “over 90 percent.”

In January of 2016, Batygin and Caltech researcher Mike Brown attempted to characterize the planet, estimating that it is perhaps 10 times more massive than Earth and orbits the sun at a distance of around 600 astronomical units (AU) on average.

(One AU is the Earth-sun distance, about 93 million miles, or 150 million kilometers.)

So far, astronomers have seen 14 cosmic bodies in the Kuiper Belt that bear the imprint of the pull of a large disturber.

Basically, the elongated portions of the highly elliptical orbits of the objects point in the same direction, in a manner predicted by the models of Planet Nine.

What this means is that Planet Nine explains all the weird orbits of planetoids orbiting our sun beyond Pluto.

“The chances of such a configuration developing by chance alone are less than 0.1%,” said Batygin. “And other possible explanations fall short.”

Some experts have proposed that clustering of cosmic objects was due to the combined pulls of many small objects in the Kuiper Belt, the ring of icy bodies beyond Neptune’s orbit. But a “self-modulator” Kuiper belt would look very different from the actual belt we see, said Batygin.

A recent study suggests that the entire Kuiper Belt (without Planet Nine) does not hold more than 2% of the Earth’s mass, which is not enough to shape the orbits of bodies in the manner observed.

In relation to the unsuccessful search to date with the available telescopes, Batygin said: “If we do not find it in the next five years, the LSST will definitely give the last word on Planet Nine,” making reference to the Great Synoptic Tracking Telescope (LSST), which is being built in Chile and will start operating in 2022. 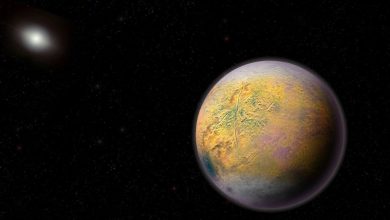 Astronomers Find New World on The Edge of the Solar System