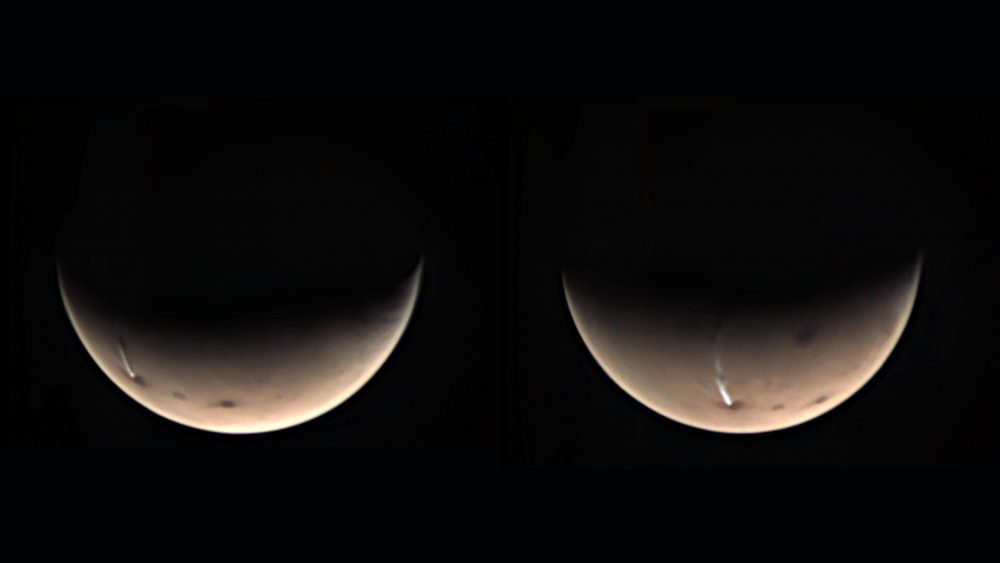 Scientists have been studying the weird elongated Martian cloud since 2018.

Astronomers using data from orbiters were able to trace the evolution of the unusually long cloud of Mount Arsia on Mars. It turned out that it appears in the early morning every spring and summer for several decades, and by noon it completely disappears.

Clouds of crystals of water ice are present in the atmosphere of Mars throughout the year and have been observed by orbiters and rovers and telescopes from Earth. Extensive clouds are usually found in the region of the volcanic highlands of Farsis, and back in the 70s of the last century, the idea was put forward that the terrain is responsible for their formation, which was later confirmed by the devices of the Mariner and Viking series.

For scientists, the study of such clouds is interesting from the point of view of understanding the peculiarities of the climate and circulation in the atmosphere of Mars, in particular, the seasonal distribution of ice clouds near the high mountain regions of Mars, their relationship with dust storms and the evolution of clouds during the Martian day.

Later, it was observed again during spring in the southern part of Mars, and Mount Arsia was the only one of the many volcanoes in Tarsis to have such a curtain of clouds at this time of the year.

However, compiling a complete picture of the dynamics of the cloud proved to be a difficult task due to the limited observation time and the transience of processes in the atmosphere of Mars.

A group of planetary scientists led by Jorge Hernández Bernal from the University of the Basque Country decided to trace the dynamics of the cloud of Mount Arsia, which is called AMEC (Arsia Mons Elongated Cloud). For this, the scientists used data from three Mars-Express instruments, as well as data obtained by the orbiters MAVEN, Mars Reconnaissance Orbiter, Viking-2, and Mangalyaan.

The researchers determined that the cloud over Mars was observed as early as the mid-70s of the last century. The maximum size of AMEC is about 1800 × 150 kilometers, it appears every morning during several months of spring and summer in the southern hemisphere of Mars.

It should be noted that global dust storms slow down cloud formation. AMEC evolves rapidly during the day, appearing at dawn, at an altitude of about 45 kilometers above the western slope of the volcano, and begins to expand westward at a speed of about 600 kilometers per hour, forming a “tail”.

Then the cloud separates from the mountain and almost completely disappears by noon, evaporating. Scientists hope the findings will improve existing climate models for Mars and possibly help predict weather conditions.