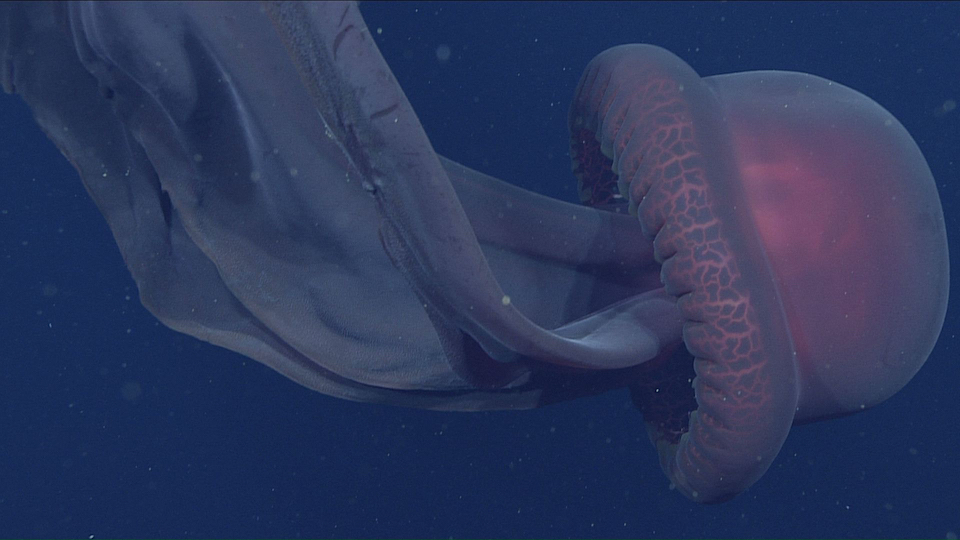 Scientists first discovered Stygiomedusa gigantea in 1899. However, despite the large size and extensive range of these jellyfish, they have been seen only about a hundred times since then.

American biologists have filmed a giant deep-sea phantom jellyfish of the Stygiomedusa gigantea genus. The diameter of the bell of this species reaches one meter, and the length of the four tentacles can exceed ten meters.

As noted on the YouTube page of the Monterey Bay Aquarium Research Institute, this is not the first time S. gigantea has been recorded, but encounters with these giants are so rare that any new footage could provide valuable insight into their behavior and environmental preferences.

Many deep-sea animals are rarely seen by humans. This is not surprising, since getting to their habitats is not easy. It is only through the use of manned and remotely controlled submersibles that biologists can gather valuable information about the ecological preferences and behavior of elusive creatures such as deep-sea squids, octopuses, and anglers.

The staff of the Monterey Bay Aquarium managed to capture another unusual inhabitant of the deep sea. In November of this year, they explored the waters of Monterey Bay using the Doc Ricketts unmanned aerial vehicle. At a depth of 990 meters, the device captured the giant phantom jellyfish Stygiomedusa gigantea from the Ulmaridae family.

The diameter of the bell of these invertebrates is more than a meter, and the length of the four ribbon-like tentacles can exceed ten meters. In addition to their large size, these jellyfish are distinguished by a dark reddish-brown coloration, which makes their appearance especially distinctive.

Jellyfish S. gigantea are among the largest invertebrate predators on the planet. They are believed to feed on small fish and plankton. These creatures inhabit all oceans except the Arctic and can descend to a depth of 6665 meters.

Seen about a hundred times in over 120 years

Scientists first discovered S. gigantea in 1899. However, despite the large size and extensive range of these jellyfish, since then they have been seen only about a hundred times (mostly they were caught by a trawl and therefore heavily damaged specimens). For example, experts from the Monterey Bay Aquarium have met this species only nine times in several thousand dives.

Despite the fact that S. gigantea has already been filmed several times, very little is known about the biology of the species, which makes any additional footage especially valuable.

For example, in 2003, while diving in the waters of the Gulf of California, researchers noticed that a deep-sea fish Thalassobathia pelagica from the Ophidiiformes order kept next to one of these phantom jellyfish. She may have used the jellyfish as a hiding place.

Not all jellyfish should be approached