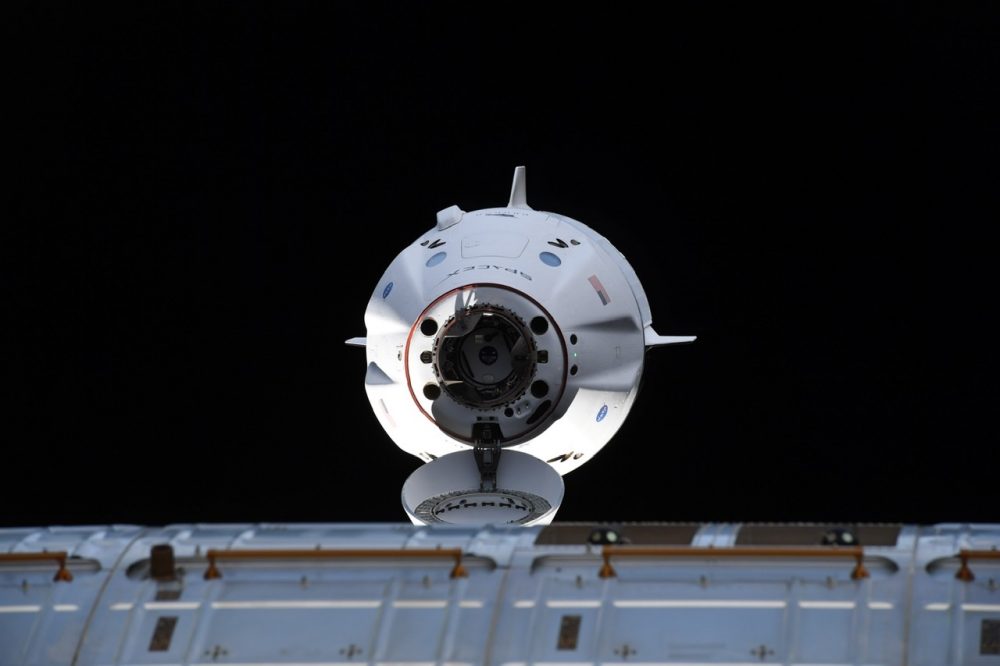 The unidentified object was detected too late for avoidance maneuvers.

During yesterday’s SpaceX launch towards the International Space Station, the Crew Dragon spacecraft passed dangerously close to an unidentified object in space. The mission control had no time to perform maneuvers but fortunately, there was no collision.

Yesterday, we celebrated the implementation of the next stage in the development of returnable space technologies. SpaceX’s Crew Dragon was launched from the Kennedy Space Center towards the ISS with four astronauts on board.

Both the rocket and the capsule were recycled from a previous launch which is a first in cosmonautics. This is the same “Crew Dragon”, which last year performed the first orbital flight of the USA after the completion of the Space Shuttle program.

Prior to today’s launch, the first stage of the rocket was used to launch the four-member crew of the Crew Dragon in November 2020. After the successful launch today, it again made a soft landing on the floating landing platform named “Of course I still love you”.

Earlier today, it was confirmed that the capsule had reached the ISS successfully. With this, the four astronauts begin a six-month mission and will replace four astronauts who will return to Earth next week.

While en-route to the ISS, the astronauts on Crew Dragon were ordered to put on their spacesuits. The reason for this unusual measure was a potential conjunction event with an unidentified object in space.

The mission control team received information of an unknown object by the US Space Command. Even a day later, there is no information about the origin of this space debris but we know that it passed dangerously close to the spacecraft on the cosmic scale.

The closest contact came at around 28 miles away from Crew Dragon. True, this may not sound like a dangerous situation but mission control did not have enough information to be sure whether there would or wouldn’t be a collision. There was no time for evasive maneuvers thus the astronauts were ordered to put on their pressurized suits.

“For awareness, we have identified late-breaking possible conjunction with a fairly close miss distance to Dragon. As such, we do need you to immediately proceed with suit donning, securing yourself in seats. We will be erring on the side of caution to get you guys in a better configuration. The time of closest approach for this event is at 13:43[EST].”

This was the message given to the astronauts by mission control. While Crew Dragon was launched with pre-set directions and was traveling autonomously, it can also be manually controlled by the crew if ever needed.

Fortunately, as the spacecraft approached the unidentified object, it became clear that there is no danger of impact.

For now, we have no confirmation about the origin of the object. It is surprising, however, how late it was discovered. There is room for speculations but I expect that it was nothing more than some kind of space debris or small meteorite. But who knows, maybe it was something more unique? How amazing would that be, right?

Other highlights and achievements of the flight

As already described, this launch was remarkable in many ways. Not only did it include a reusable rocket and capsule but it also achieved several other milestones in global cosmonautics.

1. For the first time, two Crew Dragon spacecraft are flying into orbit at the same time – the previous one (launched in November) has not yet returned and so far remains docked with the International Space Station.

2. The ISS crew will temporarily consist of 11 members. The two Crew Dragons carried four people, and we have a Russian Soyuz in orbit, transporting three.

4. For the second time, Crew Dragon transports a citizen of Japan – the astronaut of the Japanese Space Agency  Akihiko Hoshide.

5. For the first time two manned ships Crew Dragon are attached to the International Space Station.

All four people sent into space today are veterans of previous missions. For Hoshide this is the third flight, for Pesquet – the second. The commander of the Crew Dragon is NASA astronaut Shane Kimbrough with two previous space launches, and the pilot is Megan McArthur with one previous mission.

Interestingly, McArthur was the only one of the four who hasn’t flown to the International Space Station in the past. Her previous expedition was with the Atlantis shuttle to the Hubble Space Telescope in 2009. McArthur is the last person to touch the iconic space telescope with her own hands.