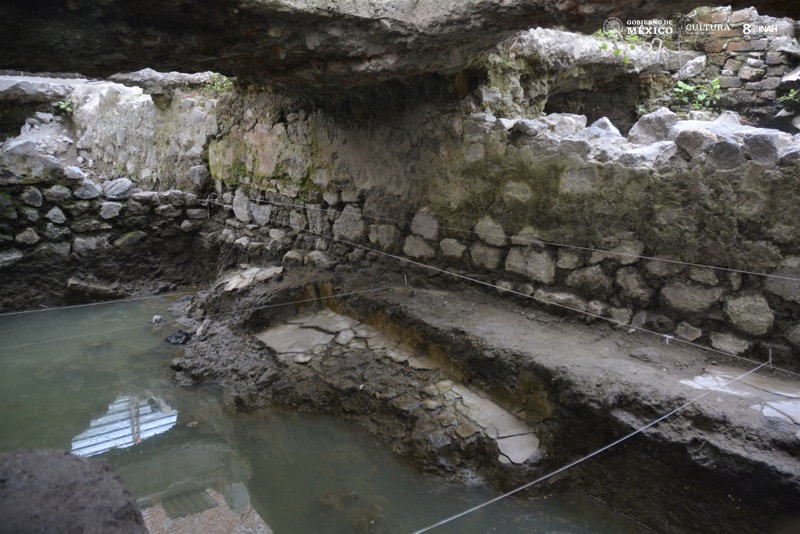 The remains of a pre-Hispanic temazcal discovered on a site near La Merced, in the Historic Center of Mexico City, has allowed experts to accurately locate the neighborhood of Temazcaltitlan, one of the oldest and most important neighborhoods built in the ancient city of Tenochtitlan.

A temazcal a type of low heat sweat lodge, which was introduced by pre-Hispanic Indigenous peoples in Mesoamerica.

In ancient Mesoamerica, it was used as part of a therapeutic ceremony believed to purify the body after exertion such as after a battle or a ceremonial ball game.

Furthermore, the structure is thought to have also been used to heal the sick, improve general health, and was also where women would go to give birth.

Even today similar structures are used by Indigenous cultures of Central America for spiritual healing and health enrichment.

A team of experts from the National Institute of Anthropology and History (INAH), headed by Víctor Esperón Calleja, has revealed the existence of an ancient temazcal, located precisely in the Historic Center of Mexico City.

It dates back to the 14th century and was constructed with adobe blocks and stucco-coated tezontle fragments.

In its central part, you can see the tub or water pool that was used for the steam bath, as well as one of the sidewalks that were part of it.

Based on the remains excavated so far, it is inferred that its dimensions were 5 meters long and 2.98 wide.

“The findings suggest that in the 16th century this area was more populated than we initially thought,” Esperón said.

Excavations on this site also allowed to reveal the vestiges of a house that was possibly inhabited by an indigenous family of noble origin, shortly after the Spanish conquest was completed, during the Early Colonial period (1521-1620).

The archaeological area on Talavera Street has been a “box of surprises” for archaeologists because the area features numerous remains of different temporalities in the history of Mesoamerica, as is the case of an industrial complex for tanning, which should have functioned in the last century of the Spanish Viceroyalty (1720-1820).

This structure adjoins Casa Talavera, according to the findings recorded in the east area of Tenochtitlan’s cultural center.

Archeologists explained that the neighborhood of Temazcaltitlan belonged to the partiality of Teopan (also called Zoquipan), the first territory occupied by the Mexica when they arrived from the “north.”

The Temazcaltitlan area was the original headquarters of the islet in which the sighting of signs predicted by Huitzilopochtli took place, as the monument of “La aguilita”, in the Plaza Juan José Baz, illustrates.

This further confirms the importance of the discovery and the location of the neighborhood.

According to the Aubin Codex, the Aztecs originated from a place called Aztlán. They lived under the ruling of a powerful elite called the “Azteca Chicomoztoca”. Huitzilopochtli eventually ordered them to abandon Aztlán and find a new home. Huitzilopochtli also commanded them never to call themselves Aztecs; instead, they should be called “Mexica.”

As the Mexica made their journey in search of a new home, they were guided by Huitzilopochtli, however,  for a time, Huitzilopochtli left the Mexica, and asked his sister to take care of his people.

Malinalxochitl, Huitzilopochtli’s sister is said to have founded Malinalco. The Mexica, however, resented her ruling and asked for Huitzilopochtli to return to them.

Eventually, he put his sister to sleep and ordered the Mexica to seek out a new place to live.

When Malinalxochitl woke up and realized she was alone, she became furious and desired revenge.

Legend says she gave birth to a son called Copil. When he grew up, he confronted Huitzilopochtli, who had to kill him.

Huitzilopochtli took his heart and threw it in the middle of Lake Texcoco.

After several years, Huitzilopochtli ordered the Aztecs to search for Copil’s heart. He told them that they should build a city where they discovered the heart.

The sign would be an eagle perched on a cactus, eating a serpent, and Huitzilopochtli said it was there where the Mexica would construct their permanent home.

After much traveling, they arrived at the area which would eventually be Tenochtitlan on an island in the Lago Texcoco of the Valley of Mexico.