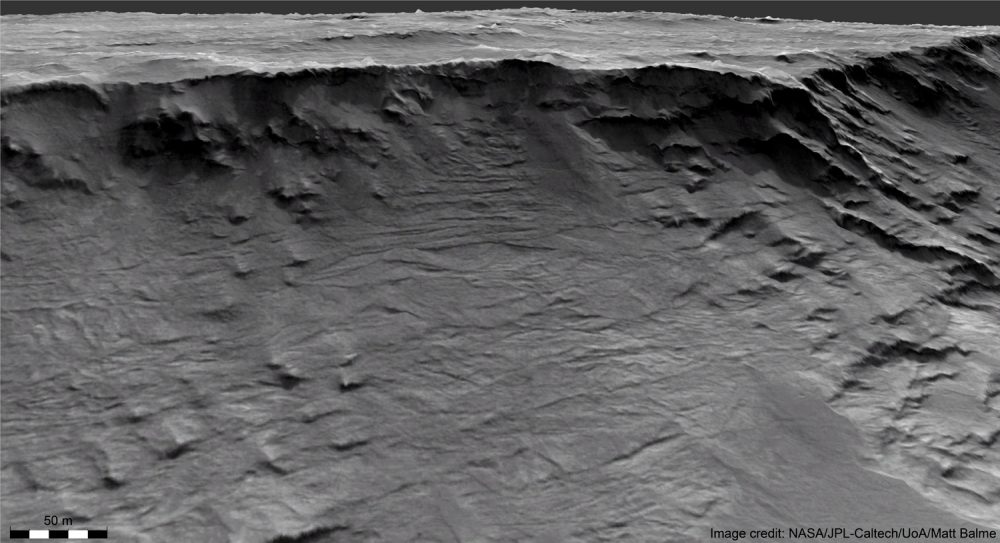 The study adds a new piece to a Martian, extraterrestrial jigsaw puzzle.

Yes, there was once liquid water on Mars, and the red planet was not as desolate and barren as we see it today. The more we explore Mars with our robotic missions, the more we understand how Mars was once much similar to Earth, with massive lakes, oceans, and rivers painting its surface.

Now, we’ve got a series of new images from the red planet and the footage reveals evidence of the existence of rivers that existed for 100,000 years on the planet’s surface, around 3.7 billion years ago. Mars was much warmer at that time and could have even had enough liquid water on its surface to support life as we know it.

Although we’ve known for quite some time about liquid water on Mars, only now have we discovered evidence of “rivers in long-term action preserved in exposed cliff-faces.

An international team of researchers from Italy, the United Kingdom, France, and the Netherlands used high-resolution images captured by the HiRISE camera of NASA’s Mars Reconnaissance Orbiter (MRO) to study the edge of the Hellas Planitia plain on the red planet’s southern hemisphere.

The Hellas impact crater has long been of interest to researchers because it is one of the largest in the solar system, stretching about 9 kilometers from the crater’s base to the rim. Scientists focused on a rocky cliff, about 200 meters high and dating to 3.7 billion years ago. Composed of sediments accumulated over time, these rocks are like those found on Earth and formed by rivers.

“The cliffs located on Mars reveal rivers that continually changed their ravines, creating sandbanks, similar to the River Rhine or to those found in northern Italy,” revealed experts in a study published in the journal Nature Communications.

By analyzing the layers of rocks on Mars, the researchers were able to determine that the channels were around 3 meters deep. This analysis can give more information about its evolution, similar to how geologists used the sediment layers on Earth to understand how our planet changed over time and visualize what it was like millions and billions of years ago.

“For the first time, orbital data has allowed us to examine, through the detailed high-resolution architectural analysis, a large (1500 m by 190 m) pre-late Noachian outcrop, and draw reliable paleoenvironmental interpretations based on sedimentary-stratigraphic evidence,” the researchers explained in the study.

The study provides new pieces to a massive, planetary jigsaw puzzle, providing never-before-seen insight into the amount of liquid water that covered the ancient landscapes on the red planet’s surface.

“OK, it is not like reading a newspaper, but the extremely high-resolution imagery allowed us to ‘read’ the rocks as if you are standing very close to the cliff. Unfortunately, we don’t have the ability to climb, to look at the finer-scale details, but the striking similarities to sedimentary rocks on Earth leave very little to the imagination,” explained Francesco Salese – a geologist at Utrecht University.

The study also provides evidence of prolonged water discharges on Mars that are consistent with precipitation, a mechanism driven by a hydrological cycle.

“The study demonstrates sustained river deposition on Mars 3.7 billion years ago. Such perennially flowing rivers would require an environment capable of maintaining large volumes of water for extensive time-periods, and almost certainly necessitated a precipitation-driven hydrological cycle. More in line with slower climatic change, and less in line with catastrophic hydrologic events. This kind of evidence, of a long-lived watery landscape, is crucial in our search for ancient life on the planet,” concludes Salese.

For the first time, orbital data has allowed us to examine, through the detailed high-resolution architectural analysis, a large (1500 m by 200 m) outcrop, and draw reliable paleoenvironmental interpretations based on sedimentary-stratigraphic evidence,” he added.