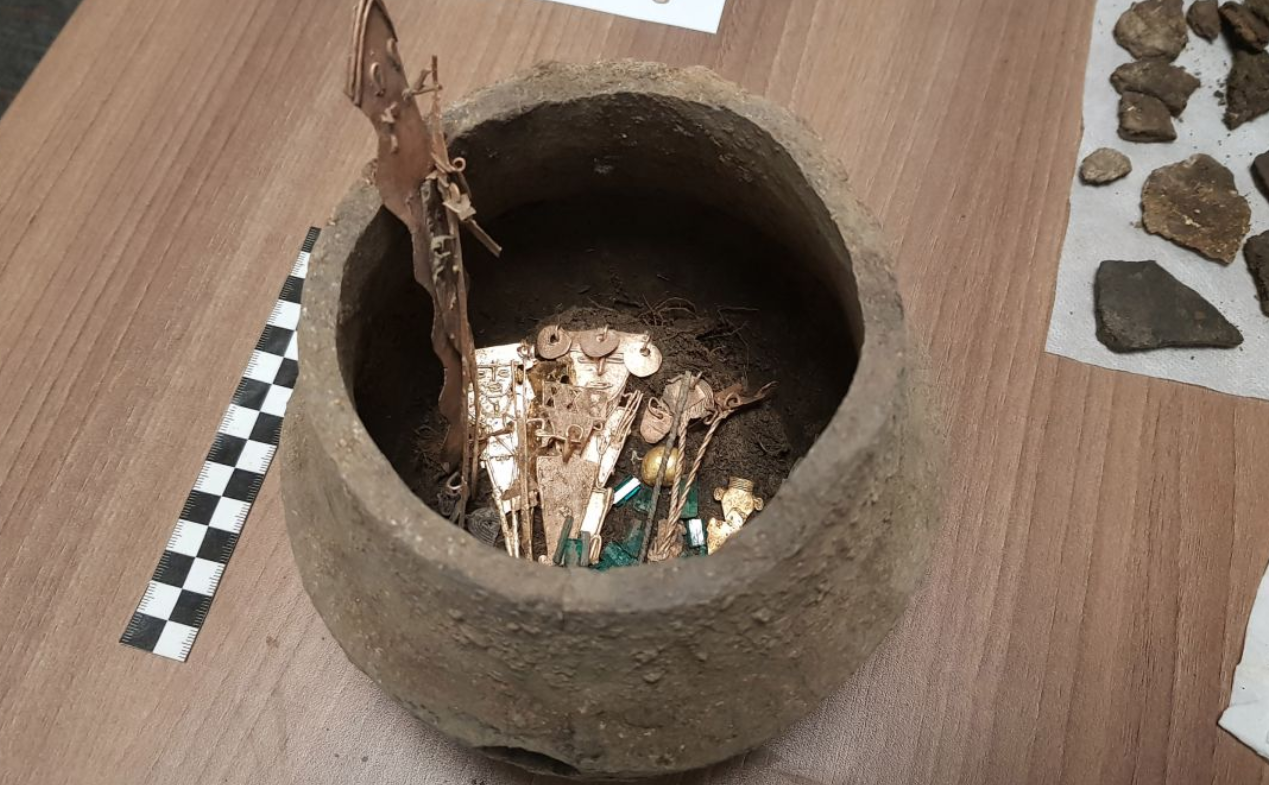 How are these 600-year-old treasures linked to El Dorado?

Colombian archaeologists have discovered eight clay jugs filled with metal figurines and emeralds during the excavation of an ancient temple. The artifacts, which are about 600 years old, were found at a monument of the Chibcha culture, famously associated with the legend of El Dorado.

The Chibcha civilization (Muisca) before the Spanish conquest consisted of several chiefdoms. The Chibcha economy was based on hoe farming, and a large number of plants were cultivated: potatoes, quinoa, corn, tomatoes, sweet potatoes, and many others.

The non-food crops of the Chibcha were grown for cotton, tobacco, and coca, the latter two being used for ritual purposes.

The Indians were not engaged in cattle breeding, and the only domestic animal was a dog. For this reason, hunting and fishing were of great importance in obtaining animal protein.

Chibcha are known for their high level of development of crafts, especially jewelry. They knew how to process metals such as gold, silver, and copper. The religious beliefs of the Indians were based on the cult of the sun and the moon, which were represented in the form of two spouses-deities.

Sacrifices gave rise to the legend of El Dorado

The Chibcha sacrificed in their honor statuettes made of gold, as well as various jewelry. The use of gold dust for ritual purposes during the ceremony, most likely, gave rise to the legend of El Dorado.

Colombian archaeologists led by Francisco Correa examined the ruins of an ancient Muisca city belonging to the Chibcha culture located near Bogotá. As part of the work that preceded the construction of the highway, scientists discovered the remains of a temple and ancient burials.

Excavations have allowed archaeologists to find eight so-called ofrendatarios – clay jugs, which are about 600 years old. Inside the vessels were metal figurines and emeralds.

Some figures outwardly resemble snakes and other animals, others are anthropomorphic, and people are depicted in headdresses, with staffs and weapons. According to scientists, the ancient temple could be associated with the cult of ancestor worship.

Correa noted that similar jugs were previously found on other monuments. Ritual offerings were probably made in them. The temple and the vessels, in his opinion, could be dedicated to the deities worshiped by the Chibcha, including those associated with the moon and the sun.

The downfall of a civilization

The region is known to have been conquered by the Spanish between 1537 and 1540. The Muisca fought bravely against the conquerors but died in battles by the thousands. In addition, this culture began to die out quickly due to unprecedented diseases brought in by Europeans. However, it was not completely exterminated – thousands of Muisca descendants live to this day.