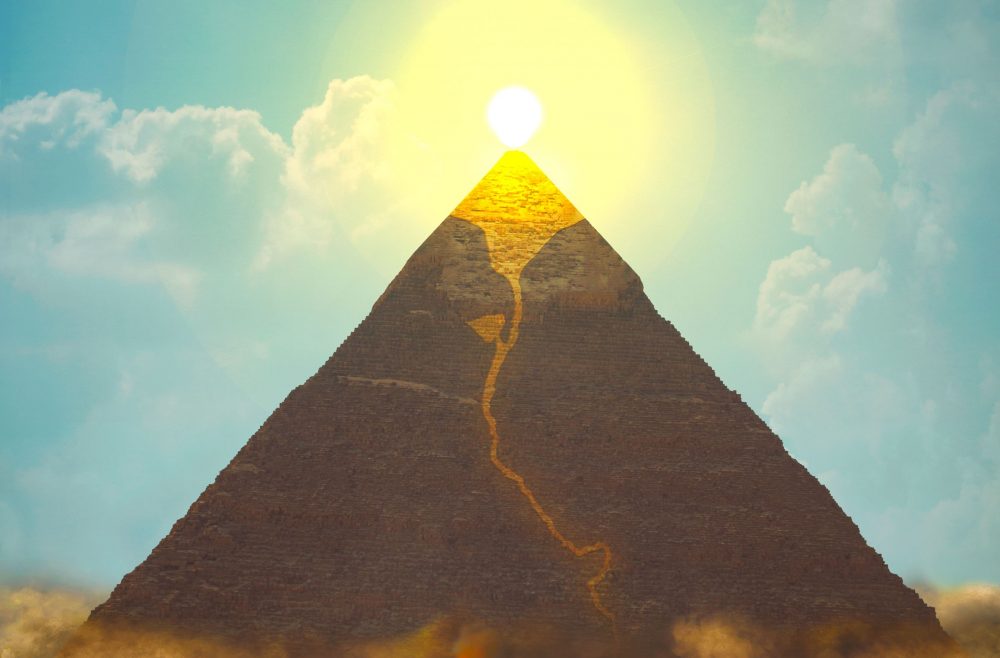 "The pyramid was built in steps, battlement-wise, as it is called, or, according to others, altar-wise. After laying the stones for the base, they raised the remaining stones to their places by means of machines..."

Discovering how the ancient Egyptians built the Great Pyramid of Giza is like discovering Atlantis.

Discovering and understanding how the Pyramid was built is understanding the ancient Egyptian Civilization like never before. We believe it took more than just an ordinary labor force to construct a massive pyramid made of 2.3 million stones more than 4,500 years ago. And this may very well be the case. After all, the ancient Egyptians must have had some sort of techniques, devices, and artifacts that made their job easier.

Surely even 4,500 years ago, the project of building the Great Pyramid must have been a significant one. It must have involved planning. It must have included design. It surely involved math, some examples of physics, as well as geometry.

In other words, the construction of the great pyramid is a wonder of ancient engineering. But engineering is only as good as its engineers and the tools used by them. You can be the best engineer on the surface of the planet, but if you don’t have the right tools at your disposal, you won’t do much.

Luckily for us, we know that the ancient Egyptians were pretty good at engineering stuff, so it’s not hard to understand that they came up with their very own tools to help them build the most complicated pyramid on the surface of the planet. The only problem is that some of the stuff they most likely invented isn’t really out there. Or at least we can’t find it.

Had the ancient Egyptians not been so good at building stuff, they’d never have managed to create such intricate temples, tombs, and pyramids. But before they became good at construction, they must have developed tools and devices that helped them achieve their construction goals. Before they developed tools and devices to help them achieve what they did, they must have acquired knowledge to do so. They must have learned different sciences.

To build some of the most impressive structures in Egypt, its rulers and viziers made sure that a good logistics team backed up every project. In other words, they made sure that when there was an important construction site, the workers were equipped with everything they needed to get the job done. That not only included construction material like limestone, granite, and wood, but the overseers made sure that the people were well-fed, had clothes, medical access, and a roof over their heads.

But again, all of that would have been useless had the ancient Egyptians not developed tools that allowed them to turn a “blueprint” into an actual building. The ancient Egyptians were advanced, so I believe they must have had blueprints and plans drawn and explained on papyri before starting construction. To turn a blueprint into a building, a temple, or a pyramid, in this case, they must have had access to some technology. And they may have very well developed that technology.

The truth is, we don’t know. Although scholars argue the Great Pyramid of Giza was built some 4,500 years ago as the eternal resting place for Pharaoh Khufu, there aren’t any ancient texts that tell us anything about the monument. There aren’t any records that explain who the monument was built for, and who built it, and we have not found any papyri or writings that tell us how the pyramid was built.

Most of what we know is guesswork and theories that have been developed through the complex study of the ancient Egyptian civilization in the past few decades. Despite a great effort to understand how it was done, the truth is, we still don’t know.  We know that for 3,800 years after it was completed, the Great Pyramid of Giza remained the tallest building. And there isn’t a single piece of written evidence that mentions its construction or what type of technology was used to build it.

Without having developed specific construction methods, pyramid development in Egypt would never have evolved from Djoser’s Pyramid to the Great Pyramid of Khufu. This means that around 2,700 BC, some 4,700 years ago, ancient Egyptians were already developed in terms of engineering and architecture, something that would allow them to kickstart some of the greatest construction projects the continent had ever seen.

But the key in doing so is technology. Tools. Instruments, and even possibly machines.

Now when I say machines, I don’t mean the ancient Egyptian developed robots. But they developed devices that would make the effort of building a structure like a pyramid a much easier one.

The thing is, we’ve never actually discovered any traces of devices that may have helped build the pyramid. Or at least we haven’t found one that clearly shows it was used to construct the pyramid.

We did discover an alleged contraption ramp that may have been used in the construction of the pyramid, but we’re not one hundred percent sure. And that’s the problem when we speak about Egypt, its pyramids, and how everything was done. Since there aren’t really any records that tell us how things were done 4,500 years ago, we can only guess what the ancients made use of.

Therefore, when we discover an object of interest, we try to understand as much as we can from the area where it was found and then puzzle back its pieces to get a better picture of what we are looking at. But at the end of the day, we lack written records of important projects like the Great Pyramid of Giza. We lack information on other projects as well. Take the Sphinx as an example. No written records exist that can tell us who carved/created the Sphinx, its purpose, and who the Sphinx represents.

And although the ancient Egyptians have not directly documented their construction work, there are signs and clues we can search for to understand how things were done some 4,500 years ago.

And one such clue is given to us by Herodotus, an ancient Greek writer that described a sort of machine used by the ancient Egyptians thousands of years ago that enabled them to build the Great Pyramid.

Herodotus was a Greek writer who is credited with inventing the field of study known today as `history.’ He was named `The Father of History’ by the Roman writer and orator Cicero for his famous work The Histories but has also been called “The Father of Lies” by critics who claim these `histories’ are little more than tall tales.

And precisely in his work, the Histories, the Greek writer describes the machine used by the ancient Egyptians to build the pyramid. Composed in around 440 BC, the work of Herodotus offers unprecedented insight into the ancient Egyptian civilization.

Although Herodotus described the alleged machine some 2,000 years after the pyramid was supposedly built, it is the only written account of a device that the ancient Egyptians may have used to build the pyramid.

There’s nothing else we’ve discovered so far that can tell us anything about the pyramid’s construction phases and how the ancient Egyptians moved and raised massive stones to construct Khufu’s Pyramid.

Here is the description by Herodotus of the machine that was used to build the pyramid:

This may or may not have been one of the devices invented by the ancient Egyptians and used in their history to build some of their most impressive structures, including the Great Pyramid of Giza.

Sadly, we can’t really know unless archeologists manage to excavate the machine’s remnants described above.

So for now, the only thing that’s left is to continue exploring the immediate vicinity of the pyramids, hoping to one day recover, from the depths of Egypt’s golden sands, clues that help us solve the riddle of the pyramids and how they were built in Egypt more than 4,700 years ago.

Until then, the only thing we can do is continue dreaming about the Pyramids, Pharaohs, and a civilization that developed in the Nile Delta before history was written, one that would rise and build structures that overcame the test of time.