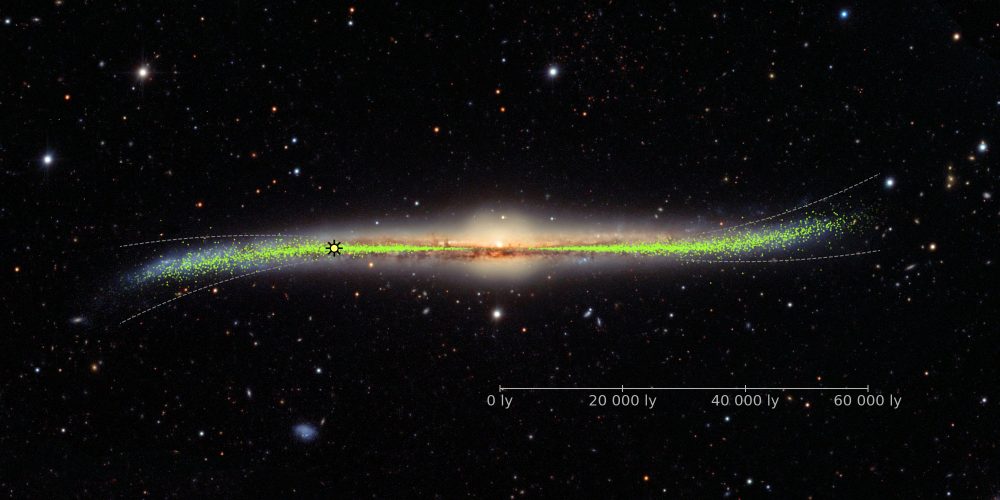 Our planet isn't flat, and guess what? Neither is our galaxy.

An international team of scientists has created a three-dimensional map of the Milky Way, the largest to date, and the results have been published in the journal  Science.

By measuring the distance from our Sun to thousands of pulsating stars scattered throughout our galaxy, researchers have managed to produce a 3D map that reveals the S-shaped structure of the combined star disk of the Milky Way galaxy, our cosmic address.

Earth isn’t flat, and the Milky Way isn’t either.

“Our map shows that the Milky Way disk is not flat. Instead, it is deformed and twisted in shape,” revealed study co-author Przemek Mróz of the University of Warsaw in Poland.

“This is the first time we can use individual objects to display it in three dimensions,” he added.

Much of the current knowledge of our galaxy’s spiral shape and structure is based on indirect measurements of celestial objects and inferences based on other distant galaxies in the Universe.

But as scientists have revealed, the galactic map produced by these limited observations is incomplete.

Like numerous distant lighthouses, the classical Cepheids (massive stars that burn hundreds, if not thousands, of times brighter than our Sun) pulse regularly and are visible through the vast interstellar dust clouds that often obscure less bright interstellar objects.

And precisely thanks to periodic variations in brightness, distances to these stars can be accurately determined.

Warsaw University researcher Dorota Skowron, along with scientists from the Ohio State University in the United States and the University of Warwick, in the United Kingdom, traced the distance to more than 2,400 cepheids along the Milky Way,  most of which were identified by the Optical Gravitational Lensing Experiment (OGLE), a project that helped double the number of known galactic classical cepheids.

By assigning coordinates to each distant pulsating star in relation to our Sun, the researchers managed to develop a three-dimensional model of the Milky Way of very high precision.

The result is a stunning, never-before-seen map of the Milky Way Galaxy.

The study results have allowed astronomers to understand our cosmic neighborhood better and accurately illustrate the galaxy’s shape.

And it’s not flat, but it has a strange shape.

As noted by Space.com, “this new map helped reveal more details on distortions that astronomers had “previously detected in the shape of the Milky Way.”

It took scientists six years to produce the map, but as revealed by participating astronomers, “it was worth it.”

We’ve found that the galaxy’s disk is not flat at a distance of over 25,000 light-years from the galactic core. It is warped. This warping was possibly caused by the galaxy’s interactions with surrounding galaxies, intergalactic gas, or even dark matter.

“Warping of the galactic disk has been detected before, but this is the first time we can use individual objects to trace its shape in three dimensions,” explained Mróz in a statement.

The astronomers explained that the amount of ‘warping’ spotted in our galaxy was surprisingly pronounced.

“It is not some statistical fact available only to a scientist’s understanding,” Mróz said. “It is apparent by eye.”