One of the most enigmatic areas in the ocean, shrouded in mystery, tales and paranormal legends is without a doubt the so-called Bermuda Triangle, a loosely defined region located in the western parts of the Northern Atlantic Ocean. There, a number of ships and aircraft have supposedly gone missing since time immemorial. However, a nearly identical area of the ocean exists in the Pacific Ocean and is known as the Dragon’s Triangle where similar disappearances have occurred.

Popular culture has connected various disappearances to the paranormal or activity ranging from alien abductions, secret underwater bases, magnetic anomalies, and even Atlantis.

Despite the fact that skeptics dismiss the area of the Bermuda triangle as being of particular interest, documented evidence indicates that a significant percentage of the incidents have remained unexplored.

Nonetheless, another great deal of alleged disappearance was found to be very spurious, inaccurately reported, or embellished by later authors.

The Bermuda triangle, which forms a vast area connecting in an imaginary triangle Florida (Key West), Puerto Rico, and Bermuda, is among one of the most heavily traveled shipping lanes in the world, and countless vessels cross through the imaginary triangle coming from ports in America, Europe, and even Africa.

Furthermore, Cruise ships and pleasure craft regularly sail into the region, and commercial and private aircraft routinely fly over it, without any issues.

Nonetheless, the area has attracted great interest over the years, since many authors, writers, and news outlets have reported that sinister disappearances tend to occur more frequently within the Bermuda Triangle than any other area outside of it.

In fact, according to the United States Coastguard, the area is as ordinary as any other location, and is not regarded as a special area of interest:

The Coast Guard does not recognize the existence of the so-called Bermuda Triangle as a geographic area of specific hazard to ships or planes. In a review of many aircraft and vessel losses in the area over the years, there has been nothing discovered that would indicate that casualties were the result of anything other than physical causes. No extraordinary factors have ever been identified.

In other words, and statistically—officially—speaking, there is no such thing as the Bermuda Triangle, because there isn’t anything out of the ordinary there.

Sometimes referred to as the Pacific Bermuda Triangle, just as its counterpart in the Atlantic, this region too has been heavily connected with paranormal events.

In the above image, the red dot marks the actual danger area where Japan Coast Guard warned in 1953 according to “The Bermuda Triangle Mystery – Solved” by Larry Kusche.

Dubbed in Japanese as ma no umi which translates to evil sea, troublesome sea, or dangerous sea, the area has been described as one of the most dangerous maritime locations on the surface of the planet.

One of the first disappearances recorded inside the Dragon’s Triangle was actually a false alarm. In January of 1955, the Japanese vessel Shinyo Maru No. 10 lost radio contact inside the boundaries of the supposedly Devil’s Sea and Japanese newspapers labeled the location as ma no umi. However, ten days later, the Japanese coastguard discovered the ship.

Nonetheless, other ships have been lost and Japanese Newspaper the Yomiuri Shimbun has created a map of the area where numerous vessels have been lost. This region has been classified by the Yokohama Coast Guard Office as a special area of danger.

The concept of the Devil’s Sea was introduced to the western world by American paranormal writer in 1974 when he published his book the Bermuda Triangle. The writer claimed that “nine modern ships and several hundred crews were lost without traces between 1950 and 1954.” In 1989, he introduced the concept Dragon’s Triangle in the book by the same name.

Berlitz continued promoting the idea that five Japanese military vessels disappeared while on maneuvers near Japanese shores in early 1942, and that the area was of special interest.

One of the more mysterious stories regarding the alleged Bermuda Triangle of the Pacific can be traced back to the Great Mongol Empire and Kublai Khan, the fifth Great Khan, the grandson of Genghis Khan. An army of more than 40,00 tried to make their way to Japan in 1274 and 1281 AD.

Both attempts were futile and the army never made it to Japan since both invasions failed and all soldiers were lost supposedly inside the triangular area that makes up the Devil’s Sea.

Eventually, the idea to invade Japan was forgotten and the Japanese saw a need to thank God for sending massive typhoons that wiped out their enemies.

The etymology behind the Dragon’s Triangle comes from Chinese myth about dragons that live beneath the surface of the water. According to legends, the underwater Dragon’s—terrifying monsters—are known for attacking ships that pass above them in order to satiate their hunger.

Stories, myths, and legends about underwater Dragon’s can be traced back more than 3,000 years.

The exact location of the Dragon’s Triangle varies depending on which sources you consult. Usually, it is believed to run from Taiwan to the volcanic island of Miyake-Jima. As noted by Skeptoid, “Miyake-Jima and Iwo-Jima lie along the Izu-Bonin volcanic arc, a line of underwater volcanoes and islands that’s part of a system stretching 2500 kilometers from Japan to Guam.”

Although many people have tried finding a paranormal explanation to the enigmatic area of ocean, it more likely that the disappearances—which may not be so numerous after all, can be attributed to natural phenomena.

Some of the various explanations to the disappearances of vessels inside the Devil’s Sea include the existence of underwater volcanoes: eruptions of such volcanoes could see vessels being swallowed by the ocean.

Another possible explanation is the presence of methane hydrates on the ocean floor.

When methane explores, bubbles inside the water travel to the surface and can destroy passing vessels.

Another possible explanation to the missing vessels can be hot and cold currents that create “vile vortices” that may swallow the ships passing by.

Whether or not the Bermuda Triangle or the Dragon’s triangle are responsible for more unexplained disappearances than any other part of the ocean is difficult to tell, but skeptics agree that the Bermuda and Dragon’s Triangle are no more than a modern invention, made popular by imaginative authors who seem to love mystery just a bit too much. 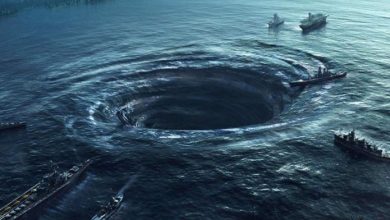