Conspiracy theorists have been obsessed with the idea that the Large Hadron Collider (LHC)  is capable of generating black holes or even open the doors of hell, letting all kinds of entities to our world.

However, now warnings come not from conspiracy theorists, but from a well-respected British astronomer: Lord Martin Rees.

Lord Rees claims that a massive incident at the LHC could reduce the planet to a hyperdense sphere about 100 meters in diameter.

“The first of the frightening possibilities of a flaw in the LHC would be the formation of a black hole that would absorb everything that surrounds it,” wrote the scientist in his book On the future: perspectives for humanity, which will hit the stores in the next weeks.

But the dangers are endless, Lord Martin Rees seems to think.

‘The second scary possibility is that the quarks would reassemble themselves into compressed objects called strangelets.’

“Initially, this would be harmless, “Lord Rees explained, adding that according to some hypotheses, the strangelets could, “by contagion, convert anything else it encounters into a new form of matter, transforming the entire earth in a hyperdense sphere about one hundred meters across.”

But the risks the astronomer foresees do not stop there, since empty space, “the arena in which everything happens”, is “fragile and unstable”, and it has latent in it “all the forces and particles that govern the physical world. The present vacuum could be fragile and unstable”.

Therefore, some speculation indicates that the concentrated energy that is created when the particles collide could trigger a “phase transition” that would tear apart the structure of space. ”

This would be a cosmic calamity, not only a terrestrial, one” he writes in On The Future.

“Innovation is often dangerous, but if we do not give up the risks, we may renounce the benefits,” said Lord Rees, who finally warned physicists that they should be “prudent about conducting experiments that generate unprecedented conditions, even in the cosmos.”

The Large Hadron Collider started colliding particles some eight years ago, in 2010.

Inside the 27-km LHC ring, protons travel at nearly the speed of light and collide at four interaction points. The collisions generate new particles which are later measured by a number of detectors located in the interaction points.

Scientists hope that by analyzing these collisions, they will be able to understand the laws of nature, and how the universe came into existence.

In 2012, research at the LHC allowed scientists to discovered the Higgs Boson, an elementary particle in the Standard Model of particle physics.

For those who are worried about LHC causing the end of the world, CERN writes on their website that “The LHC Safety Assessment Group (LSAG) reaffirms and extends the conclusions of the 2003 report that LHC collisions present no danger and that there are no reasons for concern.” 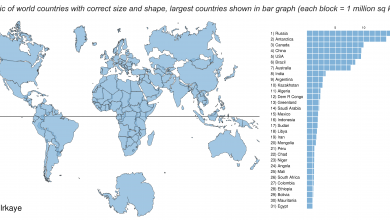 Our World Maps are Wrong, And This Graphic Shows the World as it Really is