A researcher from the University of Bristol claims to have deciphered the message of the mysterious Voynich manuscript, a fifteenth-century book written with indecipherable language, accompanied by striking illustrations.

The manuscript has puzzled experts ever since its discovery and countless researchers have claimed to have deciphered it, arguing that the ‘world’s most mysterious text’ is a combination of codes, magic spells, and even alien messages.

But never have experts agreed upon its meaning.

The handwritten book was found in 1912 by an antiquarian named Wilfrid Voynich, and for more than one hundred years the manuscript’s message has remained a message we have not been able to understand.

Cryptographers, codebreakers, linguists, even computer programs tried breaking its code but never has anyone successfully translated it.

And since no one was able to decipher it, experts decided that the manuscript was actually incomprehensible writing, and was most likely a practical joke.

As reported by Phys.org, the researcher from Bristol University took two weeks to identify the language and writing system of the book, considered the most mysterious text in the world.

The study detailing what is written in the book is detailed in the Romance Studies magazine.

As noted by Dr. Gerard Cheshire that which was penned down in the manuscript is actually a dead language – proto-Romance.

The researcher argues that by studying symbols and their descriptions he has managed to decipher the meaning of the letters and words.

“I experienced a series of ‘eureka’ moments whilst deciphering the code, followed by a sense of disbelief and excitement when I realized the magnitude of the achievement, both in terms of its linguistic importance and the revelations about the origin and content of the manuscript,” revealed Dr. Cheshire.

The manuscript is also thought to include matters of the female mind and parenting.

The text which was radiocarbon dated to the 15th century is beleived to have been written in accordance with   Catholic and Roman pagan religious beliefs of the time.

“It uses an extinct language. Its alphabet is a combination of unfamiliar and more familiar symbols. It includes no dedicated punctuation marks, although some letters have symbol variants to indicate punctuation or phonetic accents,” explained Dr. Cheshire.

“All of the letters are in lower case and there are no double consonants. It includes diphthong, triphthongs, quadriphthongs and even quintiphthongs for the abbreviation of phonetic components. It also includes some words and abbreviations in Latin.”

Had you asked this question a few months ago, and googled for an answer, you would have found anything from stranded aliens on Earth to audacious alchemists.

But according to Dr. Cheshire, the manuscript was most likely compiled by Dominican nuns as a source of reference for Maria of Castile, Queen of Aragon, who is the great aunt to Catherine of Aragon.

Catherine of Aragon was Queen of England from June 1509 until May 1533 as the first wife of King Henry VIII; she was previously Princess of Wales as the wife of Henry’s elder brother Arthur.

“It is also no exaggeration to say this work represents one of the most important developments to date in Romance linguistics. The manuscript is written in proto-Romance—ancestral to today’s Romance languages including Portuguese, Spanish, French, Italian, Romanian, Catalan, and Galician. ”

“The language used was ubiquitous in the Mediterranean during the Medieval period, but it was seldom written in official or important documents because Latin was the language of royalty, church, and government. As a result, proto-Romance was lost from the record, until now.”

But what if it has not been cracked?

An article by Ars Technica draws caution saying that this is not the first time that experts have actually said they’ve deciphered the manuscript.

As explained in their article, ‘proto-Romance language’ is not a thing.”

Lisa Fagin Davis, executive director of the Medieval Academy of America revealed to Ars Technica “how the fundamental underlying argument—that there is such a thing as one ‘proto-Romance language’—is completely unsubstantiated and at odds with paleolinguistics.” 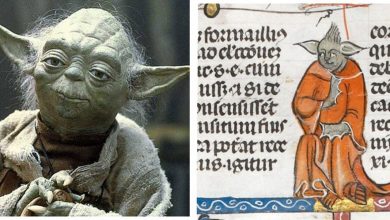 Yoda, Is That You? Image of Star Wars’ Master Yoda Found in 14th Century Manuscript