According to a recent scientific study, the Nile River is six times older than previously believed and its origin dates back to around 30 million years ago, according to a study by the University of Texas at Austin published in Nature Geoscience.

The recent study has revealed that had it not been for the movement of the earth’s mantle that kept the river in its course, the Nile would have turned west a long time ago, probably changing the course of history along with it.

In Ancient Egypt, the Nile River was of great importance not only for daily life but for their religious beliefs as well.

The ancient Egyptians considered the river to be the source of all life. Its constant path to the north has fed the fertile valleys of northeastern Africa for millions of years and, in doing so, shaped the course of human civilization.

“One of the big questions about the Nile is when it originated and why it has persisted for so long,” revealed lead author Claudio Faccenna, a professor at the UT Jackson School of Geosciences. “Our solution is actually quite exciting.”

The Greek historian Herodotus wrote that “Egypt was the gift of the Nile”, and he wasn’t wrong. Providing early people with unending sustenance, the Nile River certainly plaid a crucial role in the development of the ancient Egyptian Civilization.

The Nile River also made it possible to easily connect major parts of the country. The Nile is also believed to have played an important role in allowing the ancient Egyptians to transport massive stones from Lower to Upper Egypt.

Furthermore, The Nile River was also an essential part of ancient Egyptian spiritual life. Hapi was the god of the annual floods, and both Hapi, as well as the pharaoh, were thought to control the Nile’s flooding.

In a religious sense, the Nile River was thought to have been a causeway from life to death and the afterlife for the ancient Egyptians where the east was seen as a place of growth and birth, while the west the place of death, as the Sun god Ra, underwent birth, death, and resurrection each day as he crossed the sky.

The results of the new study should resolve a historical debate about the age of the river and provide evidence that the slow movement of the deep mantle of our planet is one of the key forces that shape the landscape and geological processes of our Earth.

The new study saw an international group of scientists connect the tilted nature of the Nile’s topography with a mantle rock conveyor belt that pushes against the highlands of Ethiopia in the south and pulling the surface to the north. From beginning to end, the gentle gradient keeps the Nile in a constant northward direction.

The new study involved experts tracing the Nile’s geological history by studying ancient volcanic rock in the Ethiopian Highlands, and then correlating it with the massive river sediment deposits buried beneath the Nile’s Delta.

The evidence researchers found suggests that after rising dramatically, the Ethiopian highlands have remained at a similar height for millions of years, a feature that experts attribute to the support of the mantle rock beneath. 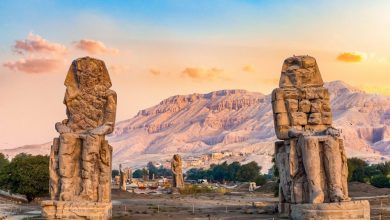 Multi-Ton Stones: Here Are 5 of the Largest Stones Moved in Ancient Egypt

10 Things You Probably Didn’t Know About ‘Khufu’s Ship’, the Ancient Vessel Buried in front of the Pyramids