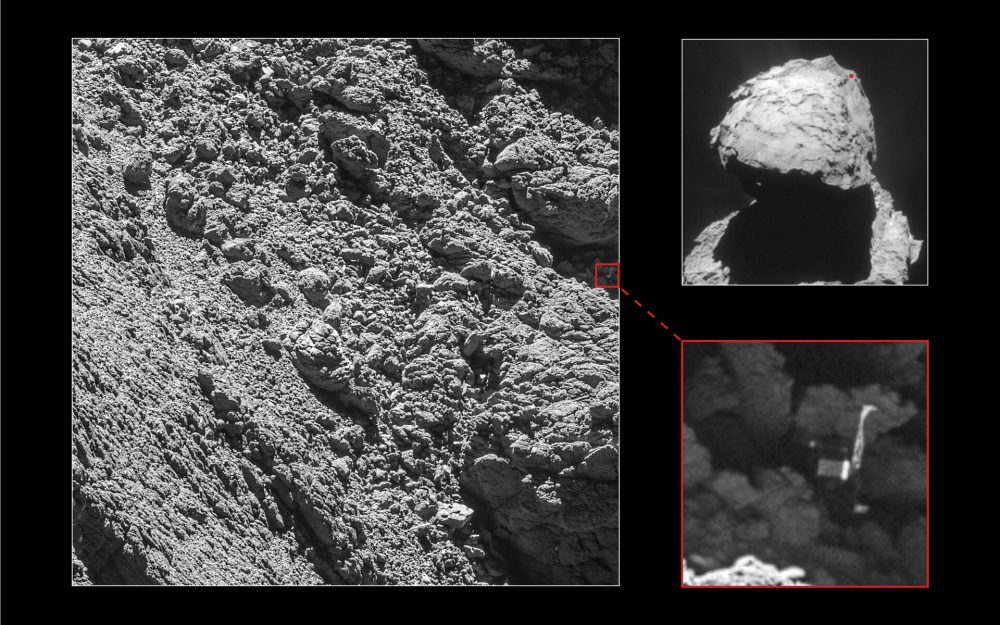 The Philae Space Probe unexpectedly was unable to make a smooth landing on the 67P/Churyumov-Gerasimenko comet, revealing the soft surface of the comet upon contact.

More and more curious discoveries of strange stellar objects are being revealed literally on a daily basis. Water on the Moon, unexpected lightning sprites on Jupiter similar to those in our atmosphere during thunderstorms, alien molecules on Titan, and comets with surprisingly soft surfaces. This year may have been an unexpectedly unpleasant experience but we sure got more than enough curious discoveries to keep us occupied during the quarantine.

On August 3, 2014, the Rosettas OSIRIS spacecraft took a picture with a narrow-angle camera of comet 67P / Churyumov-Gerasimenko. It was received on August 6, 2014, by the European Space Agency (ESA) and shows the comet from a distance of 285 km.

The Rosetta spacecraft made a historic encounter with the comet on August 6, 2014, culminating in a 10-year chase through the solar system at a distance of six billion kilometers. In November of that year, a robot science lab called Philae was sent to the surface to make the first comet landing in history.

Discovering the strange soft surface of the comet

In November 2014, the small space probe Philae struck Comet 67P / Churyumov-Gerasimenko and bounced a mile and a half up, then fell and overturned on the surface, finally resting under a rock, one foot sticking unceremoniously in the air.

Now, scientists from the European Space Agency, looking at Philae’s records for the last time, have discovered that as the probe jumped over rocks on the comet’s surface, it cut rocks and debris to reveal the strange, ancient ice below.

Unexpectedly, the ice turned out to be extremely soft in something that resembles fluffy foam, a discovery that should help scientists improve future landing attempts. According to Matt Taylor, one of the leading scientists participating in the project, the knowledge of the comet’s soft surface will be particularly useful during the designing process of the future landing gear.

Why was Philae unable to successfully land?

Dr. Taylor believes that even if the harpoons from the probe fired, they may not have been able to wedge and grip the fluffy surface.

Philae was part of ESA Rosetta’s mission to make the comet’s first soft landing. It launched in 2004, eventually arriving at 67p in 2014 when traveling between Mars and Jupiter.

The probe was released by the Rosetta spacecraft on November 12 of that year, equipped with a thruster and two harpoons to attach it to a place of contact called Aguilkia.

However, the propulsion system failed to fire and the anchors did not deploy properly, allowing the probe to bounce off the surface and engage in a two-hour flight, during which it collided with the edge of the cliff and threw itself at its second point of contact.

Philae eventually stopped in the Abydos landing site, in a sheltered spot that was identified in Rosetta’s images 22 months later. Lawrence O’Rourke, an ESA scientist who played a leading role in finding Philae, wanted to find the place where the probe touched the comet.

With a team of scientists and engineers from the mission, he collected data from the instrument onboard both the Rosetta and Philae orbiters to find the location of the missing spot where the comet touched.

A bright piece of cut ice was spotted by an orbital camera, and the location was confirmed by measurements taken from Philae’s boom arm when it hit the surface. A re-analysis of the touch data found that Phila had spent nearly two whole minutes at the comet’s second touch, making at least four different surface contacts while plowing on it.

A particularly remarkable imprint revealed in the images was created when Phila’s roof sank 30-40 cm into the ice, still leaving it recognizable.

Photographs and images taken by the Rosetta spacecraft show gleaming bright spots where the lander has cut off the surface, revealing water ice covering an area of about 3.5 square meters.

The team believes that the place where the probe touched the comet represents the overall state of the comet’s interior when it formed about 4.5 billion years ago.