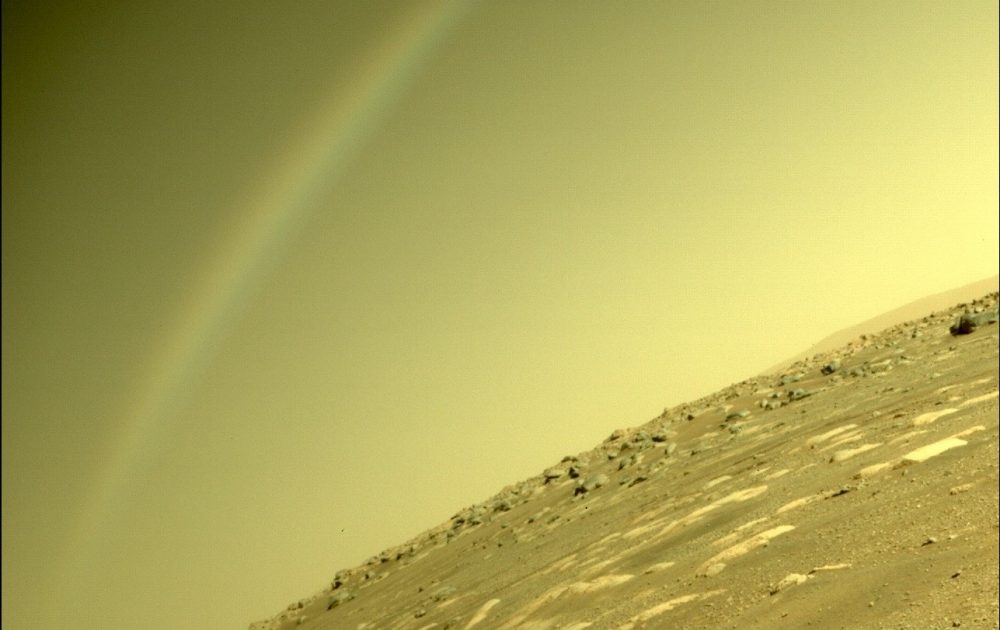 People really thought they saw a rainbow on Mars but such are impossible on the Red Planet.

Several days ago, the Perseverance rover completed the operation to land the first extraterrestrial helicopter “Ingenuity” on the surface of Mars. Then a day later, it was announced that the helicopter successfully survived its first night on the surface which means that all systems are working normally and the first flight will surely take place later this month.

Each of these operations is and will be a groundbreaking success on its own but something quite else drew the public attention and raised a lot of questions. As soon as Perseverance landed the helicopter, it snapped a color photograph that was sent back to Earth as confirmation.

A rainbow on Mars?

People immediately noticed a unique feature in the image that seemed like a real rainbow on Mars. This started a worldwide discussion about the phenomenon and many believed that this really was a rainbow. But it isn’t.

Many have asked: Is that a rainbow on Mars? No. Rainbows aren't possible here. Rainbows are created by light reflected off of round water droplets, but there isn't enough water here to condense, and it’s too cold for liquid water in the atmosphere. This arc is a lens flare. pic.twitter.com/mIoSSuilJW

According to scientists who responded, rainbows like those on Earth cannot appear on Mars. There is a simple explanation. There is not enough water in the Red Planet’s atmosphere for light reflection to create a rainbow.

NASA engineers said that this cannot be a rainbow, it is just lens distortions that are caused by the special structure of the lenses. A similar effect can be observed if direct sunlight falls into the lens of the smartphone camera. With this, the debate was closed. Perseverance did not photograph a rainbow on Mars.

People often fail to realize that although the Martian landscape appears to be similar to Earth’s deserts, for example, the processes that occur there are completely different. And there always is a good and logical explanation. We only need to ask for it.

If all checks are successful, then the first attempt to climb three meters up will take place no earlier than the evening of April 11, and its results will arrive on Earth only the next day. In total, the drone will operate on Mars for 30 sols (Martian days).

The payload of the helicopter consists of a color camera, data exchange with the rover is carried out using an antenna fixed together with solar panels above the propellers. The drone is powered by lithium-ion batteries. The drone’s estimated maximum lift in the conditions of the Martian atmosphere is 5 meters, and the range is up to 300 meters.

Once the 30-day flight campaign of Ingenuity ends, the Perseverance rover will finally begin its own mission. If you have missed the main scientific goal ahead for some reason, the rover will study the Jezero crater in search of signs of ancient life.