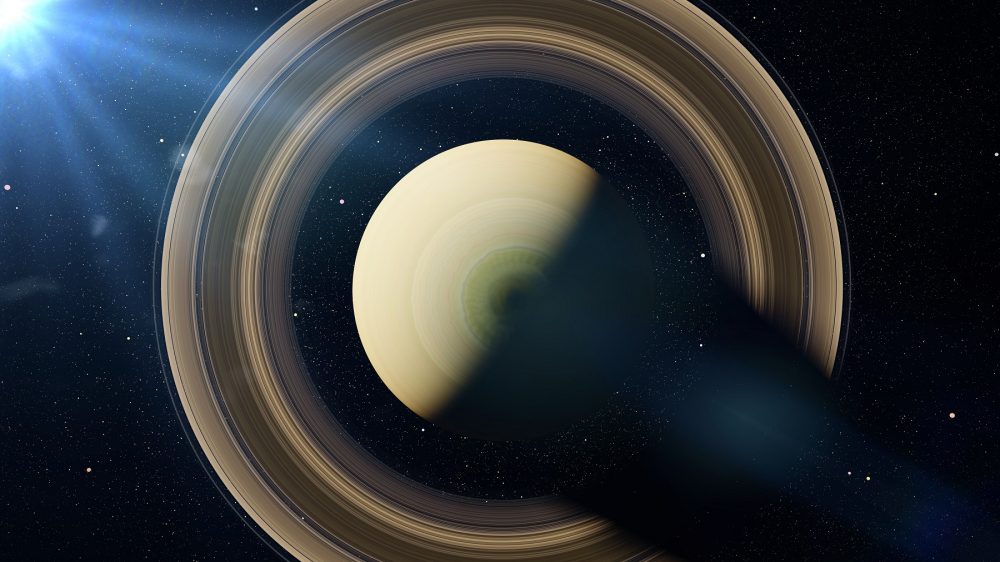 Saturn's upper atmosphere is really hot, and scientists think they finally know why.

The upper layers of the atmospheres of the gas giant planets (Saturn, Jupiter, Uranus, and Neptune) are hot, just like layers of atmosphere on Earth. But unlike Earth, which is relatively close to its star, the Sun is too far from the solar system’s outer planets to explain it.

This mysterious heat source has been one of the great mysteries of planetary science. However, a new analysis of data gathered by NASA’s Cassini spacecraft may have found a viable explanation for what keeps Saturn’s upper layers, and possibly the of other gas giants, so hot.

the auroras at the planet’s north and south poles. Electric currents, triggered by interactions between solar winds and charged particles from Saturn’s moons, ignite the auroras and heat the upper atmosphere.

The new data suggests that the elusive heat source on Saturn may be the auroras on the planet’s northern and south poles. Astronomers have now proposed that electric currents, triggered by interactions between solar winds and charged particles from Saturn’s moons, ignite the auroras and heat the upper atmosphere.

The new details, published in Nature Astronomy, offer the most comprehensive mapping to date of the temperature and density of the upper atmosphere of a gas giant, a region not well known to planetary scientists.

“Understanding the dynamics really requires a global view. This dataset is the first time we’ve been able to look at the upper atmosphere from pole to pole while also seeing how temperature changes with depth,” explained Zarah Brown, lead author of the study and a graduate student in the University of Arizona Lunar and Planetary Laboratory.

By creating a complete picture of how heat circulates in the atmosphere of Saturn, scientists can better understand how auroral electric currents heat the upper layers of the planet’s atmosphere and drive winds. The global wind system can distribute this energy, which is initially deposited near the poles to the equatorial regions, heating them to twice the expected temperatures only by the Sun’s heating alone.

The new data offers essential information in our general understanding of upper planetary atmospheres and are an important part of Cassini’s legacy. The data gathered by Cassini is helping astronomers finally understand why the highest parts of the atmosphere of Saturn is so hot, while the rest of the atmosphere, due to the great distance from the Sun, is cold.

Cassini was a NASA spacecraft that observed and studied Saturn for more than 13 years before running out of fuel, and eventually falling towards the planet of the rings, where it burned in its atmosphere in September 2017, in part to protect its moon Enceladus, which Cassini discovered could contain conditions suitable for life.

But before the spacecraft was deorbited, Cassini made 22 ultra-close orbits around Saturn. It was during Cassini’s Grand Finale that key data was collected for Saturn’s new temperature map of the atmosphere. For six weeks, Cassini pointed at several bright stars in the Orion and Canis Major constellations as they passed behind Saturn.

As the spacecraft watched the stars rise and fall behind the giant planet, the scientists analyzed how the light from the stars changed as it passed through the atmosphere. Measuring how dense the atmosphere gives scientists the information they needed to find temperatures. Density decreases with altitude, and the rate of decline depends on temperature. They found that temperatures peak near auroras, indicating that auroral electrical currents heat the upper atmosphere.

As revealed by the University of Arizona, “understanding Saturn’s upper atmosphere, where planet meets space, is key to understanding space weather and its impact on other planets in our solar system and exoplanets around other stars.”