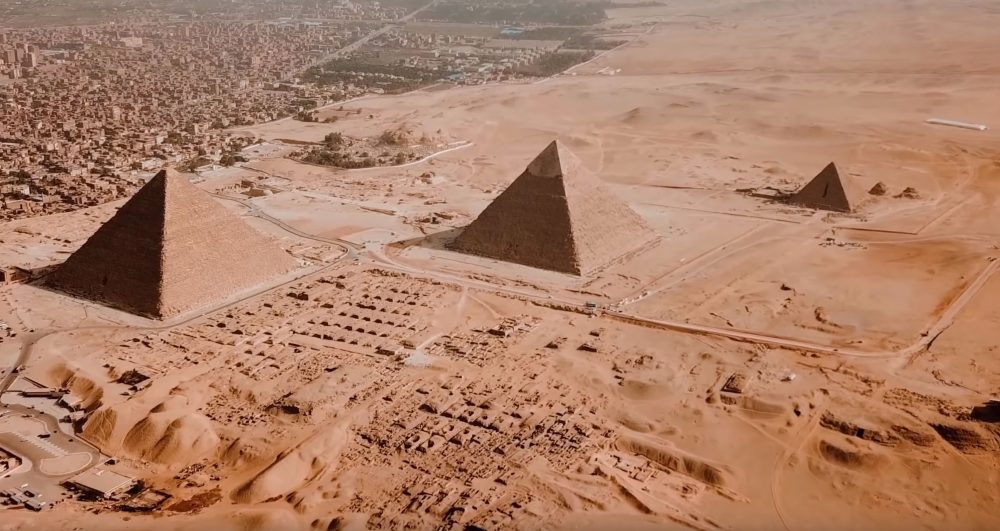 This stunning aerial video of the ancient Pyramids at Giza are hypnotic.

Seeing the pyramids from the air is an incredible experience that not many people have had a chance to see. Thanks to this stunning aerial video of the Giza Plateau, here’s your chance to see the ancient Pyramids from a totally different perspective.

For thousands of years, the Pyramids of Egypt have captured the imagination of visitors from afar. Even during times of the Old Kingdom, people in Egypt were left awestruck by the majestic pyramids, especially those built by Sneferu, Khufu, Khafre, and Menkaure. In fact, these four Pharaohs of Egypt’s Fourth Dynasty are believed to have been responsible for building the most massive Egyptian Pyramids.

Sneferu, for example, is responsible for creating three massive pyramids; one at Meidum, and two at the Royal Necropolis at Dahshur. Sneferu is thought to have laid down the foundations for the construction of the Great Pyramid of Giza.

His son Khufu built the Great Pyramid of Giza, the most massive and complex of all ancient Egyptian pyramids. Sneferu’s Grandson followed the footsteps of Khufu, although he built a much smaller pyramid at Giza, nonetheless still majestic in all forms.

Menkaure marked the end of the massive Pyramid building in Egypt and signaled the end of ancient Egypt’s Pyramid golden age.

If we ask Egyptologists, they’d probably conclude that the truly gigantic stone pyramids in Egypt were built over the course of only three generations: Sneferu, Khufu, and Khafre. Sneferu’s pyramids alone feature more than 3.5 million cu. meters (124 million cu- ft) of stone. This means that all other ancient Egyptian pyramids combined–excluding of course the Queens’ pyramids and satellite pyramids–contain only 41 percent of the total mass of the pyramids of Sneferu, his son Khufu and grandson Khafre.

Although Menkaure still used massive, multi-ton stones in the construction of his pyramid at Giza, the total mass was less than that of the pyramid of Djoser, considered ancient Egypt’s first true stone pyramid.

The first ancient Egyptian pyramids that would appear starting with Djoser were experimental in more ways than one, and standardization of Pyramid building would not happen until the reign of Pharaoh Sneferu.

While some of these structures were monumental in size and revolutionary in terms of design, they do not approach the scale and complexity of pyramids that suddenly emerge during the Fourth Dynasty, after the unsuccessful pyramid at Meidum. This pyramid is considered Egypt’s first (unsuccessful attempt) at creating a revolutionizing smooth-sided pyramid, marking a departure from stepped-pyramids introduced by Djoser.

The Bent Pyramid of Sneferu can be regarded as the structure that finally standardized the construction of a smooth-sided pyramid, and laid down the necessary steps for future Pharaohs; Khufu, Khafre, and Menkaure, to build their pyramids. The bent pyramid, so-called because it was built with two distinctive angles, is a kind of transitional pyramid that shows clearly shows the history of step pyramids combined with revolutionary smooth-sided structures.

Of those four pyramids, the Great Pyramid of Giza, believed to have been built around 4,500 years ago is the most complex and majestic one.

Egyptologists have calculated that the ancient builders of the pyramid made use of around 5.5 million tons of limestone, 8,000 tons of granite (from Aswan), and more than 500,000 tons of mortar to build the Great Pyramid. While most of the stones came from quarries that are located relatively close to the Pyramid, some of the stones came from quarries located as far away as Aswan, some 800 kilometers from the construction site.

Some of the casing stones used in the construction of the pyramid (at its base) weigh as much as 15 tons. The large granite beams that make up the rook of the King’s Chamber inside the pyramid and the stress-relieving chambers above it have been estimated to weigh between 50 to 80 tons. Such massive stones never cease to astound experts who are left awestruck by the capabilities of the builders of the pyramid.

Featuring unmatched precision, the Great Pyramid of Giza is one of the most accurate structures on the surface of the planet, bearing evidence that its builders were highly skilled astronomers, engineers, architects, bust most of all mathematicians.

The base of the Great Pyramid is level to within just 2.1 centimeters. The structure’s average deviation of its sides from the cardinal directions is 3′ 6” of arc, and the largest difference in the length of the pyramid’s sides is 4.4 centimeters. The Pyramid was aligned to true north.

Furthermore, the ratio of the perimeter to height of 1760/280 Egyptian Royal cubits equates to 2π to an accuracy of better than 0.05 percent.

This pyramid is also the only standing eight-sided pyramid ever built in ancient Egypt. This curious yet relatively unknown feature was first mentioned in La Description de l’Egypte in the late 1700s by Sir William Matthew Flinders Petrie, an English Egyptologist and a pioneer of a systematic method in archaeology and preservation of artifacts.

I. E. S. Edwards, an English Egyptologist considered to be a leading expert on the pyramids wrote: “In the Great Pyramid the packing-blocks were laid in such a way that they sloped slightly inwards towards the center of each course, with a result that a noticeable depression runs down the middle of each face — a peculiarity shared, as far as is known, by no other pyramid” (The Pyramids of Egypt, 1975, p. 207).

The numerous unique characteristics of the pyramid, as well as the excellent workmanship with which the pyramid was built,  have made it possible for the pyramid to stand the test of time. Today, this majestic monument is the oldest of the Seven Wonders of the Ancient World, and the only one to remain largely intact.

Seeing the pyramids up close is a stunning feeling. Seeing them from the air is even more. Despite this, not everyone has had a chance to see the majestic pyramids from the air.

Thankfully there are people out there who have taken their time and put in great effort to film the pyramids from the air, producing stunning aerial videos of the ancient Pyramids.