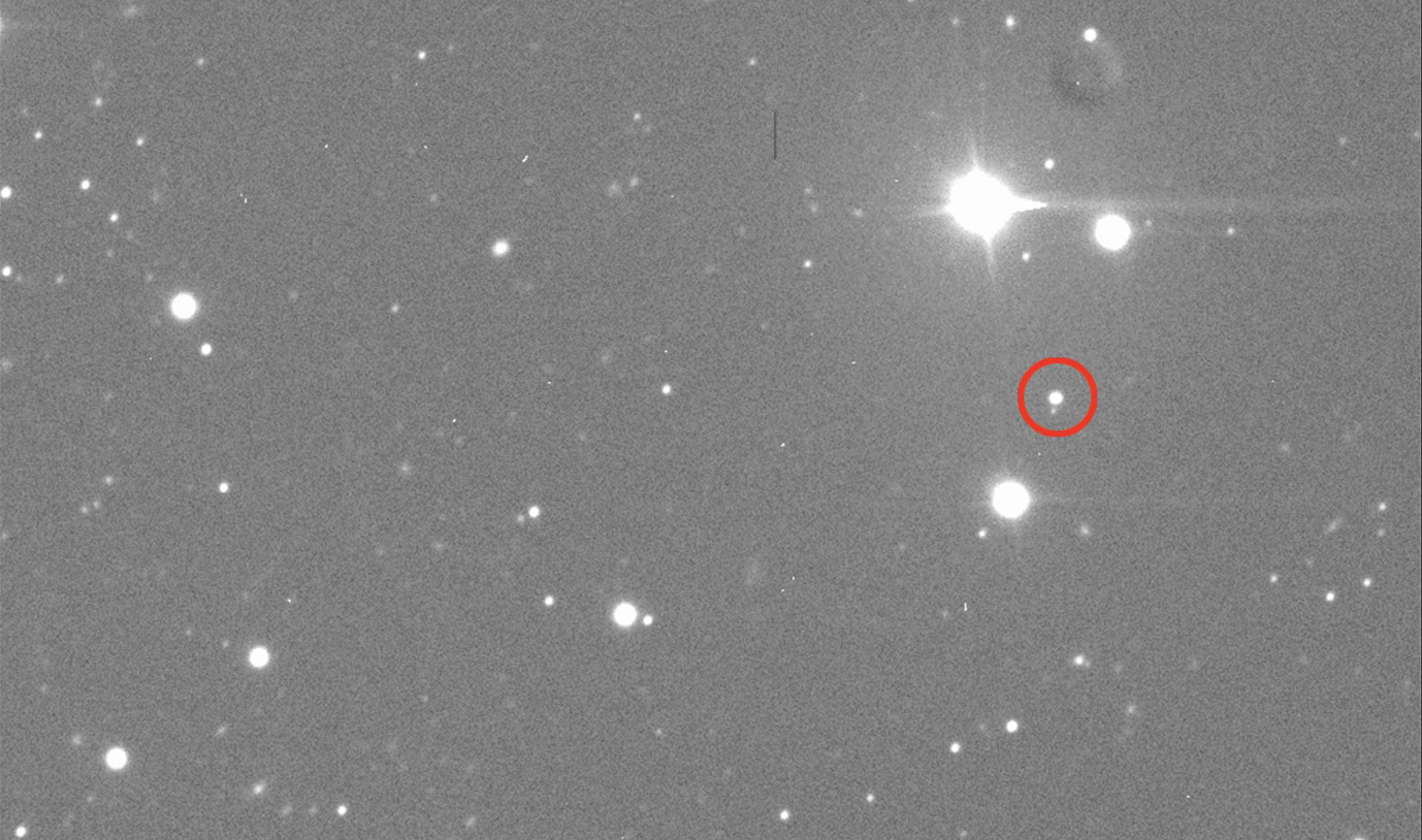 Seen in this image, and circled in red, is asteroid Dimorphos, the target of the DART mission, which is expected to impact the space rock on September 26, 2022.

DART is the first planetary defense mission to deliberately alter the motion of an asteroid called Dimorphos in space by executing a kinetic impact.

Aside from the fact that neither asteroid poses a threat to Earth, the DART mission will demonstrate that a spacecraft can navigate autonomously to a relatively small target asteroid. This technique could potentially be used to deflect an asteroid from colliding with Earth if one were found. The DART program is scheduled to reach its target on September 26, 2022.

A six-night observation campaign was completed last month by the DART investigation team using some of the world’s most powerful telescopes to verify earlier calculations of Dimorphos, DART’s target asteroid, around its larger parent asteroid, Didymos, confirming where the asteroid will be at impact.

The DART mission is the first attempt in the history of mankind to change the speed and path of an asteroid in space. DART tests a method of asteroid deflection that may prove useful if the planetary defense is ever needed.

According to Andy Rivkin, co-leader of the DART investigation team at the Johns Hopkins University Applied Physics Laboratory (APL) in Laurel, Maryland, the measurements made in early 2021 played a crucial role in ensuring that DART arrived at the right place and time for its kinetic impact on Dimorphos. “Confirming those measurements with new observations shows us that we don’t need any course changes, and we’re already right on target.”

Although DART’s impact is important, understanding the dynamics of Dimorphos’ orbit is also crucial. By modifying Dimorphos’ path, DART could reduce its orbital time as the moonlet moves closer to Didymos.

In order to measure that change, scientists must confirm that there is nothing else affecting the orbit besides the impact. Sun-warmed asteroid surfaces can have subtle forces acting on them, including radiation recoil, which can gently push and shift the asteroid’s orbit.

According to Nick Moskovitz, co-leader of the July observation campaign and astronomer at Lowell Observatory in Flagstaff, Arizona, “this experiment requires an in-depth knowledge of the asteroid system before we do anything to it.”

“We don’t want to, at the last minute, say, ‘Oh, here’s something we hadn’t thought about or phenomena we hadn’t considered.’ We want to be sure that any change we see is entirely due to what DART did.”

Didymos and Dimorphos will have their closest approach to Earth in recent years around the time of DART’s impact in late September or early October.

They are approximately 6.7 million miles (10.8 million kilometers) away from our planet. It has been difficult for ground-based telescopes to observe Didymos since March 2021 due to its distance from Earth, but the DART Investigation Team used powerful telescopes in Arizona and Chile early this summer.

In order to observe the asteroid system and look for changes in brightness, the Lowell Discovery Telescope at Lowell Observatory, the Magellan Telescope at Las Campanas Observatory, and the Southern Astrophysical Research (SOAR) Telescope were used. Known as “mutual events,” these changes occur when asteroids pass in front of one another due to Dimorphos’ orbit, blocking some of their light.

“It was a tricky time of year to get these observations,” explained Moskovitz. In the Northern Hemisphere, the nights are short, and it is monsoon season in Arizona. In the Southern Hemisphere, the threat of winter storms loomed. In fact, just after the observation campaign, a snowstorm hit Chile, prompting evacuations from the mountain where SOAR is located.

The telescope was then shut down for close to ten days. “We asked for six half-nights of observation with some expectation that about half of those would be lost to weather, but we only lost one night. We got really lucky.”

As a result of the analysis, the team was able to determine the timings of 11 new mutual events. As a result of analyzing those brightness changes, scientists could predict Dimorphos’ location as it orbits the larger asteroid, including its location at the moment DART impacts. Previous calculations were confirmed by the results.

As a result of understanding the asteroid system, Moskovitz said, “we have a high degree of confidence in our ability to explain what happens after impact.”.

In addition to confirming Dimorphos’ orbital period and expected location at the time of impact, this observation campaign allowed team members to improve the methodology that will be used to determine whether DART successfully altered Dimorphos’ orbit post-impact, and how much.

Dimorphos’ orbit will be calculated in October using ground-based telescopes around the world, and the team expects that the time it takes for the smaller asteroid to orbit Didymos will have shifted by several minutes. The observations will also help constrain theories about Dimorphos’ orbital dynamics and its rotation that scientists have put forward around the world.