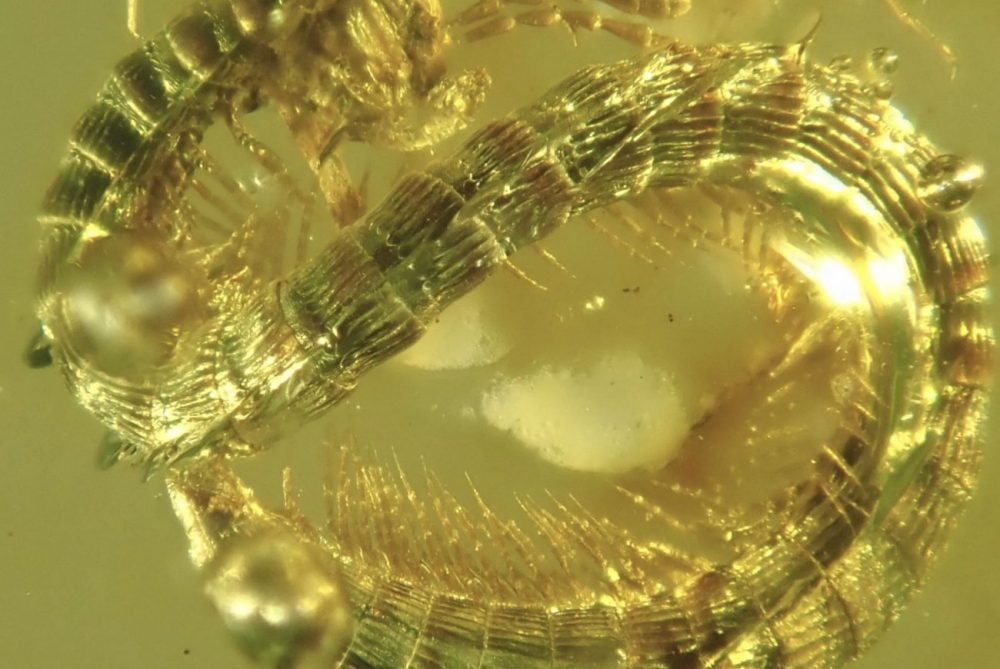 The recently-discovered creature was so strange, scientists had to create an entirely new suborder of the species.

Scientists have come across a tiny millipede of around 8.2 millimeters in length, perfectly preserved in Cretaceous-era amber in Myanmar.

Revealing a creature that co-existed with Dinosaurs

Using 3D X-ray microscopy, the scientists were able to construct a virtual model of the 0.3-inch-long specimen, which allowed them to fully understand its skeleton, its unusual internal anatomy as well as its healthy abundance of tiny legs.

The findings appear in the open-access journal ‘ZooKeys’.

In fact, the 99-million-year-old millipede was so unusual that scientists were forced to create an entirely new suborder in the current tree of millipede classification, Pavel Stoev, a researcher at Bulgaria’s National Museum of Natural History and the study’s lead author, revealed in a statement.

“With the next-generation micro-computer tomography (micro-CT) and the associated image rendering and processing software, we are now able to reconstruct the whole animal and observe the tiniest morphological traits which are rarely preserved in fossils,” said Stoev.

Given the surprising revelations made after scientists studied the creature, they decided to name it Burmanopetalum inexpectatum, with the latter word translating into “unexpected” in Latin.

“It came as a great surprise to us that this animal cannot be placed in the current millipede classification,” Stoev revealed in a statement.