It was a terrible day for millions of people around the globe, who watched as the massive fire nearly consumed a Cathedral that had remained standing, survived world wars, civil wars, earthquakes, and fires.

Perhaps the only comfort in this historic tragedy is that the cathedral did not burn to the ground.

Now, a woman says that in the midst of the raging fire, she notched something in the flames, turning to social media to ask people whether they too could see the image of Jesus Christ in the fire of the Cathedral.

Can you see the image of Jesus?

“When I looked at this photo last night, I was really astounded by what I saw,” 38-year-old Lesley Rowan said an in an interview with Scotland’s Daily Record.

“When I look at it I see a silhouette of Jesus. I really see a vivid image.”

“I feel like it will bring comfort to people in Paris and all over the world at this sad time,” Rowan added.

The woman, Lesley Rowan from Scotland was one of the many millions of people watching as the fire nearly consumed the historical Cathedral. But in the middle of the raging fire, the woman claimed to have seen the image of Jesus, interpreting it as a sign of hope.

Wow, I totally agree – I can see a figure of Jesus in the flames too. Do you see it, or is my mind playing tricks on me?#NotreDameFire #NotreDame pic.twitter.com/9NWm1q0gDj

Although some people find the image inspirational and a sign of comfort, it is very likely that this is just an example of pareidolia and not a message from God. Although you have to say that a miracle took place for the cathedral not to burn to the ground.

Colossus: The Mini Firefighting Robot That Helped Save the Notre Dame

This is the World’s Oldest Continually Operating Library, Where Lost Languages Have Been Found 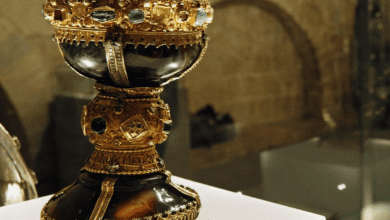