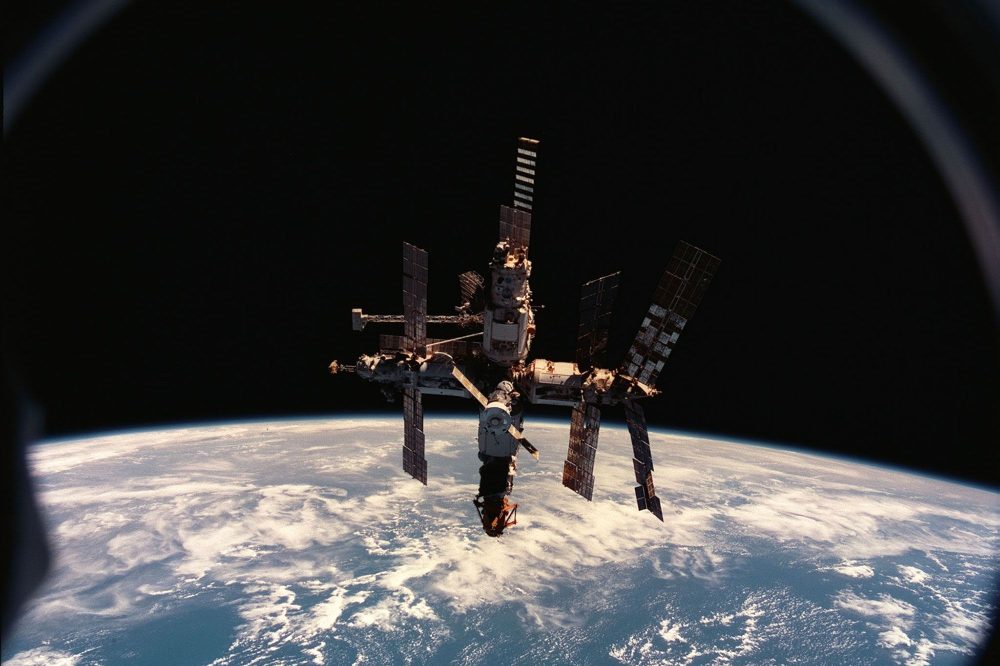 One of the greatest achievements in cosmonautics!

The creation of the Mir orbital station was one of the most successful space ventures of the past century and is among the top achievements of the USSR’s cosmonautics. Mir was the first permanently inhabited space station. It was also the first station of the so-called “third-generation” – stations of this type are continuously built for years by adding modules.

The date of birth of the complex is considered to be February 20, 1986, when the main module was launched into orbit by a Proton launch vehicle. In the following years, the modules “Kvant-1”, “Kvant-2”, “Kristall”, “Spektr” and “Priroda” were added to it. In this configuration, “Mir” lasted until March 23, 2001, when it was taken out of orbit and immersed in the Pacific Ocean.

Differences from other Soviet orbital stations

It is a well-known fact that the specialists of the USSR gained extensive experience with the operation of orbital stations in the 70s of the last century. But plans to create Mir provide for a completely different type of construction.

The main module was very similar to the single-module stations “Salyut 6” and “Salyut 7”, but unlike them, it is not equipped with scientific tools and instruments (the scientific tools are planned to be mounted later on the additional modules).

Instead of equipment, the main module was equipped with two comfortable cabins for the crew members, each of which had a window with a beautiful view of the Earth. But the most important feature of the main module were the six docking ports with the Soyuz manned ships and the modules to be brought out later.

Mir’s main module was launched by the Proton rocket on February 20, 1986, after several days of delay, as telecommunications problems arose during the initial launch attempt on February 16. The fate of “Mir” hung in the balance until the very start day, because the work on the station was constantly lagging behind the schedule.

In addition, in the 1980s, the main priority for Soviet cosmonautics was the creation of the Buran spacecraft, which must prove to the world that Soviet space technology has not lagged behind that of NASA.

The first manned spacecraft on a mission to Mir was the Soyuz T-15, which was launched on March 13, 1986. The connection with the station was successful two days later. During their stay on board, cosmonauts Leonid Kizim and Vladimir Solovyov turned on the main systems and unloaded two cargo ships – “Progress 25” and “Progress 26”.

On May 5, Soyuz T-15 disconnected from Mir and docked with Salyut 7, becoming the first manned spacecraft to visit two different orbital stations. The astronauts loaded Soyuz T-15 with scientific instruments from Salyut 7, after which the ship returned to Mir on June 26. On July 16, 1986, the crew returned to Earth, leaving Mir unmanned until February 5, 1987, when the second expedition with cosmonauts Yuri Romanenko and Alexander Laveykin took off.

Initially, the “Kvant-1” module was designed as a demonstration for further modules to be launched at Mir. According to the plan, this demonstrator should be tested on “Salyut 7”. Subsequently, however, “Kvant-1” was adapted for the installation of “Mir” due to technical problems that delayed its flight and so it became hopeless to be installed on an outdated station such as “Salyut 7”.

“Kvant-1” was equipped with scientific instruments for astronomical observations – in particular observations of the universe in the X-ray and ultraviolet regions of the electromagnetic spectrum. In addition, the module houses six gyroscopes, which are necessary for the orientation of “Mir”.

The “Kvant-1” was launched on March 31, 1987, using the Proton-K missile. But even during the convergence between the main module and “Kvant-1”, an unknown problem occurred, which threatened the further construction of “Mir”.

Romanenko and Laveykin had to go into space urgently to find out the problem. It turns out that a bag of garbage is stuck between the modules, which prevents jumping. After the bag was removed, “Kvant-1” was attached on April 27th.

Between 1987 and 1989, the first international visitors arrived aboard the Peace, including astronauts Mohammed Faris, Abdul Ahad Mohmand, and Jane Lope Hretien. The Bulgarian Alexander Alexandrov also visited the station during his mission with the Soyuz TM-5 in 1988.

On the other hand, after the Soyuz TM-7 was disconnected on April 27, 1989, the station was again left in unmanned mode and this continued until the launch of the Soyuz TM-8 on September 5, 1989.

On November 26, 1989, the “Kvant-2” module took off. This was the first module whose design was based on that of the ship “TKS”, designed to serve the former Russian military station “Almaz”. Since the Almaz project was abandoned in 1981, the management of the Salyut Design Bureau was able to persuade the authorities to use the rest of the hardware for the Salyut 7 and Mir stations.

Like the “Kvant-1”, the “Kvant-2” was also equipped with gyros for the orientation of the “Mir”, but in the second additional module, they were mounted on the outside. Subsequently, this turned out to be a wrong constructive decision, because, in the event of a gyroscope failure, the astronauts had to go into outer space to carry out the repair work.

On May 31, 1990, the “Kristall” module was launched. Among the most important features of “Kristall” were the systems designed to dock with the Russian space shuttle “Buran”. Unfortunately, the docks with the Buran never took place because the shuttle stopped flying after only one flight, but later the lateral port serves as the dock between the Mir and the American space shuttles.

Spectrometers, cameras, and instruments for studying cosmic radiation were also installed onboard the “Kristall” making it one of Mir’s most important research modules.

The collapse of the USSR and the fate of “Mir”

The collapse of the Soviet Union dealt a serious blow to Russia’s space program. Many important projects, including the Buran space shuttle, were doomed. Mir’s future was also in jeopardy because more modules were waiting on Earth, but the Russians did not have the means to launch them into orbit.

In September 1993, US Vice President Al Gore and Russian Prime Minister Viktor Chernomyrdin announced their joint plans to build a new International Space Station. Before that, however, an agreement was signed, which provided for the completion of the construction of “Mir” with American help.

This gave the necessary experience to the United States and Russia to make the ISS. Gore and Chernomyrdin also agreed that American shuttles would fly and dock with Mir.

The first flight of an American shuttle with a Russian cosmonaut (Sergei Krikalyov) took place on February 3, 1994, when the Discovery was launched. Although the shuttle never docked with Mir, the mission laid the groundwork for future US-Russia cooperation. A year later, “Discovery” took off again, there was no docking again, but the shuttle made a complete flight of “Mir”.

On March 14, 1995, the Soyuz TM-21 spacecraft was launched. For the first time in human history, an American astronaut flew aboard a Russian ship, Norman Taggart.

On June 27, 1995, the Atlantis shuttle took off, this time aiming for a real docking with the Mir. It was successfully implemented on June 29. Atlantis returned astronaut Taggart to Earth and delivered Russian cosmonauts Anatoly Solovyov and Nikolai Budarin aboard the Mir.

It is interesting to know that the “Spektr” module was designed as part of a top-secret military program codenamed Oktant. Spectrum was launched into space on May 20, 1995, and the construction of Mir was resumed.

A number of important scientific instruments are attached to the module, including an optical telescope, an interstellar gas detector, and several spectrometers. After the attachment, “Spektr” became the main residential module of the Mir, and this continued until June 1997, when the crash between the station and the Progress M-34 occurred.

On April 23, 1996, the last module took off – “Priroda”. Onboard are scientific instruments designed by 12 different countries. After the launch, there were problems with the power supply of “Priroda”, but nevertheless on April 26, 1996, the docking was successful and the construction of the magnificent station “Mir” was completed!

Mir station got old and dangerous; Fire onboard and cargo shipwreck

Over the years, the Mir orbital station began to age and became life-threatening for astronauts and astronauts.
The first real incident occurred when, on February 23, 1997, one of the oxygen generators was damaged. The oldest module was affected: “Kvant-1”. The entire station was filled with poisonous smoke, but fortunately, the astronauts were able to control the fire and the life support systems aboard the Mir purified the air.

The real test, however, came only a few months later. After a failed docking on June 25, the Progress M-34 cargo spacecraft crashed into the Spectrum module, damaging one of its solar panels. The module itself had been breached and Mir was in danger of depressurization.

Thanks to the timely intervention of the crew, “Spektr” is isolated from the station, which controls the air leak, but the module remains uninhabited forever. Later, however, after a “spacewalk” conducted by cosmonauts Pavel Vinogradov and Anatoly Solovyov, the operability of some of Spektr’s solar panels was restored.

Following the increase in accidents and the progress of the construction of the modules of the International Space Station, there were no funds left for the maintenance of Mir. Private sponsors were being sought, and one option being considered was for Mir to be transformed into an orbital television studio.

Commercial companies raised funds, and on April 4, 2000, the Soyuz TM-30 spacecraft was launched with cosmonauts Sergei Zalyotin and Alexander Kaleri, who needed to repair and improve the safety of the obsolete station.

But while the astronauts stabilized Mir’s atmosphere and serviced the hardware, the Soyuz TM-30 was not followed by other ships, and its mission was the last to reach the orbital station. There was no other choice left – “Mir” must be taken out of orbit.

The procedure was performed in three phases. The first phase was a passive wait for the Earth’s atmosphere to slow down the speed of Mir and reduce the average height of the orbit to about 200 kilometers above Earth. The second phase involved the docking of a Progress M-1.5 ship loaded with fuel to carry out the necessary maneuvers.

The orbital parameters changed, as after the completion of the procedure the orbital perigee was 165 kilometers and the apogee – 220 kilometers. The last phase involved a long start of the Progress M-1.5 engines for over 22 minutes. On March 23, 2001, the station entered the dense layers of the atmosphere and burned forever. A small part of the fragments reached the bottom of the Pacific Ocean.