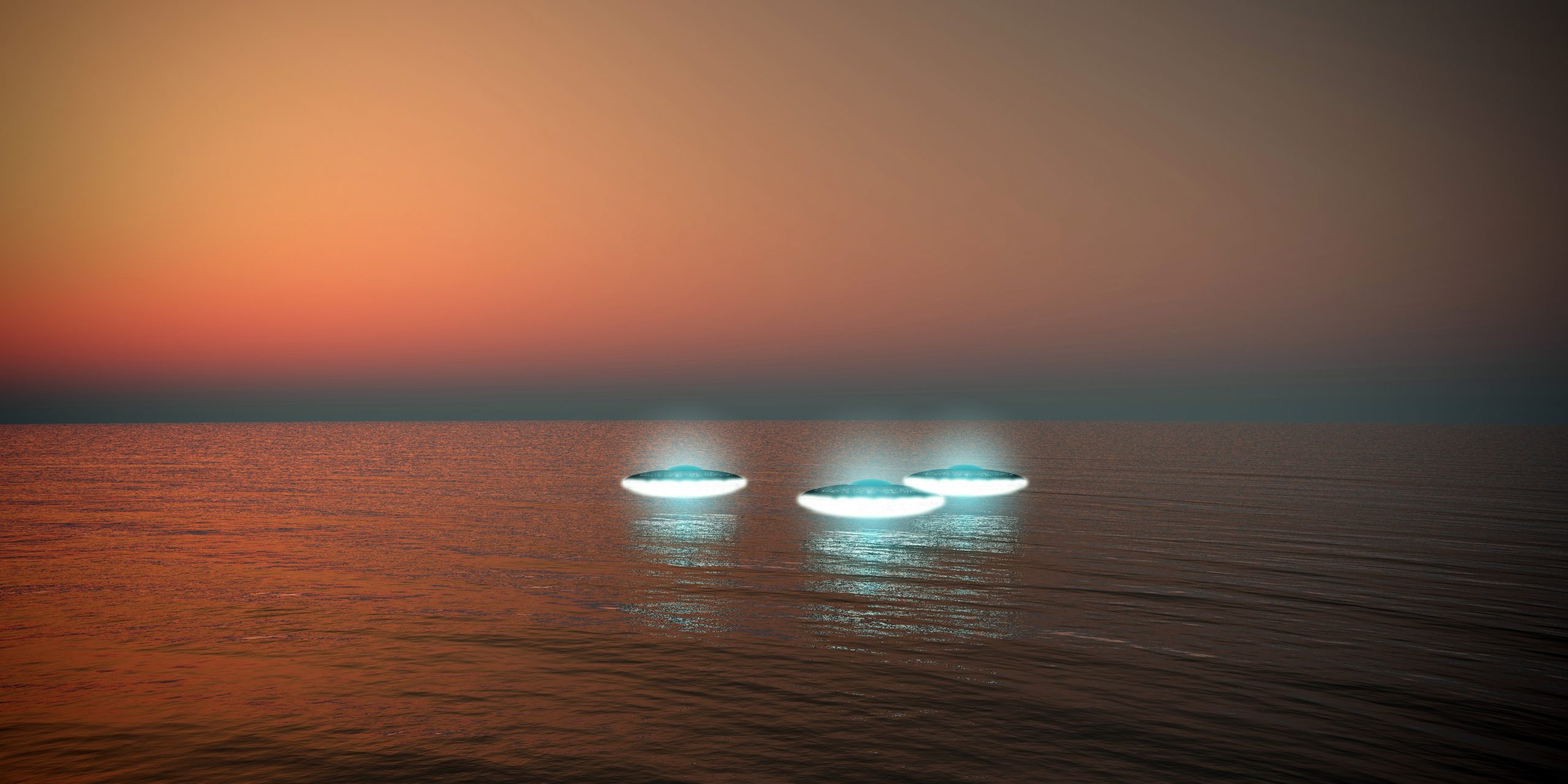 Transmedium UFOs appear to be extremely intelligent high-tech systems with unknown means of propulsion. These objects do not seem to have rotors, they do not possess wings like traditional airplanes or drones, and they do not have blades as our helicopters do. In other words, they do not have any human aircraft characteristics.

Warships of the US Navy were surrounded by swarms of transmedium UFOs while in restricted waters near San Diego. In July 2019, the crew spotted an assortment of strange vehicles some 100 miles at sea. Moreover, they were too far at sea for drone technology to be responsible.

Due to their ability to travel through air and water, some have called these objects “transmedium UFOs.”

Official reports may refer to them as drones and unmanned aerial vehicles. Mystery Wire reports that Pentagon investigators may use other terms behind the scenes.

After investigative filmmaker Jeremy Corbell posted a video of one of the UFOs on Instagram, it went viral. According to Corbell, now is the time for the government to reveal all the truth about what has been happening.

According to a Pentagon spokesperson, US Navy personnel aboard the littoral combat ship USS Omaha recorded the video.

“I can confirm that the referenced photos and videos were taken by Navy personnel,” Pentagon spokesperson Susan Gough said in a statement to the Black Vault.

As you may recall, the Department of Defense announced the UAP Task Force on August 4, 2020. Gough confirmed that the Task Force has considered these incidents during its ongoing investigation.

The video shows sailors discussing the spherical craft during the dive, and they are heard remarking, “It splashed!” as it dove into the sea. Following that, a Navy submarine searched for the object without finding any evidence of it.

Though the crew says the UFO “splashed,” Corbell clarifies that it slipped effortlessly into the sea. The splash would, therefore, not actually occur.

Corbell describes the Navy’s video on YouTube as having been taken at 11 p.m. PST on July 15, 2019. Take a look at the video below:

Transmedium UFOs appear to be extremely intelligent high-tech systems with unknown means of propulsion. These objects do not seem to have rotors, they do not possess wings like traditional airplanes or drones, and they do not have blades as our helicopters do. In other words, they do not have any human aircraft characteristics. In addition, they have no exhaust that is visible in the numerous UFO videos filmed by the military.

Despite this, these objects can travel at incredible speed, achieve unimaginable heights in seconds, and disappear in one location only to reappear in another.

The evidence is there

The 2004 Tic Tac UFOs have also been reported in the same general area as these UFO encounters. In April 2013, a similar transmedium UFO was filmed buzzing near the Aguadilla, Puerto Rico airport. The UFO went straight into the ocean after passing by the airport. It appeared to split into two disappearing vehicles after entering the water. Below is a video of the event.

In one of the most recent videos, a spherical craft is shown. Strange vehicles, however, were reported in a variety of forms. For example, night-vision cameras recorded UFOs in the shape of triangles or pyramids flashing in the clouds aboard the USS Russell in July 2019.

Over a period of years, sightings were reported daily in Virginia, according to the Independent.

In General, these types of UFO sightings occur on a widespread basis, but people tend to be very skeptical when seeing such events because UFOs were considered no more than a whack conspiracy theory a few years ago,

Things have changed now, with the military, governments, and space agencies such as NASA putting all their cards on the table in an effort to crack the mystery of the UFO phenomenon and find out whether these objects are a technology that comes not from this planet.

The Pentagon seems to have special eyes set on the enigmatic objects, and the recent renaming of its UFO office is evidence of that.

Officials at the Pentagon have renamed and expanded the government’s UFO office. Instead of Airborne Object Identification and Management Group, it will now be called the All-domain Anomaly Resolution Office, or AARO. Defense News reports that the updated name comes with increased responsibilities, according to a statement released by the Defense Department. Previously, the team focused on airborne threats, but it will now study objects submerged in water or described as “transmedium.”