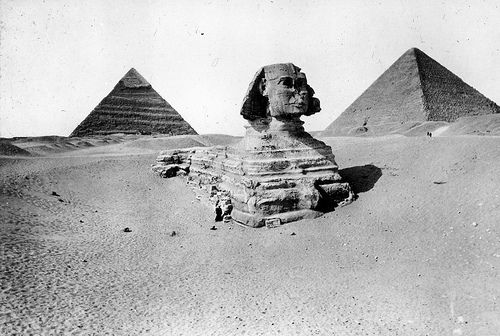 Some of these images were taken more than one hundred years ago.

The most fascinating and well-known pyramids are, without a doubt, those located at the Giza pyramid complex, just at the outskirts of Cairo, Egypt.

The archaeological site features the pyramids of Khufu/Cheops, Khafre/Chephren, and Menkaure/Mykerinos. Still, it is also home to the Great Sphinx of Giza and several cemeteries, a workers’ village, and an industrial complex.

The Great Pyramid of Giza is by far the oldest of the ancient Wonders of the world and the only one still in existence.

Many scholars consider the pyramids at the Giza complex as the most incredible ancient monuments ever built on Earth. In more controversial sciences, other experts argue that the pyramids are not only that but are the last standing evidence of a long-forgotten history.

The exact means by how the Great Pyramid was built remains an enigma despite the fact we have found a document that indicates the use of massive ramps and paid labor used to drag massive blocks of stone towards the pyramid.

But despite this, we still don’t really know how the pyramid was built.

We know that the Great Pyramid is made out of over 2 ½ million blocks of limestone, weighing from 2 to 70 tons each.

Nonetheless, the great pyramid of Giza is a monstrous, massive structure. Experts estimate that as many as 5.5 million tons of limestone, 8,000 tons of granite (imported from Aswan), and 500,000 tons of mortar were used in the construction of the Great Pyramid.

In other words, the Great Pyramid is, without a doubt, a wonder of ancient engineering.

And this article is meant to show the reader what the Great Pyramid and the surrounding area looked like in rare ancient images, some of which were taken more than one hundred years ago.

Traveling back in time