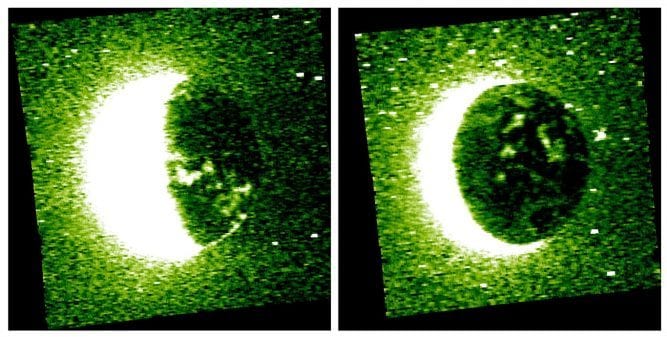 UAE's Hope probe, which had been silent on Mars for months, finally sent its first scientific result - unique images of auroras in the planet's atmosphere.

The United Arab Emirates’ Mars Science Probe Hope has finally sent its first scientific results – photographs of auroras that appear on the planet’s nighttime side.

The probe was sent to Mars almost simultaneously with the American and Chinese rovers in the launch window in July 2020, and in February 2021, all three spacecraft reached their target.

And now, after a long time, the leadership of the mission announced the first scientific results of the mission, which allowed the UAE to join the club of space powers that launch interplanetary vehicles. Scientists have shown photographs of auroras on the planet, taken in the ultraviolet range.

Auroras filmed on Mars are of the same nature as auroras on Earth. When streams of protons and electrons from the Sun reach our planet, its magnetic field deflects particles, forcing them to bend around the Earth. When particles collide with atoms and molecules in the Earth’s atmosphere, they cause auroras, usually seen in the northern or southern polar latitudes.

The same phenomenon is observed on Mars. However, due to the weakness of the planet’s magnetic field, it is observed not only in polar but also in temperate and equatorial latitudes.

Some areas on the planet’s surface, frozen several billion years ago, retained residual magnetism. If the earth’s magnetic field looks like a large magnet, then on Mars it looks like if you take a bag of magnets and scatter them on the surface of the planet. And they all look in different directions and have different strengths.”

An artist’s impression of how Mars’ discrete aurora might be viewed from different views including the surface of Mars when the emissions of light from the fleeting phenomenon extend into the visible spectrum as predicted by theory. pic.twitter.com/vuSnkJt07B

These magnetic field bunches act like lenses and attract charged particles, which cause a glow to collide with the atmosphere. Other orbital probes have previously also recorded auroras on Mars, but the Arab vehicle, having a high orbit, was able to photograph the entire night region of Mars for the first time.

Photographing atmospheric auroras is not the mission’s main focus. The main purpose of the $200 million spacecraft is to study the Martian climate and weather. Scientists will try to find an answer to the main question – why did the planet almost lost its entire atmosphere.

Globally, with this project, the country’s authorities want to attract young people to high-tech production and thereby reduce the country’s dependence on hydrocarbon exports.