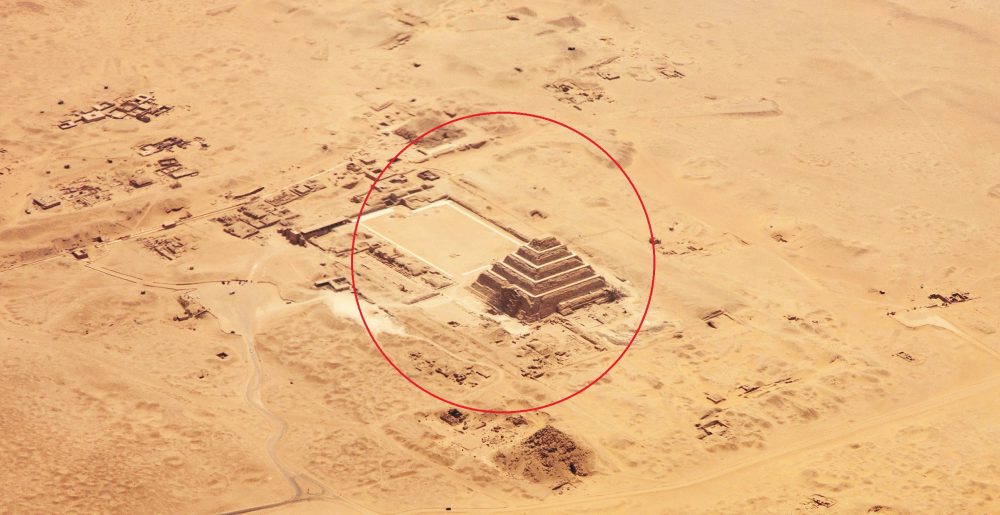 More than 4,700 years ago, the ancient Egyptians built an extensive underground labyrinth beneath their oldest pyramid, the Step Pyramid at Saqqara.

Egypt, the land of Pharaohs and golden sands is probably most famous thanks to its pyramids. It is difficult to say exactly how many pyramids were built in ancient Egypt, but Egyptologists usually agree there were around 120 pyramids in Egypt.

Although many people believe the Great Pyramid of Giza is Egypt’s oldest pyramid, this is not the case.

Even though there are no written records that date back from the time the Great Pyramid was built—around 4,500 years ago—detailing the methods by which the pyramids were built, the mainstream chronology of Egypt tells us that Egypt’s first pyramid was erected at the royal necropolis of Saqqara, around 4,700 years ago.

This was during Egypt’s Third Dynasty when a man called Djoser ruled over Egypt.

The rule of King Djoser is well documented, although there are no records of how his step pyramid was built. Strangely, and for reasons we remain unsure, there aren’t any blueprints that were left behind by the builders of Egypt’s pyramids.

We do know that the Step Pyramid of Djoser was built during a time when the pulley and the wheel were not in existence in Egypt. Nonetheless, the Egyptians of the Third Dynasty erected a monument that forever changed Egypt and ancient Egyptian architecture leaving an imprint in the history of mankind and civilization

The construction project behind the Step Pyramid Complex was one of unseen proportions, and never before in the history of Egypt had such a massive project been attempted.

Although the Step Pyramid is regarded as the earliest colossal stone building in Egypt and the earliest large-scale cut stone construction in history, it is noteworthy to mention that even before Djoser, most likely during the Second Dynasty, a massive stone structure was built not far from where Djoser would erect his pyramid.

This structure is known as Gisr el-Mudir, also known as the Great Enclosure. As I’ve explained before, this is Egypt’s oldest known stone structure. It was built in a rectangular shape and measures 650 by 350 meters. The walls of the colossal structure consist of two outer double walls, constructed using roughly hews limestone, located 15 meters apart.

Gisr el-Mudir is like a big, rectangular box, made of double stone walls sitting in the desert. Inside it, archeological surveys have found absolutely nothing.

It was believed that the “Great Enclosure” was built after an initial structure had been erected in the middle, but no traces of any kind of pyramid, mastaba, or temple have been revealed so far. In other words, although massive, Gisr el-Medir is a mystery to us, and I would personally say it is one of the greatest ancient Egyptian mysteries that remain unanswered.

Although the Great Enclosure is a mystery, its shape was adopted by Djoser’s Step Pyramid Complex architects.

However, there was one massive difference. Before the pyramid was built, the builders worked on creating an underground world that is now one of the most unique subterranean structures in Egypt.

Surveys of Djoser’s pyramid reveal a complex labyrinth of underground chambers, tunnels, rooms, and magazines that stretches for nearly 5.7 kilometers in length.

This massive labyrinth is connected in turn to the central shaft of the Step Pyramid. This shaft is a seven-meter square structure carved into the bedrock to a depth of around 28 meters.

As revealed by Egyptologists, this labyrinth of tunnels was meant to serve as the king’s burial, his family’s burial, but most importantly the storage of goods and offerings. The entrance to the subterranean shaft was constructed on the north side of the Step Pyramid.

This was curiously one of the few trends that would remain throughout the pyramid building process of the Old Kingdom. A subterranean world of such epic proportions would never again be attempted in history. (A great collection of images, as well as a potential explanation as to the “why such a massive underground world” can be found here).

The exact purpose of the underground is debated, although experts believe that the chambers beneath the pyramid were meant to constitute the “funerary palace” and served as the living place for the Pharaoh’s Ka.

Just to the east of the pyramid, the builders craft eleven shafts 32 meters deep into the bedrock which were connected to the horizontal tunnels beneath the pyramid. It is believed that these were incorporated into the pre-existing structure as the entire complex expanded towards the east. Many of these subterranean storage rooms yielded stunning archeological discoveries.

The most important discovery, perhaps, is what experts never found; the mummy of Djoser was not there when archeologists entered the pyramid for the first time. What experts did discover in the storerooms were over 40,000 stone vessels, many of which—strangely—predate Djoser by several generations.

Their purpose, like many other things, is uncertain, although Egyptologists believe they may have served Djoser’s visceral needs in the afterlife.

A network of underground tunnels was built to the north, west, and south of the central shaft, in which horizontal magazines were carved by the pyramid builders.

The burial chamber where the Pharaoh’s mummy is said to have been placed was constructed of four courses of well-dressed granite, with only one opening which was sealed in ancient times with a 3.5 ton stone block. Despite protections in place after the Pharaoh’s burial, his mummy and most precious belongings are thought to have been looted thousands of years ago.

The social implications of building such a massive monument are beyond staggering. Djoser’s Pyramid complex would have been far more labor-intensive than any other previous construction project in history. It suggests that the royal state and the government had absolute power and control over not only material but human resources as well. Djoser’s Complex was truly gigantic: it covers 15 ha (37 acres) which means it is approximately 2.5 times as largest as the ancient city of Hierakonpolis.

The entire complex, and therefore the underworld bull out of bedrock beneath the pyramid, was surrounded by a massive wall of light Tura limestone, most of which remain standing today. The wall’s design is reminiscent of the 1st Dynasty tombs. It rises around 10.5 meters into the air.

The entire pyramid complex, beyond the massive enclosure wall, was surrounded by a trench that was dug into the bedrock measuring 750 m long and 40 m wide.