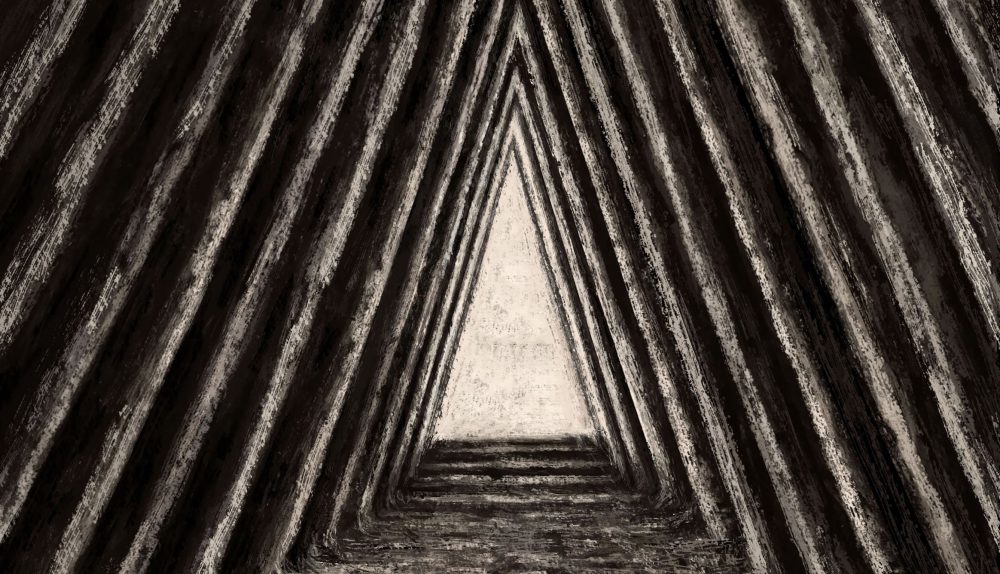 How and why did ancient builders around 4,600 years ago excavate 5.7 kilometers (3.5miles) worth of shafts, tunnels, chambers, galleries, and magazines around 28 meters beneath the first ancient Egyptian pyramid?

Around 4,600 years ago the builders of the oldest Pyramid in ancient Egypt excavated 5.7km worth of tunnels, chambers, shafts, and magazines, building a massive subterranean world beneath the pyramid.

The first ancient Egyptian pyramid is far more interesting than you are probably aware of. The Pyramid of Djoser is Egypt’s first stone pyramid.

Built during ancient Egypt’s third dynasty, between 2667–2648 BC, the stone structure was commissioned by Pharaoh Djoser. The first ancient Egyptian pyramid was designed, planned and built by his royal vizier and architect Imhotep, a man that would later be deified in ancient Egypt to the status of a God.

Its beginning was humble. Uncertain.

But Imhotep had envisioned a structure without precedents. The building that Imhotep had designed was revolutionary in numerous ways. The pyramid is central to the vast pyramid complex, which in terms of size is as big as a larger city during the 3rd millennium BC.

The Step Pyramid Imhotep built is a proto-pyramid and is considered the earliest large-scale stone-cut building in Egypt, and what lies beneath the Pyramid and the pyramid complex is even greater.

The Step Pyramid was revolutionary.

Never before in Egypt did a Pharaoh commission a building similar to the step pyramid designed by Imhotep. But not only that, never before was such a massive project attempted until Djoser.

Believed to have ruled for 19 years, Djoser lived long enough to allow his grandiose pyramid plan to be realized in his lifetime. While his pyramid dominates the landscape at Saqqara what lies beneath it completely dominates the underworld.

The pyramid of Djoser is unique not only because of its tremendous size for a 3 millennium BC “tomb” but because with the construction of the pyramid complex this building marks the end of an era, where ancient Egyptian architecture departs from one long-maintained style and enters a new, radical and revolutionary architecture. As such, the Pyramid of Djoser is widely recognized as the first monument structure made of stone.

The construction of the entire pyramid complex had great implications for ancient Egyptian society in the 3rd millennium BC. The process involved in building such a megastructure was far more labor-intensive, complex, and larger than any other monument in Egypt before it.

The successful completion of the underground world, the pyramid complex with its temples and of course the pyramid is indicative of a well-established royal government controlling resources; both in terms of material and human.

It suggests that already by the third millennium BC, ancient Egypt was capable–as a society–of building massive superstructures that were created in different phases throughout many years.

Although many “elements” persist and the pyramid of Djoser lays down the foundations for later, much bigger pyramids, the architecture, design, and construction elements are unique to Djoser.

But just as many other structures, the pyramid of Djoser had to draw precedents from somewhere.

And that somewhere is a mastaba located in Saqqara, cataloged as Mastaba 3038, which was built around 3,700 BC.

This structure is believed to have been almost designed and built as an elongated pyramid had the builders not left one of its sides uncovered.

Imhotep, who used royal cubits in its design, envisioned the Pyramid as having six steps which were assumed to have been built in six stages, as expected with an experimental building like the pyramid was.

The structure started off as a square mastaba which was then enlarged. It was built in two different phases, first in order to complete a four-stepped structure, then to form a six-stepped monument with a rectangular base positioned on an east to west axis.

A tell-tale sign that indicates the pyramid of Djoser was not initially designed as a mastaba is the initial square shape. There are no known mastabas that were built with a square shape.

The builders would begin to transform the mastaba into a four-step pyramid making major changes in the shape of the structure.

The core of the structure was built just as a mastaba would using rough stones which were then cased with limestone packing in between them.

However, the major difference that sets the mastaba apart form the pyramid can be seen in the layers of the building.

For a mastaba, the builders would lay down horizontal courses, but for the pyramid layers, they worked in accretion layers that leaned inwards while using blocks that were both more massive and of better quality.

However, it is widely accepted that ramps were probably used to raise the heavy stones to construct the pyramid, and many plausible models have been suggested although no physical evidence of said ramps has been found near the pyramid.

Egyptologists say that for transport, under the supervision of Imhotep, the builders of the pyramid complex used apparatuses like rollers to move the stones to their needed destination. Just as many other things, these too are no more than theories.

We have not discovered any text, hieroglyphics or apparatuses that back up the theory.

That what lies beneath the Pyramid and the entire pyramid complex of Djoser is perhaps even a greater accomplishment than the pyramid itself.

Beneath Djoser’s pyramid complex is a supermassive labyrinth of tunnel chambers, rooms, and galleries that totals 5.7 kilometers in length, all of which was connected to a central 28-meter-deep shaft whose entrance was built on the northern side of the pyramid.

In other words, beneath the enter pyramid complex, the builders constructed a massive subterranean world, a kind-of palace beneath the surface which would serve the Pharaoh in his afterlife.

But more than just a simple “room” beneath the pyramid, the superstructure beneath the ground was a city of its own.

What is perhaps mind-bending is not the size of the subterranean superstructure but the sole fact that to build such a vast underground network, the builders had to quarry or more than 5.7 kilometers worth of material.

It is truly mindboggling to think that more than 4,700 years ago, an unknown number of builders was sent out to the construction site where the Step pyramid would be built to excavate and remove—on a previously unknown scale—5.7 kilometers (3.5miles) worth of shafts, tunnels, chambers, galleries, and magazines.

Until the reign of Djoser, a construction project of this size was unheard of. Never before did ancient Egyptian builders participate in a project as big as the one commissioned by Djoser.

The central corridor of the stupefying subterranean world connects to more than 400 different rooms beneath the pyramid.

Just as the pyramid complex above the surface was unlike anything ever seen, the one beneath the pyramid was equally majestic.

Above the surface, the pyramid and its temples were encircled by a massive limestone wall nearly 11 meters tall stretching out across 1,645 meters and covering an area of 15 hectares. In other words, what the ancient Egyptians created beneath Djoser’s pyramid can be compared to an underground city built above a massive pyramid complex.

As to why the ancient builders went through the painstaking process to remove around 5,7 kilometers worth of tunnels, chambers, shafts, galleries, and magazines, Egyptologists usually agree that it was meant to be a representation of the King’s underground palace.

This superstructure was built even before the foundations of the pyramid were placed on the site. The builders would carve numerous rooms, tunnels, shafts, and chambers, as well as the burial vault which was made of granite, in order to design a palace worthy of a king in his afterlife.

According to Lehner, the entire complexity of the subterranean network evokes the watery associations of the Egyptian Netherworld.

The superstructure beneath the Pyramid of Djoser is a wonder unlike any before. Never before was something of that size attempted to be built, and never before did the ancient Egyptians manage to replicate it in the numerous generations that followed after Djoser.

The contents of the subterranean world are as mysterious as the entire pyramid complex above the ground.

It is fascinating to find that even though the superstructure beneath Djoser was worthy of a king, the remains of the Pharaoh were never actually discovered. By the time scholars had entered the vast underground world, the chambers had already been looted.

What experts did find were around 40,000 vessels. Strangely, inscriptions on the vessels revealed that most of them were not indented for Djoser, but for his royal ancestors. This means that the entire pyramid complex, as above the ground, so below it, was meant to tell a far more complex story than we’d ever imagined, one that aims to be preserved in the future without forgetting a rich repository of knowledge from the past.

And if there wasn’t enough mystery surrounding the entire pyramid complex already, archeologists have reported discovering the remains of an 18-year-old female which strangely dates back several generations before Djoser.

Although the pyramid complex of Djoser laid down the foundations for later pyramids and pyramid complexes in Egypt, not a single Pharaoh managed to match the size and complexity of Djoser’s subterranean world.

There is not a single pyramid complex in Egypt that features so many tunnels, chambers, shafts, magazines, and rooms. Not one pyramid complex other than Djoser’s saw so much material being removed beneath the surface in order to make way for an intricate subterranean world.

Why so many rooms? Why such a vast underground complex? Where are the remains of Djoser’s mummy? Who was the female who’s hip-bone was discovered beneath Djoser’s Pyramid, and how is it possible that she predates Djoser by several generations?

What was the true meaning of the underground complex built beneath Djoser’s Pyramids? These are all questions that remain unanswered but that tell us that whatever we thought we know about Egypt’s history, there much more we need to learn.