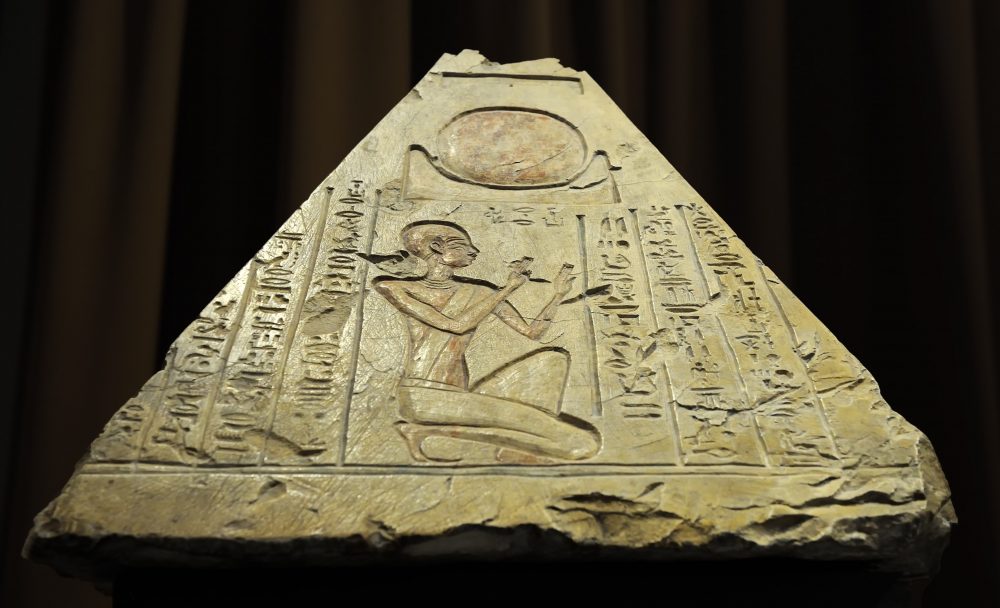 The capstone, or pyramidion, is the uppermost part of the Egyptian pyramid—after Djoser—and one of the main features of the smooth-sided pyramid and the ancient Egyptian obelisk.

Egyptologists maintain that around 4,500 years ago, King Khufu of the Fourth Dynasty commissioned a monument of never-before-seen proportions, the Great Pyramids of Giza.

Although there are no written records that tie the construction of the Great Pyramid of Giza to Khufu, and despite a total lack of blueprints of the pyramids’ construction, mainstream scholars have forced upon history books the belief of Khufu built the Great Pyramid as his eternal resting place.

The construction of the Great Pyramid of Giza is thought to have taken no more than 20 years, during which a large workforce quarried and stacked a total of around 2.3 million blocks of stone, the heaviest of which were quarried and then transported to Giza from Aswan, located approximately 800 kilometers of the construction site.

In total, it is believed that the Great Pyramid of Giza has a total weight of around 6.5 million tons. Although the tallest pyramids ever built, it isn’t by far the largest. This honor belongs to the Great Pyramid of Cholula, built halfway around the world in present-day Mexico.

A brief history of the Egyptian pyramid

If I am to follow the Egyptian pyramid’s mainstream history, then I’d have to tell you that it all started back during the Third Dynasty of Egypt, with King Djoser on the throne.

Around 4,700 years ago, it is believed that Djoser called upon his royal Vizier and architect Imhotep to come up with a never-before-seen monument that would stand the test of time. As a young architect eager to please his king, Imhotep likely spent countless nights planning in his head a type of monument that would satisfy his king. Djoser chose Saqqara as the location where this revolutionary monument was to be built.

Djoser wanted the structure to remain standing for generations, and Imhotep knew that he would need to build the new monument of much sturdier materials.

Imhotep did not disappoint. He most likely looked at the mastaba tomb when he envisioned a new kind of monument. After adapting some of the elements of the mastaba, Imhotep improvised. To build a monument that would stand the test of time, Imhotep knew he had to use stone.

Although some of the earlier structures in Egypt did have certain elements made of stone, there weren’t any structures built entirely of stone. At least not any that have been found to date.

This is why the Step Pyramid of Djoser is regarded as the earliest large-scale cut stone construction and the earliest colossal stone building in Egypt. The Step Pyramid design of Djoser marked a clear departure from previous, lesser forms of architecture. The Step Pyramid is seen as the most revolutionary structure in the history of ancient Egyptian architecture and is the first pyramid built in the land of Pharaohs. Nothing like it had ever been built before Djoser, who likely lived long enough to see his master plan come to life.

With a total volume of 330,400 cubic meters (11,667,966 cu ft), the Step Pyramid of Djoser was a monument of unseen proportions. This ancient pyramid is even larger than the third-largest pyramid at Giza, that of Menkaure built several generations later.

The Step Pyramid of Djoser kick-started the pyramid-building fever of ancient Egypt. Although many would expect that a long line of similar pyramids would follow Djoser’s Step Pyramid, this was not the case.

In fact, after the Pyramid Complex of Djoser, a few generations of Pharaohs passed by until Egypt saw the birth of another Pyramid.

The Step Pyramid of Djoser is the only completed pyramid during the Third Dynasty.

It wasn’t until the reign of King Sneferu in the Fourth Dynasty that another pyramid was completed in ancient Egypt.

This was likely the Pyramid of Meidum, an experimental pyramid that greatly influenced future pyramid-building techniques in Egypt. Just as Djoser, Sneferu, too, revolutionized architecture in ancient Egypt. The fourth dynasty king is regarded as the greatest pyramid builder in Egyptian history, having successfully built at least three great pyramids, the one at Meidum and the Bent and Red Pyramids at Dahshur.

Sneferu’s architects introduced several revolutionary features in pyramids’ buildings, the most important of which is the smooth sides that retired the Step Pyramid.

Sneferu’s Red Pyramids—the third-largest pyramids in Egypt—is the first successful “true” smooth-sided pyramid in Egyptian history. But in addition to that, it was likely the first pyramid with a capstone on top.

The capstone, or pyramidion, is the uppermost part of the Egyptian pyramid—after Djoser—and one of the main features of the smooth-sided pyramid and the ancient Egyptian obelisk.

In ancient Egypt, the pyramidion was called the benbenet, which draws associations between the pyramids and the sacred benben stone.

The benben was the mound that arose from the primordial waters Nu upon which the creator deity Atum settled in the creation myth of the Heliopolitan form of ancient Egyptian religion.

The pyramidion, capstone, and benben

One of the greatest enigmas surrounding ancient Egyptian pyramids—specifically the Great Pyramid of Giza—is whether it ever had a pyramidion.

Although the Red Pyramid’s capstone has been found and was reconstructed by experts, that of the Great Pyramid of Giza has not been discovered to date. Although experts agree it likely had one, the Great Pyramids capstone is missing, and its absence has fueled debate about whether the gigantic pyramid ever had one.

Placing the pyramid on top of a nearly finished pyramid was likely an act of great importance, nothing short of a sacred act in ancient Egyptian times. How this was achieved remains an enigma, just as it remains a complete mystery how some of the most massive blocks were placed into position.

Based on historical data, previous pyramids, and a massive space atop the pyramid, we can probably say conclude that at one point in history, likely after having been built, the pyramid of Khufu was topped by a massive capstone—now missing.

The Pyramid of Khufu, once it was completed, reflected the sunlight off its shiny white surface. It was bright, and some legends even say it shone like a star, visible from great distances. Such a beautiful monument surely had an equally incredible finish. Although it is possible that the pyramid was cased from bottom to top with polished limestone blocks—and therefore did not have a specific capstone—the chances are slim.

In my opinion, this is mostly because of its flat top. Today, the great pyramid has a mast pole where its pyramidion once stood. This was put there by a man called David Gill, who was an astronomer and not an archeologist or Egyptologist. Gill conducted early measurements of the pyramid, and the mast pole was placed there to aid in the measures and the attempts to calculate the pyramid’s apex.

Not many people have had the opportunity to see for themselves what its like atop the great pyramid of Giza, but in this article, I’ve gathered seven really amazing images of the Great Pyramid’s summit.

In my personal opinion, and after having read a plethora of information about the pyramid, both from renowned archeologists, Egyptologists, and different authors, I would say that the Great Pyramid must have had a glorifying capstone at its summit at one point in history.

Given that the Great Pyramid was the most amazing pyramid built in Egypt, I wouldn’t doubt for a second that whoever built it likely crowned it with either a golden capstone or one that was made of precious materials.

Where this capstone is today remains one of the greatest mysteries of the Great Pyramid.