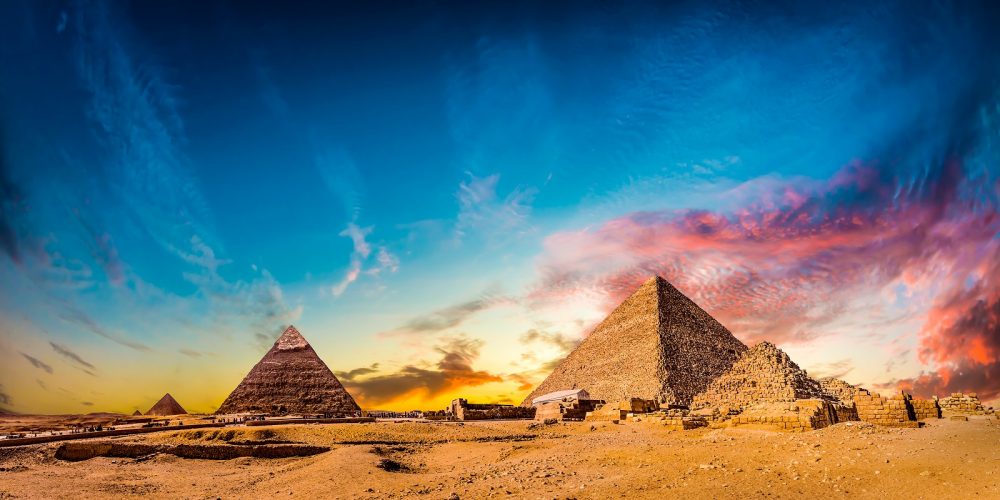 More than 4,500 years ago, some of the most impressive ancient Egyptian pyramids were built, and there isn't one ancient text that speaks of their planning, design or construction.

The Great Pyramid and its accompanying monuments, the Pyramid of Khafre and the much smaller pyramid of Menkaure, are the three main structures built on the Giza plateau in the distant past. The world-famous pyramids are the main tourist attraction in modern times but were also of great interest hundreds of years ago.

For centuries experts have tried deciphering the mysteries that enshroud them. We’ve studied them, measured them, and analyzed them in recent times with state-of-the-art technologies in an attempt to reveal their secrets.

But the pyramids, proud as they stand, remain uncooperative and continue to safeguard their secrets.

Of the three pyramids at the Giza plateau, the Great Pyramid of Giza has captivated humankind since time immemorial.

If you ask any traveler today which famous monument on Earth left the strongest impression on him, he would most likely say that the Great Pyramid, or the Pyramids at Giza. The reason may differ significantly.

žOne person would say that what he admires most about the pyramids is their megalithic size. Another would point out their architectural perfection and their intricate alignment. A third would say that their history alone is worthy of praise, while many others would point towards the many secrets of the pyramids.

Whenever one mentions the pyramids, the great pyramid of Giza springs to mind, even though Egypt is home to numerous other pyramids.

The Pyramids at Giza aren’t even the oldest of the Egyptian Pyramids.

The Great Pyramid of Giza, for example, is the result of a long generation of pyramid builders and developments in the architecture and design of these majestic structures.

The oldest of its kind

The earliest attempt to build a pyramid can be found at Saqqara, dating back to around 2,780 BC. It was there where Pharaoh Djoser chose to build his second monument. To construct it, he turned towards his youngest architect, a man called Imhotep, who had a series of revolutionary and refreshing ideas that Djoser recognized.

The Pharaoh gave the young architect free hands, and Imhotep started planning what would eventually become the first pyramid of Egypt; the Step Pyramid of Djoser. But the road towards Egypt’s first pyramid was not an easy one.

Innovative as the entire structure was, experts argue that the Step Pyramid was completed for more than ten years, during which it went through as many as six changes or additions.

The pyramid progressed from an initial square mastaba to the final structure we see today. As explained by Jean-Phillippe Lauer, the six stages of the Step Pyramid’s building were M1, M2, M3, P1, P1′ and P2.

If this theory is correct, it means that the architect made several significant expansions to the structure every three years; if we divide the six stages into the nineteen years, Pharaoh Djoser ruled over Egypt.

As the builders led by Imhotep started transforming the mastaba into the first Step Pyramid, they built a crude core of several disproportionate stones. They created a casing of fine limestone and a layer of packing in between.

Egyptologists say that this method is similar to mastaba building, but this time there was one distinction: the constructors decided to abandon horizontal beds and started building in accretions that leaned inwards. The transformation of the mastaba into a step pyramid saw builders use larger and better blocks of stone that no longer needed to be packed with mortar of tafla.

Essentially, Egyptologists suggest that the mastaba turned into a type of stepped structure, signalizing the departure of previous construction styles.

While all of this seems plausibly possible, there remains one massive enigma: if ancient Egyptians transformed mastabas into a different type of structure, why is it that we haven’t got a single written piece of evidence that tells us this was intended, and that this is a plan that the ancient builders would follow from start to finish?

Not one ancient text exists from the time of Djoser and Imhotep that mentions the revolutionary change in architecture.

Step pyramid was revolutionary, so why isn’t’ there one ancient manuscript that documents a revolutionary architectural change such as the pyramid?

This is relatively strange because of the significance of the entire pyramid complex.

But this weirdness would last.

A number of ancient Egyptian pharaohs came to the throne after Djoser, and many of them attempted to built–and replicate–the grandiose pyramid complex designed by Imhotep.

But it wasn’t until Pharaoh Sneferu–ancient Egypt’s greatest pyramid builders–that the world would have another pyramid worthy of amazement.

Under his Hellenized name Soris, Pharaoh Sneferu was the founding ruler of the Fourth Dynasty of ancient Egypt’s Old Kingdom. Father to Khufu–and thirteen other children– the Pharaoh who would eventually build Egypt’s most incredible pyramid, Sneferu was the man who would revolutionize ancient Egyptian architecture perhaps as much as Djoser.

The Pyramid at Meidum, credited to Sneferu, was perhaps ancient Egypt’s first, direct attempt at replicating the astonishing structure built by Djoser. That pyramid, however, was not a success, and it isn’t entirely clear what exactly happened to it during construction.

Egyptologists argue that the pyramid at Medium, initially a kind of Step Pyramid, collapsed as the builders tried changing its design from a stepped pyramid into a smooth-sided one.

The Pyramid at Meidum is essential for several reasons.

First of all, it marks, perhaps, a direct attempt at evolving the pyramid-shape introduced by Djoser.

The builders of the pyramid most likely saw, during construction, that they could build a pyramid with smooth sides, a kind of massive mound, rising towards the sky, mimicking the ancient Egyptian primordial mound.

Their attempt, although revolutionary, was unsuccessful.

But Sneferu would not give up.

Evidence of that is the Bent Pyramid at Dahshur. The ancient pyramid builders probably learned a lot about building techniques in the failed attempts at Meidum. Although they didn’t perfect their skills, they did just enough to start the right way.

Nearly halfway through the project, and despite their experience, they noticed that the structure was compromised and unstable because of its angle of inclination.

They decided, therefore, to reduce the angle in order to “save” the structure. The change in the slope of the pyramid was again revolutionary, and the builders would continue and finish the Bent Pyramid successfully.

In addition to the Bent Pyramid’s unique angle, the structure is unique among all other ancient Egyptian pyramids because–despite its age–it still retains most of its original polished limestone outer casing. According to British structural engineer Peter James, this is due to the larger clearances between the parts of the pyramid’s casing.

The Bent Pyramid, a structure believed to be at least 4,600 years old, marked the path for future ancient Egyptian pyramids.

The Red Pyramid at Dahshur would be ancient Egypt’s first triumphant attempt at building a “true” smooth-sided pyramid. Evidence that the builders of the Red Pyramid learned from previous pyramid-building attempts is the structures’ shallow 43-degree angle, which is the same as the builders of the Bent Pyramid used to finish the upper part of the Bent Pyramid.

Although it isn’t clear how long it took to complete, most Egyptologists agree that the Red Pyramid was built in no more than 17 years.  This, however, is pure speculation as there isn’t one single ancient text that mentions the planning, design, or construction of the Red Pyramid. Again, this is extremely strange as the Red Pyramid marked another important step in ancient Egyptian architecture.

Ancient Egyptian architecture evolved drastically in around one hundred years from the Step Pyramid. No one found the need to record the amazing architectural styles developed, redeveloped, and introduced to the world.

The Pyramids at Giza

After Sneferu, his son Khufu took the throne of ancient Egypt.

Just like his father, Khufu had revolutionary ideas. His ideas were fully understood by Hemiunu, Khufu’s royal architect, who is believed to have planned, designed, and built the most impressive pyramid Egypt would ever construct.

The Great Pyramid of Giza marked the zenith of ancient Egyptian pyramid building.

It was the most impressive pyramid ever built in ancient times, not only because of its impressive (original) height of 146.7 meters but because of its design–the only eight-sided pyramid in Egypt–and its mind-bending precision.

The precision embedded in the Great Pyramid is staggering: the relationship that exists between the Pyramid and the Earth is unsettling for some: if we take the Great Pyramid’s height and multiply it by 43.200,  we get  3938.685 miles, which is short of just 11 miles of the actual measurements for the polar radius of our planet.

But the same thing would happen after Khufu.

Pharaoh Khafre took ancient Egypt’s throne after Khufu and went on to built another impressive structure. Perhaps not as impressive as that of his father, the second-largest pyramid is another wonder of ancient Egyptian pyramid-building.

It was the second-largest pyramid of ancient Egypt with a height of 136.4 meters. Of the three pyramids at Giza, the Pyramid of Khufu is the only one with its top casing stones largely intact. Yet, strangely, just as is the case with the Great Pyramid of Giza, there isn’t a single text that tells us anything about the planning, design, and construction of the pyramid.

Menkaure then came to the throne and would continue the architectural revolution introduced by his ancestors. Although Menkaure did not accomplish building a truly massive pyramid, the structure he completed at the Giza plateau is important because it marked the end of the Pyramid building at Giza.

Strangely, just as with all previous pyramids, not one ancient text has been found to explain, detail, or even mention how the third-largest pyramid at Giza was built.

We have the three Pyramids of Giza, the result of more than a hundred years of ancient Egyptian pyramid building techniques, and not one single ancient text that mentions how and why these ancient structures were built.

But even before them, we have perhaps equally revolutionary pyramids that the ancient Egyptians did not mention in any of their historical sources.

The question remains; Why?