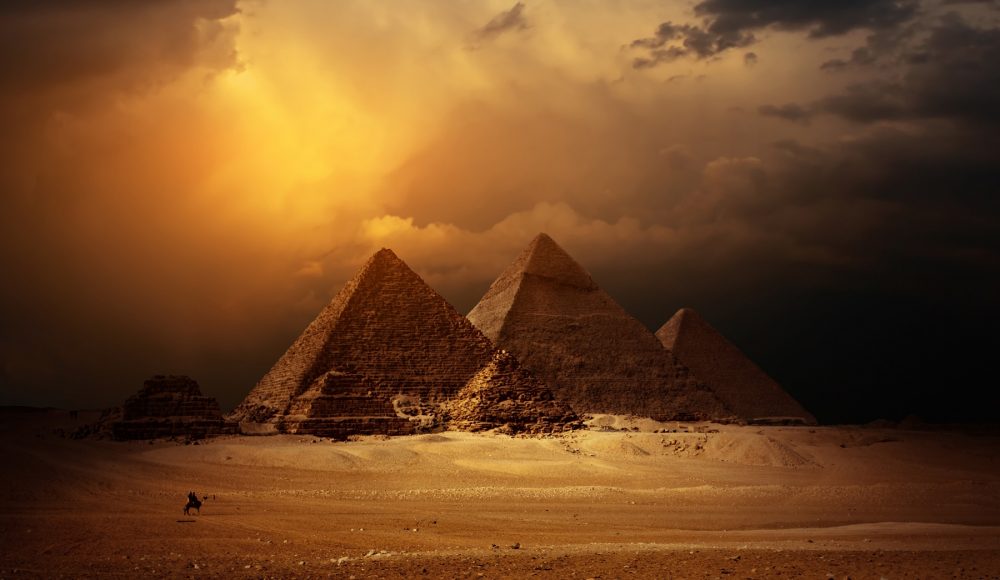 Not one ancient text mentions how exactly the pyramids were built, using what tools, what technologies. The only text that exists mentions the transportation of stone.

Although around 120 pyramids wer built in ancient times in Egypt, there is a complete lack of records that explain how the pyramids were constructed.

Egypt was the cradle of an ancient civilization that allowed the same basic language and culture to flourish for almost 3,000 years. For most of its extensive history, the word Pharaoh was used to describe the “Lord of the Two Lands,” a reflection of the natural division of the country into two inhabitable parts: the Nile Valley and the broad Delta. Each ancient Egyptian Pharaoh wore the double crown combining the Red Crown of Lower Egypt and the White Crown of Upper Egypt.

When it comes to ancient Egyptian pyramids, Egyptologists trace the origins of the majestic structures to the very modest pit graves that were built across Egypt during predynastic times. Then, somewhere at the threshold of the first dynasty, around 2,900 BC, the tombs were transformed and were built consisting of mudbrick boxes built into the desert floor and divided into several chambers.

The first two ancient Egyptian dynasties saw these types of graves built, and although nothing changed in their general shape, their complexity grew with each generation.

Egyptologists are convinced that the structures located far out in the desert near the high cliffs of Abydos in Egypt, marked by large stelae and covered by a mound, are the very architectural antecedents of ancient Egyptian pyramids.

The ancient tombs of predynastic and 1st and 2nd dynasty pharaohs are truly grandiose and monumental in size. Still, they are incomparable to the superstructure that would appear entirely abruptly during the third dynasty under the reign of Pharaoh Djoser, around 2,630-2,611 BC.

The Step Pyramid of Djoser at Saqqara heralded the classic pyramid age of ancient Egypt. During the centuries following Djoser, Egyptologists claim the Pharaohs of Egypt built pyramids in a 72-kilometer span of the desert, positioned strategically between Abu Rawash, just northwest of Giza, to Meidum south of Egypt, just at the entrance to Fayoum.

Excluding the pyramids built by Djedefre at Abu Rawash and Sneferu at Meidum, the 21 major Old Kingdom pyramids stand like guards in a 20-kilometers stretch west of the capital of Memphis, known in ancient times as the White Wall, Zawiyet el-Aryan, Abusir, Saqqara, and Dahshur.

Eventually, as ancient Egyptian pyramid building techniques evolved, Egypt would see the construction of the truly gigantic pyramids, structures which are thought to have been built during the span of just three generations: Sneferu, Khufu, and Khafre.

The Step Pyramid of Djoser marked the start of the entire process and is recognized as a revolutionary, unprecedented building of ancient Egypt. Believed to have been designed, planned, and built by Imhotep, the Step Pyramid Complex of Djoser is regarded as the earliest colossal stone building in Egypt and the earliest large-scale cut stone construction.

Djoser’s pyramid, a stepped structure resembling six smaller mastabas superimposed on top of each other, is believed to have been completed in six different stages. The builders added various elements to the structure.

Egyptologists argue that the Step Pyramid began as a kind of square mastaba that was gradually enlarged. It has been suggested that the builders may have used ramps in ancient times to raise many of the heavy stones to complete the pyramid, and various possible models have been proposed throughout the years. Egyptologists further say that the ancient builders most likely made use of rollers for transportation.

While all of this is plausible, it remains a profound mystery as to why there are no ancient texts that mention the entire construction process of the pyramids. Djoser created a revolutionary pyramid, and not one ancient text mentions the planning, design construction, or successful completion of a pyramid that forever changed ancient Egyptian architecture.

After Djoser, a few generations went by until Egypt saw another successfully completed pyramid appear. However, it wasn’t until Sneferu that this happened. The founding ruler of the Fourth Dynasty built three pyramids, one at Meidum and two at Dahshur, revolutionizing ancient Egyptian pyramid buildings along the way.

Sneferu’s pyramid at Meidum and the two structures at Dahshur alone contain more than 3.5 million cu. meters (124 million cu. ft) of stone. In other words, all other ancient Egyptian pyramids combined–excluding Queen and satellite pyramids–contain only 41 percent of the total mass of the pyramids of Sneferu, his son and heir to the throne Khufu, and his grandson Khafre.

Sneferu’s Red Pyramid at Dahshur, Egypt’s third-largest pyramid after the Pyramid of Khufu and the Pyramid of Khafre, directly laid down the foundations for the construction of the Great Pyramid. Yet, revolutionizing as it was, this pyramid too, as well as Sneferu’s other two pyramids, are absent from written historical records of ancient Egypt.

Not one ancient text has been discovered anywhere in Egypt that references or credits Snefru with having built the three pyramids. Likewise, there isn’t a single ancient papyrus, hieroglyphic inscriptions, or anything else for that matter that tells us how the builders managed to construct the pyramids of Sneferu and what technologies they made use of.

After Sneferu, his son Khufu took the throne of Egypt and again revolutionized pyramid building. It is argued among experts that Khufu commissioned what would eventually become the greatest pyramid Egypt has ever seen, the Great Pyramid of Giza, a unique structure in many ways.

Built with around 2.3 million blocks of stone, some of which were hauled as far away as Aswan, around 800 kilometers away, experts have estimated that the Great Pyramid of Giza weighs around 6.5 million tons. In terms of precision and alignment, the Great pyramid is unparalleled. According to scholars, the base of the Great Pyramid is level to within just 2.1 centimeters (under one inch).

Its average deviation of the sides from the cardinal directions is 3′ 6” of arc, and the pyramid’s greatest difference in the length of its sides is 4.4 cm (around 1.73228 in).

Its design elements are also unique; scholars have discovered that the Great Pyramid of Giza is the only eight-sided pyramid ever built in Egypt.

Furthermore, once completed, around 4,500 years ago, according to Egyptologists, the Great Pyramid of Giza remained the tallest manmade structure for approximately 3,800 years.

A true wonder of the ancient world, the complete lack of ancient texts, hieroglyphs, or written accounts of how the pyramid was built is one of the greatest mysteries in Egyptology.

Curiously, just as there are no written accounts of the Great Pyramid’s construction, there is a complete lack of records mentioning the construction of Khafre’s pyramid.