Astronomers using the VLT telescope complex have proved that the star system HR 6819 is a close binary, not a triple system. This disproves the presence of a stellar-mass black hole, which was previously thought to be the closest to Earth.

Most massive OB-type main sequence stars are in binary or multiple systems, among which close binary systems with an orbital period of less than 10 years are common. Stars close to each other are able to interact and exchange mass and angular momentum, which significantly affects their evolution and the end of life.

If the main body in the system is massive enough and the system survives both the interaction of the components with each other and a potential supernova explosion, then this could lead to the formation of a binary system with a compact object such as a black hole or a neutron star. Such systems are the first candidates for progenitors of high and low mass X-ray binaries.

Which is the closest black hole to Earth?

The authors of the work considered that HR 6819 is a triple system with a classical Be star orbiting a short-period internal binary system consisting of a B3 III star and an invisible companion in a circular orbit. The orbital period of the close binary is 40 Earth days.

The half-amplitude of the radial velocity of the inner star is 61.3 kilometers per second, which, together with an estimate of its minimum mass of 6.3 solar masses, gives a lower threshold for the mass of an invisible body of 4.2 solar masses. This suggested that we have a stellar-mass black hole that is not absorbing matter at the moment.

However, there was also an alternative idea, according to which the observational data could be explained without involving a black hole – a binary system consisting of an isolated B-type star and a rapidly rotating Be star.

A group of astronomers led by Julia Bodensteiner (Julia Bodensteiner) from the Catholic University in Leuven decided to find out which of the hypotheses is correct. For this purpose, the scientists analyzed high-angle-resolution observations of the system obtained using the GRAVITY receiver, installed on the VLTI optical interferometer, and the MUSE spectrograph, installed on the VLT telescope complex.

The MUSE data did not reveal a bright star in a wide orbit, while the GRAVITY data indicate the presence of a close binary system, where the components are separated by an angular distance of 1.2 milliarcseconds. In this case, the characteristic radiation Brγ associated with the disk of decretion (outflow of matter) of the Be star is observed.

Thus, HR 6819 is a binary star system that does not contain a black hole, and its proximity to the Earth makes the system a good target for studying stellar interactions and the formation of Be stars. 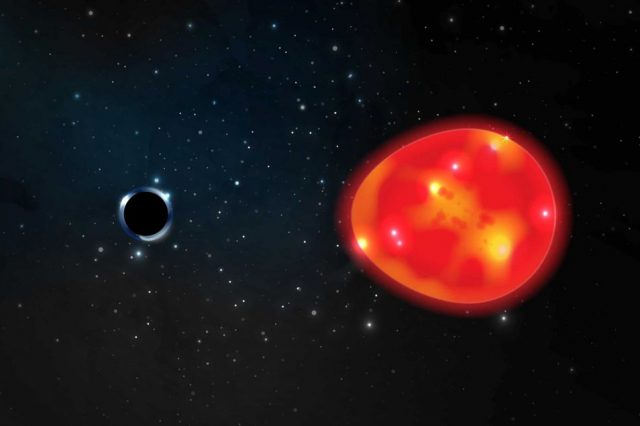